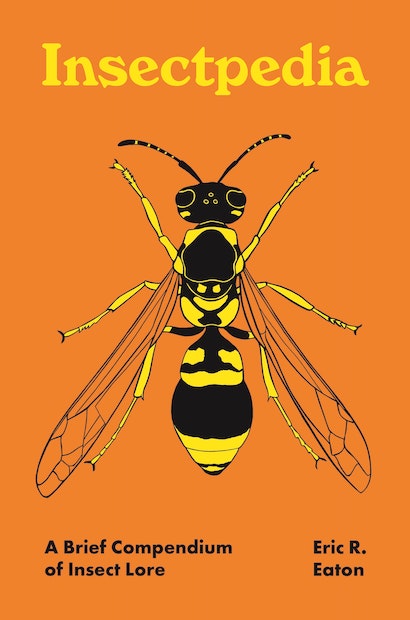 Insectpedia
Available in 2 editions
Buy This

Insectpedia introduces readers to the wonders of the insect world while inviting them to make discoveries of their own. Featuring dozens of entries on topics ranging from murder hornets and the “insect apocalypse” to pioneering entomologists such as Margaret James Strickland Collins and Douglas Tallamy, this beautifully illustrated, pocket-friendly encyclopedia dispels many common myths about insects while offering new perspectives on the vital relationships we share with these incredible creatures.

The word “bug” tends to make people shiver, or evokes an instinct to kill. How does Insectpedia overcome those impulses and invite the reader to reconsider their own attitudes?

ERE: There are legitimate reasons to fear and loathe insects that cause widespread death and misery, like mosquitoes and crop pests. You start by acknowledging that, and not begrudging or belittling anyone with a negative mindset. Empathy is, hopefully, an underlying theme of the book, but it also aims to expand the horizons of the average person who wishes to learn more. Pests are a fraction of the millions of species of insects, most of which we cannot live without. We are at last beginning to celebrate the positive ecosystem services provided by insects, like pollination of food crops, disposal of organic waste, and natural pest control, and quantifying that in the monetary sense. Meanwhile, insects influence every aspect of our culture and civilization, from art to cuisine to engineering and other scientific endeavors.

There are so many mind-blowing entries in Insectpedia! How did you decide on which to include?

ERE: Let us say that there are more than enough stories left over for a sequel. Entomology is full of fascinating discoveries, revealed daily in the scientific literature. Unfortunately, these stories rarely make headlines in mainstream media. Fact beats fiction, but when traditional journalists get ahold of something it is often sensationalized to the point of being damaging misinformation. I went with what I thought were the best stories for readers with little or no familiarity with insects, those stories with a dash of humor, and those that span or punctuate the history of the science. Who would not be intrigued by beetles that attempt to mate with beer bottles, or lacewing larvae that kill termites by belching toxic emissions from their hindquarters?

Entomology is a rapidly-evolving science. Has anything related to Insectpedia changed since it was published?

ERE: Yes! During the design phase, we learned that the Gypsy Moth underwent a temporary name change to “LD Moth,” for its scientific name Lymantria dispar. Since then, the name was permanently changed to “Spongy Moth,” for the spongy egg masses deposited by the female moths. The name change was initiated to eliminate the derogatory “gypsy” epithet that has been wrongly applied historically to the Romani people. The new name also complements the existing French name for the moth, in keeping with the European origin of the species. This is one small step towards eliminating racist slurs in the language of common names for organisms.

What was the most eye-opening fact you learned in researching Insectpedia?

ERE: There were many, but by far it would have to be how much of what we know has resulted from colonialism; and how little credit for advancing the science has been given to women and minorities. It is stunning how many truly great human beings, who also happened to have been entomologists, were ignored, had their work repressed or wrongly attributed to others, or been blatantly discriminated against. Only now are we beginning to shed light on their accomplishments, and I made it a point to include short biographies of those individuals who have flown under the radar. Respect for indigenous knowledge of organisms is still barely escalating.

How do you envision the future of entomology in light of what you learned in writing Insectpedia?

ERE: My hope is that we will see systemic, permanent changes in the culture of the profession such that there is a place for scientists of all demographic categories, from ethnic minorities to non-binary individuals. The young entomologists I interact with today demonstrate great promise in achieving that goal. Older entomologists who somehow feel threatened by these changes are slowly giving way to a much healthier culture.

My fear is that we will stay the course in our anthropocentric approach to our personal properties, and continue our addiction to “lawnscapes” and the chemical dependency necessary to maintain them. We need to make different personal choices, and demand the freedom to do so without risking citations from HOAs, and municipalities enforcing outdated codes like weed ordinances that prohibit planting native species in urban and suburban landscapes. An “insect apocalypse” can be averted if we make even minimal efforts to change our ways.

You share many stories related to economic entomology in Insectpedia. What does the road ahead look like for that aspect of the profession?

ERE: Most global problems are problems of scale, and nowhere is this more apparent than in farming and ranching. We need to shrink agribusiness and largely replace it with local agriculture, community gardens, and personal gardens. We in the Western world are guilty of expecting other nations to feed us first, then themselves. That must change. We need to reduce food waste at the consumer end. Pest control is going to be vastly easier on a smaller scale, with more room to experiment without catastrophic losses.

What is next for you? Will there indeed be an Insectpedia II?

ERE: You will have to ask my editor whether there will be another one, but I am looking forward to reading more books by other authors in this series. Each of them brings great passion to their books. I am also more interested in writing about urban natural history, about how economic systems mimic ecosystems, and why humans have such adversarial relationships with other species, and with each other. There is a great deal of biology behind all of this that we do not discuss because we do not wish to admit that we are animals, too. The older I get the more urgency I have in getting these conversations going!

Eric R. Eaton is a naturalist and writer whose books include Wasps: The Astonishing Diversity of a Misunderstood Insect (Princeton) and, with Gregory S. Paulson, Insects Did It First. He runs the blogs Bug Eric and Sense of Misplaced. Twitter @BugEric Amy Jean Porter is an artist, illustrator, and naturalist. She is the illustrator of Florapedia and Fungipedia (both Princeton).