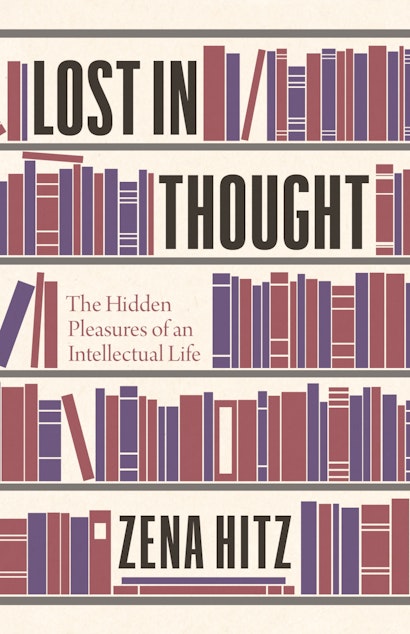 Lost in Thought
Available in 3 editions
Buy This

Like many professional intellectuals, books were my original escape. I was a strange child with abrasive manners, and real life was lonely and chaotic. I read ceaselessly, anything I could get my hands on. I read on the bus from school and got off, walking while still reading. My father and I went to the library on Sundays; there was an eight-book limit, so I took eight, and brought back the eight I finished last week. I laid waste to the rotating wire rack that held the young adult section and moved onto the fiction my parents liked.

In college I learned to read difficult books, to find a beachhead of clarity in a sea of words and to work my way out from there. Brutal honesty was required: if I didn’t understand something, I had to ask. Otherwise I’d be at sea in the classroom, nodding without agreeing, hearing without learning, caught in a pretense for which there was no honorable way out. Voicing uncertainty was the only way to connect. I developed a habit of uncertainty and then a taste for it. I discovered then that I could also get lost in puzzling through something, in finding patterns and parallels, tracking references, analyzing passages.

When I began trying to articulate the value of intellectual life, of reading and thinking, I was drawn to stories about the intellectual lives of prisoners. Consider Malcolm X, who was arrested in 1946 for theft and sentenced to eight to ten years in prison. At the time of his arrest, he lived a life dedicated to pleasures high and low: music, dancing, gambling, women, drugs. When he was released in 1952, he was a different man, impassioned and forcefully honest, devoted both to his new Muslim faith and to fighting for a better life for African-American communities. In the intervening six years, he had read most of the prison library: the Bible and the Qu’ran, Kant, Schopenhauer, and Nietzsche, and the histories of European and African peoples. He felt his old ways of thinking disappear, “like snow off of a roof.” He filled his letters with verse, writing to his brother: “I’m a real bug for poetry. When you think back over all of our past lives, only poetry could best fit into the vast emptiness created by men.” He described his time in prison in another letter as “a blessing in disguise, for it provided me with the Solitude that produced many nights of Meditation.”

There are many such stories: Andre Weil, Simone Weil’s brother, undertook a major mathematical proof while in a French prison in 1940; Antonio Gramsci produced voluminous writing, despite excruciating physical suffering, while imprisoned by Mussolini. Irina Rutushinskaya, a Russian dissident imprisoned in the 1980s, wrote poetry on bars of soap with matchsticks and washed it away when she had memorized it. She wrote out the poems on cigarette paper later to be smuggled to the West. The poems, the proofs, the notebooks, and the speeches cast a light that obscures the brutal suffering in which they originated. Through them we share indirectly in the escape that these prisoners found in themselves.

Much of the known world is now in enforced isolation, prying these stories loose to the surface. Isaac Newton, we are told, discovered calculus while quarantined, and Shakespeare managed to squeeze out King Lear in similar circumstances. And yet despite my years of intellectual training, and despite having written a book on the value of withdrawn inwardness, like most everyone else these days, I am unable to read seriously or to think. I am anxious and continually distracted. I would give anything to be able to lose myself in thought—but it feels impossible. What accounts for the gap between the determined, thoughtful prisoners and ourselves?

I can’t be sure, but I can speculate. The difference is surrender. To get to the inner depths, one has to give up on controlling one’s surroundings. For that, uncertainty has to give way to acceptance. We have to be able to say: “This is all there is, right now. What can be done with it?” But it is nearly impossible to say such a thing, much less to mean it, when we live and breathe uncertainty, when anxiety about the future is far more salient for us even than isolation.

We face an additional challenge that previous generations of isolati did not. Even apart from quarantine, a major sector of the economy is built to profit from our distraction. We live in environments designed in their smallest details to draw our attention, as Matthew Crawford catalogues in The World Beyond Your Head. Those of us (however privileged) who are able to work online have very little margin to escape. Anxiety is the perfect engine to churn the seamless slurry between our metrics-driven work and our chosen distractions. Our screens wall us off from ourselves.

T.S. Eliot warns that “human kind cannot bear very much reality”, and he is right. Distraction can be medicinal or wise. Nor can we continually punish ourselves for not having the discipline to recover elements of our education that might help us, or for not turning to our own library with the determination that Malcolm X took to his. What then can we do?

We can lower our expectations for ourselves, and face our anxious uncertainty with honesty and courage. We can seek out a beachhead, a base of operations, a time of peace however small, and work our way out from there. That said, the surrender that we need is frankly a gift of grace.

Fortunately, grace runs in channels. We will run ourselves down. The ultimate moment of exhaustion and despair may furnish the seed that blossoms into a new focus. Beyond the screens lie realms of wonder, truth, and connections with others that reach to our depths. We all know this. Let’s face each moment with all the clarity we can muster and wait for the door to open.

Zena Hitz is a Tutor in the great books program at St. John’s College in Annapolis, Maryland, where she also lives. She has a PhD in ancient philosophy from Princeton University and studies and teaches across the liberal arts. Website: zenahitz.net Twitter @zenahitz