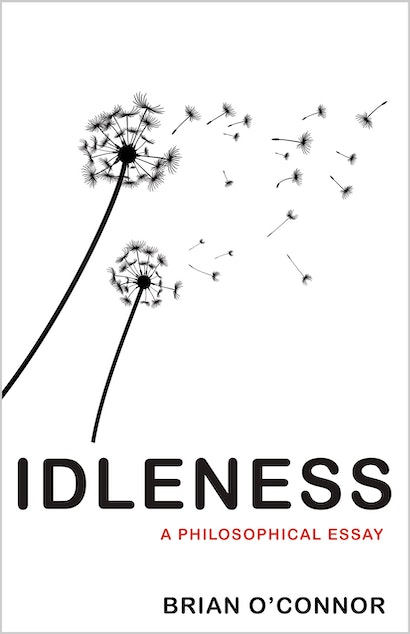 Idleness
Available in 3 editions
Buy This

Most of us probably never realized the speed with which large elements of the familiar world could disappear. Governmental orders have required changes in behaviour, changes that have generated remarkably similar kinds of experience across the globe. Obviously enough there’s a sudden nervousness of strangers. And at the same time social distancing practices pose a challenge to our instincts. The notion of home as a haven is now coloured by the idea that it might also be a place of confinement, or a quasi-clinical venue if we’re expected to self-quarantine there.

Changes in the structure and pattern of the working day are perhaps the most fundamental new experiences of all. Significant numbers of people, whilst not exactly idle, have found themselves with lots of what is usually thought of as idle time. This has fallen to the privileged group of workers whose livelihoods have not been jeopardized by the sudden economic downturn. Nor are they facing perilous conditions in healthcare environments. These are white collar professionals, now operating from home, finding more freedom within the working day than ever before. And curiously that new freedom does not prevent the work from getting done.

One might guess that the lack of physical proximity among colleagues attenuates the usual productive dynamic. Employers, for their part, may worry about the loss of ideal conditions in which initiatives can spring into life, with each worker attempting to extend themselves, win recognition and outdo the other whilst carefully curating their status as a team player. In any case, a drop in the frenetic pace of work for this sector is widely reported.

Employees whose professional discretion is strictly curtailed have found the transition to working from home rather less rewarding. By taking their routinized jobs – for example, call answering, basic financial servicing – into their homes the cordon that separates work from what’s better in life is transgressed. Surveys reveal higher than usual levels of stress among this group.

Some within the more fortunate group identify their new-found idle time as a revelatory contact with the ‘real’. That contrasts with ‘the artificial’, all those completely forgettable yet pressing demands that fill any taxing occupation. Time has been freed-up for, among other things, resting, chatting aimlessly, and enjoying neglected pleasures.

Used correctly, they hope, this crisis can be an important historical event, the beginnings of some kind of social transformation where a greater level of idle time is positively supported. Let us determine work, not be determined by it, the thought goes.

That new experience brings a sharper dimension to the familiar question, ‘how did we all become so busy?’ The focus is: ‘how did we forget what was important?’ It’s quite tempting to see this new experience as a pivotal learning opportunity. Indeed, spiritual leaders and political thinkers urge us, in their differing manners, to see it as such. Used correctly, they hope, this crisis can be an important historical event, the beginnings of some kind of social transformation where a greater level of idle time is positively supported. Let us determine work, not be determined by it, the thought goes.

Are we actually living within an historical event, rather than a passing but notable moment in history? Those who believe it is an event see the current crisis as a striking, new, and irreversible development. It has brought about a change in consciousness, one that mandates lasting change.

But what is this historical event, this crystallization of trends whose time is up? What certainly isn’t subject to rationing are the ready-to-wear ‘meaning’ narratives of people who see the crisis as proving the point of something they have long blithely espoused. But there’s another perspective: the variegated experiences of each one of us. And when we look at what different individuals due to personal temperament, socialization and group membership, family circumstances, or type of employment are going through the picture is complex. For many there is no ‘meaning’ to the current crisis. It has been a meaningless interruption. Lessons may be learned about how to prepare for the next pandemic, ranging from more decisive governmental action, speedier welfare compensation, improved healthcare systems, to the development of medications. But a new way of life is not anticipated.

Increasingly the group best placed to enjoy idle time has begun to find it boring to be away from work in its usual form. There’s a self-consuming process here: the very freedom we gain in idle time comes to be oppressive.

Those practical priorities place limits, one might think, on how far we can go in facilitating more idle time. Practicalities are not, however, nor ever have been, the main reason idleness doesn’t have greater prevalence or value. We can, in fact, witness that reason visibly unfold now (at the time of writing). Increasingly the group best placed to enjoy idle time has begun to find it boring to be away from work in its usual form. There’s a self-consuming process here: the very freedom we gain in idle time comes to be oppressive. Newspapers attract readers with columns listing ways to avoid boredom. The recommendations boil down – with abysmal though unintended irony – to finding new ways of keeping busy. The initial appeal of more idle time – less visible productivity, more of private pleasures – is losing its innocent charms.

This development will surprise only those who don’t really appreciate the formidable reach of the work ethic and its contemporary pathology the performance ethic. We shouldn’t deny – even if it’s a little humiliating – that there’s a kind of gratification offered by many of the petty features of a busy job. In that sense we can’t pretend to be brutalized victims of an external compulsion. But nor would it be right to call it internal and natural.

In essence, socialization in contemporary industrial and commercial societies is fundamentally geared to eradicating the appeal of idleness. From the earliest, tortuous days of education we’re trained in the self-discipline required to complete tasks. As a consequence, we find it difficult as we reach maturity to be at ease with activities without objectives or to drift around off our own resources. Boredom is quick to assert itself in creatures made for work. Accomplishing a task may – with the right formation – come to be satisfying in itself. Beyond task completion there’s a further work-type satisfaction that’s a powerful drive of contemporary life. It involves winning prestige or recognition: visibility that matters. This is a deeply socialized capacity. And it is, as Hegel among others has claimed, a route to personhood. The social person values work because it allows them to be visible, disciplined actors contributing to the needs of others through the completion of respected tasks.

Personhood, in that sense, is not a thing. Rather it’s a process in which we’re enveloped. It’s not clear how it can be reconstructed once largely formed. And it substantially exists within a network of norms that have given rise to our super-productive age. Over decades those norms have demonstrated their resilience, surviving the worst of every human catastrophe. They lay claims upon a personhood whose habits they’ve done much to form. We can glimpse beyond those habits from time to time. That’s evident from some of what has been experienced during the present crisis. It will be interesting to see how those more leisurely days will be remembered once that crisis has passed. If I’m not mistaken about the reaches of our socialization they will leave little trace at all.

Brian O’Connor is professor of philosophy at University College Dublin. He is the author of Adorno and Adorno’s Negative Dialectic.