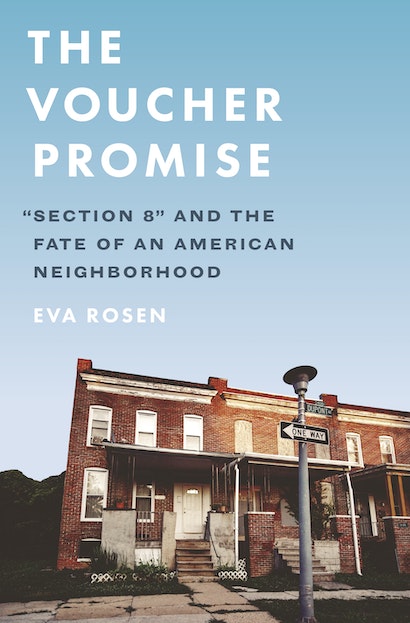 The Voucher Promise
Available in 3 editions
Buy This

Housing vouchers are a cornerstone of US federal housing policy, offering aid to more than two million households. Vouchers are meant to provide the poor with increased choice in the private rental marketplace, enabling access to safe neighborhoods with good schools and higher-paying jobs. But do they?

The Voucher Promise examines the Housing Choice Voucher Program, colloquially known as “Section 8,” and how it shapes the lives of families living in a Baltimore neighborhood called Park Heights. Eva Rosen tells stories about the daily lives of homeowners, voucher holders, renters who receive no housing assistance, and the landlords who provide housing. While vouchers are a powerful tool with great promise, she demonstrates how the housing policy can replicate the very inequalities it has the power to solve.

What motivated you to write a book about housing? Why is housing so important?

Eva Rosen (ER): When we think about so many problems we face in this country today—poverty, inequality, joblessness, and even a global pandemic—access to stable housing is at the root of so many of them. Historically and currently, there is no right to housing in this country. In fact, we have a huge affordable housing crisis. As rent prices have risen in recent decades, incomes have stagnated. Large swathes of the American population don’t have access to stable housing. And I don’t just mean the homeless—of whom 568,000 were counted on a single night last year. There are 2.3 million people evicted each year. A quarter of renters, or nearly 11 million households, pay more than they can afford for the homes they live in, over half their income in rent. Three out of four poor renters don’t receive any housing assistance at all. All of this gets exponentially worse in times of crisis and historic economic upheaval like the one we are living through now.

When I first went to Baltimore, I saw poverty that would be unimaginable to a lot of Americans who assume it only exists in developing nations. Residents in Park Heights—the neighborhood I got to know over more than a year—face extraordinary poverty. Life expectancy is almost fifteen years lower than in affluent, white areas of the city. One in three households lives under the federal poverty line. Unemployment is rampant. Despite the drastic drop in crime across the country, the crime spike of the 1980s and 1990s has only partially abated in neighborhoods like Park Heights. For the last several years, incidents of police brutality and ensuing unrest from Ferguson to Baltimore have brought America’s attention to communities like Park Heights, and raised questions about underlying issues of poverty, unequal housing, and patterns of economic and racial segregation in the U.S. Housing is not a panacea, but it is a tool that can stabilize communities suffering from many different kinds of crises.

How do we provide housing for people in this country? What kinds of housing programs exist? How do vouchers fit in?

ER: There are a couple of ways in which we provide housing for the poor in this country. People may be familiar with public housing, which is important infrastructure that helps a lot of people—over 1.5 million households—keep a roof over their heads. But it has its downsides too. Folks who live in public housing usually don’t get to choose where they live. Public housing has a history of being built in poor and segregated neighborhoods, where jobs can be hard to find. Plus, research shows that living in disadvantaged neighborhoods—like the kind public housing is often located in—has adverse effects on school outcomes, earnings later in life, and even the likelihood of getting married.

In recent decades, housing vouchers have come to be an even bigger program than public housing, subsidizing the homes of more than 2.2 million households across the country. A household that receives a voucher pays 30 percent of their income in rent, and the housing authority pays the rest directly to the landlord. What’s unique about vouchers—when they work the way they are supposed to—is that they allow families to choose any affordable home in the private market. Vouchers offer a way out of some of the problems that I mentioned public housing faces—when all goes well, recipients can make a choice about where they want to live, and may have access to safer, more economically stable neighborhoods.

When a family gets a voucher how does their life change?

ER: Above all else, vouchers provide people with homes. By making up the difference between what families can afford and what housing actually costs, vouchers create housing stability for millions of Americans. Studies consistently show that the program improves housing affordability, reduces homelessness, and alleviates overcrowding. These successes should not be understated, especially in an era when many government programs for the poor are being cut. A housing voucher is one of the largest subsidies a poor household can be lucky enough to receive, often worth over $7,000 a year. Housing vouchers lift over a million people out of poverty every year.

But vouchers can also do something more. They can offer people options: the choice to move to a neighborhood where they aren’t afraid to walk outside or where their children don’t have to navigate gang activity on the way to school. And vouchers can offer people the flexibility: to move for a job, to switch their child to a better school, or to escape a neglectful landlord. This flexibility is something that many middle-class families take for granted.

In what ways do housing vouchers fall short?

ER: By implementing the shift toward vouchers, many policymakers hoped that the program would promote social mobility. They thought that the private market would be able to provide safer, better quality homes. And by allowing families to make a choice about where to live, they hoped families could access homes in a wider range of neighborhoods, lower poverty, less crime, higher-performing schools, and better jobs, possibly providing a pathway out of poverty. They even hoped it might help to remedy the concentrated poverty and segregation that generations of policies had helped to create.

But while the program has been successful in providing housing, it falls short of creating mobility. A significant portion of new voucher holders—around a quarter—lease in place, meaning they don’t use their voucher to move to a new home. Of those who do move, many have not been able to find places to rent in mixed-income neighborhoods, the kind of move shown to have long-term positive impacts on health and economic well-being. Instead, many voucher holders live in poor neighborhoods. This is especially true for black voucher holders, whose neighborhoods are also racially isolated than those of white voucher holders. It is particularly concerning, given the long history of socioeconomic and racial segregation in housing in the United States, that housing vouchers seem to be mirroring long familiar residential patterns. It’s clear that voucher holders are unable to access a full range of options in where they live.

So, why do voucher holders tend to end up in poor neighborhoods?

ER: The voucher program’s secondary goal of providing the poor with more choice in where to live is based on an underlying assumption that historical patterns of racial and class segregation can be addressed by providing people—particularly low-income people of color—with more options. This assumption evokes the notion of “choice” that comes to mind when we think of middle-class people’s housing options (the kind of home searches we see on HGTV). But, the reality is different. The first reason has to do with where housing is located in the first place. Since affordable rental units that qualify for the program are mostly concentrated in low-income neighborhoods, it isn’t surprising that these are the places where voucher holders are most likely to end up.

Second, landlords play an important role. The program is highly stigmatized and landlords frequently discriminate against voucher tenants. Many landlords assume they are black, especially in a city like Baltimore. Some landlords are outright racist, and others know their other tenants are, and worry about “upsetting the neighbors.” What’s more, many cities and states don’t have adequate legal protections for voucher holders. There is no national law preventing a landlord from discriminating against a voucher holder, the way that race, gender, and religious background are protected classes. Finally, landlords who do rent to voucher holders tend to be those with properties in more disadvantaged neighborhoods where they have a bigger financial incentive to rent a voucher holder. They use targeted tactics to attract voucher holders to their properties, such as standing outside the housing voucher office to recruit tenants on their way out the door and offering move-in cash bonuses.

Landlords’ motives are aligned with their bottom line, not necessarily with the greater good. As housing programs increasingly rely on the private market to house the poor, we see how the scaffolding of the private market stratifies housing voucher recipients, mirroring decades-old patterns of racial segregation. Due to the lack of legal protections for voucher holders, the persistence of racial discrimination, and the role of landlords, “choice” among voucher holders remains largely a fiction. The potential is there, but it is unrealized. All of this points to the failure of the market as a system in and of itself capable of fixing the problem.

Should we throw this program out and try to create something totally different? Or are there things we do to make vouchers work better?

ER: Housing vouchers aren’t perfect, but they are one of the nation’s most important antipoverty programs. There are policy fixes that could be implemented to make them work better to reduce inequality. For example, federal law should be passed preventing landlords from rejecting tenants simply because they have a voucher. And, a recent rule change allowing voucher recipients more money to live in better-resourced neighborhoods should be implemented more widely. That said, vouchers can’t solve everything—we also need to invest in poor neighborhoods themselves. The burden of integration should not solely be in the shoulders of poor people of color.

We shouldn’t let these limitations get in the way of expanding a program that does so much good to keep people stably housed. The most important change we can make to the program is simply to fully fund it, so that it can help everyone in these trying times.

Eva Rosen is assistant professor at the McCourt School of Public Policy at Georgetown University. She lives in Washington, DC. Twitter @eva_rosen