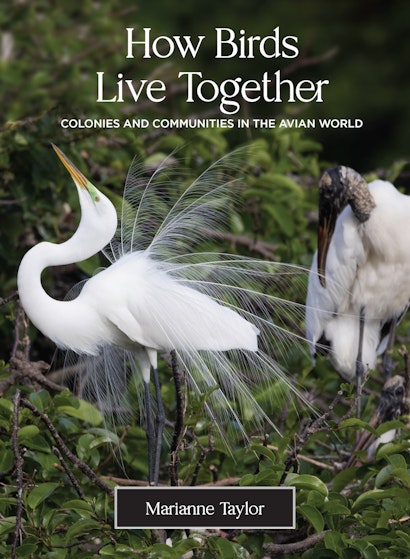 How Birds Live Together
Available in 2 editions
Buy This

When we watch a big flock of starlings or shorebirds performing their swirling pre-roost aerobatics, the expression ‘safety in numbers’ might come to mind. In the air, moving together, each individual bird reduces its chances of being a target if a predator comes along. Later on, huddling close through a long, cold night means sharing body heat and saving energy—more chance of making it to dawn.

So far, so mercenary, but it gets worse. Inequalities are revealed in the positional shuffling that goes on as each bird tries to improve its chances relative to the others. The strongest, most dominant males in a flock of North American red-winged blackbirds push their way to the safer, more sheltered centre of the group, both on the wing and when it’s time to sleep. The others—the females and especially the younger males—are forced to the periphery and left out in the cold.

None of this is very surprising. We expect birds to be instinctively self-serving, without the capacity for much more nuance than that. We understand that they ‘want’ to ensure that their own genes survive and proliferate, so they act selfishly. They share a proportion of those genes with close family members, so may compromise their own interests to protect those of their offspring or their clan, but there is simply no reason to form any kind of social bond with an unrelated individual.

Yet birds do form such bonds. In fact, there is compelling evidence that domestic chickens and guineafowl—neither of which are noted for their mental sophistication—have preferences about who they spend their time with, and these can develop into enduring friendships. Vulturine guineafowl roost in tree branches for safety, in large flocks. At dawn, they begin their day of terrestrial foraging. The flocks break up into smaller parties, and it is always the same individuals in each party. This shows that they can recognise one another, and with group sizes of up to 65, that’s a lot of faces and feathers to remember. They trek across the east African savanna together every day, covering up to 15 km, and unlike most bands of travellers, they never quarrel.

This degree of peaceful social stability is unusual among birds, but even among those that regularly chop and change their wider social group, there are often enduring associations between two or a few individuals, which we could define as friendships. Many birds form winter flocks and then separate into territorial pairs when the breeding season begins. Those in neighbouring territories are rivals, on the face of it, but a study on the great tit (a European songbird) has shown that these birds prefer to have their closest winter flockmates as territory neighbours, rather than strangers. They even establish their territory shape to maximise the length of territory boundary that is shared with a winter friend. This implies that the co-operative element of the relationship between territory neighbours may be very important. Although territory-holders defend their boundaries from intrusion, the time may come when they need to join forces, to warn one another of danger. Better, in these circumstances, to team up with a friend than an enemy.

Co-existing socially is indeed about more than hiding in the crowd or fighting your way to the top. Friendships can be important in surprising ways. A recent study on Australian magpies, in which some wild birds in a group were fitted with backpack-like tracking tags, was foiled when one untagged bird set about removing another’s tracker. She, or other females, went on to free all of the tagged birds in the experimental group. The gadgets are designed to stay firmly put for months or years, and have been used successfully on a wide range of species from ibises to ospreys. However, the researchers reckoned without the bill-and-claw dexterity of these sociable birds. Whether the magpies were just investigating an unfamiliar object or actively trying to help rid one another of an impediment remains to be seen, but it is a possible example of ‘rescue behaviour’ and a sign of high-level social interdependence.

Reciprocal helping is also known among ravens. These highly intelligent birds demonstrate a wide range of cognitive skills that place them in the very highest echelons of clever animals, and when two ravens (who may or may not be related) put their heads together and forage co-operatively, their success is more than double that of a lone bird. They also watch and learn new food-finding techniques from one another, behaviour that forms the basis of cultural transmission with all its social benefits.

Friendships between individual animals are known to also function as strategic alliances. This is well-known among mammals that hunt and breed in groups—for example, a matriarchal spotted hyena maintains her position at the top by having more and better allies than her rivals, enabling her to prevail in any disputes. In birds, the best-known alliances are probably those between males of species that display communally (lek) to an audience of discerning females. Male long-tailed manakins, which are small forest birds native to Central America, display in groups of up to 15, but within this assemblage are duos and trios of males who work together, performing a synchronised song-and-dance routine that would put many a boy-band to shame. Long-term studies show that these groups are often stable over many seasons. The ‘alpha’ in the pair or group is the only one who actually gets to mate, but on his death the beta (or one of them) will take his place. Young males, without an alpha to mentor them, often switch display partners but will preferentially stick with those that they have partnered before, and in this way new lasting alliances are formed.

Some birds certainly are lone wolves (so to speak), and those that live socially have plenty of conflict to navigate, but there is a plethora of evidence that a range of species do form non-random reciprocal social bonds—and that these bonds function in similar ways to the friendships that we humans enjoy. For us, lasting and supportive friendships have a tremendous positive impact on our lives, demonstrably improving physical and mental health and longevity. An awareness of the existence of friendships among wild birds can only enhance our empathy for them. And for the birds that we have brought into our own lives, such as domestic chickens, recognising and supporting their need for long-term friendships allows us to greatly improve their lives too.

Marianne Taylor is a freelance writer, editor, illustrator, and photographer. She has authored more than thirty books on natural history, including The Gull Next Door (Princeton) and The Story of Life in 10 1/2 Species.