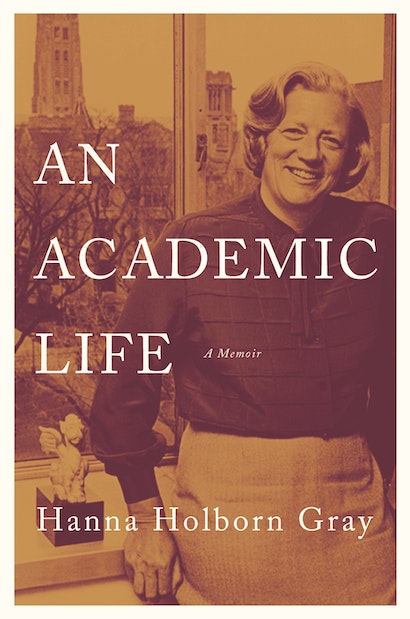 An Academic Life
Available in 2 editions
Buy This

Hanna Holborn Gray has lived her entire life in the world of higher education. The daughter of academics, she fled Hitler’s Germany with her parents in the 1930s, emigrating to New Haven, where her father was a professor at Yale University. She has studied and taught at some of the world’s most prestigious universities. She was the first woman to serve as provost of Yale. In 1978, she became the first woman president of a major research university when she was appointed to lead the University of Chicago, a position she held for fifteen years. In 1991, Gray was awarded the Presidential Medal of Freedom, the nation’s highest civilian honor, in recognition of her extraordinary contributions to education. An Academic Life is a candid self-portrait by one of academia’s most respected trailblazers. It speaks to the fundamental issues of purpose, academic freedom, and governance that arise time and again in higher education and that pose sharp challenges to the independence and scholarly integrity of each new generation.

Why did you decide to write a memoir?

HG: In part because a number of people suggested that I write something about my experience as president of a research university and about my time more generally in higher education, given my long involvement in the academic world. I began teaching some 65 years ago and had grown up as a faculty child, my grandfathers and aunt were also academics. My parents were refugees from the Hitler regime, and I was interested in memorializing them and their exiled colleagues and in analyzing the difference the exiles had made in the American academic environment. I was interested also in reflecting on what it had been like to be raised in and to be the beneficiary of two cultures.

What is important about the Central European academic refugees?

HG: The refugees from Hitler’s Germany, who began to arrive in 1933, represented very different fields of scholarship and science, and their considerable influence on the disciplines of learning in America varied accordingly. The impact was greatest where the ground had been prepared for their introduction of intellectual approaches and subjects that had not been widely adopted in the U.S. but which scholars and their universities were anxious to take up and incorporate into their programs. What the academic refugees as a group, however varying their academic offerings and specializations, brought to American higher education, was a cosmopolitan intellectual outlook, a breadth of culture and scholarly background, that helped transform a somewhat parochial academic world into a deprovincialized outlook and to international leadership in higher education. The European professors were models of a broadened and deepened culture to their students; their research opened new vistas in the fields they studied. At the same time, the European professors and the work they pursued were themselves greatly influenced by their new environment.

How was your life shaped by your parents’ immigration?

HG: I was lucky in countless ways. My family’s early escape from Germany in 1933, my father’s already finding a position at Yale University in 1934 and receiving tenure there after a few years, meant that my family was more settled and my childhood more stable than was the case with many of the exiles. At the same time, I observed my parents confronting the inescapable difficulties of exile—understanding and adapting to a new culture, managing life in a new language (my father had to learn immediately to lecture with his imperfect English in an undergraduate setting foreign to his experience), establishing some financial security while never regaining a former prosperity, adapting to a changed social status and social environment, overcoming homesickness and separation from extended family, caught in anxiety over what was happening in their home country and to the people they cared about. My parents worried about their children being drawn to American popular culture, which they found difficult to tolerate (although they liked just about everything else in America). They encouraged our learning English even while sometimes saddened by hearing us chatter away in our new language, and they ensured that we would retain our German. So we lived in a German-speaking household with German cuisine and an emphasis on high European culture, on educational achievement, and on the priority of intellectual pursuits. To live in two cultures while wanting to be as like one’s American schoolmates as possible could be a source of tension, but it was an extraordinary gift that, as I came increasingly to see, enriched my life and my perspective. To be a little bit different was not a bad thing, given the slightly unusual path I ultimately chose.

Why did you become an academic?

HG: Although I was determined in my youth not to follow in the footsteps of my parents and other relatives, not to become a teacher or an academic, I found already in my sophomore year in college that I wanted to be a historian, that the study of the past and understanding the present through the ways in which it had historically developed seemed my natural way of thinking, and  also the most interesting study imaginable. I think I was influenced in my decision to some degree by the models of my teachers at Bryn Mawr College.  My historian father never pushed or encouraged this direction, but of course he was a model also. To become a historian was to become an academic, and I was increasingly engaged in coming to know and becoming involved in the academic institutions in which I studied and taught, in their missions and in the powerful need to strengthen and preserve those as they were threatened or distorted in times of crisis or complacency.

What have been the principal changes and continuities for higher education you describe over the course of your career?

HG: There have been very large changes since the thirties and especially since the end of World War II. The war saw the emergence of the essential partnership between government and the universities for the purposes of conducting major research, above all in the sciences. The end of the war saw the G.I. Bill of Rights. The first created  basis for the federal government’s support of areas that require both major investments of resources and highly trained experts in science and in other fields deemed to meet major public needs and the national interest. The G. I. Bill represented the beginnings of the greater democratization of higher education and of broadened access to its institutions; with that came a demographic change in the makeup of its student bodies and the backgrounds of the faculty. The end of the war saw a new international outlook on the part of American higher education and an explosion of growth in every part of the university world that brought American universities to the forefront of accomplishment and prestige. Higher education underwent a period of immense expansion and unprecedented prosperity. All this rested on a faith, pervasive in the postwar world, in the potential for education to create a better world and to produce both social mobility and a meritocratic society that would realize the true promise of democracy. That faith in education began to ebb as resources for its support began to decline and to be shifted toward other priorities, including those of elementary and secondary education. At the same time, as Increasing numbers of women entered higher education, and coeducation increased.  The burgeoning civil rights movement drew attention also to the need to bring minority students and faculty into higher education as well as to improve opportunities for women and lower income students. As the federal government entered this area of policy with its affirmative action requirements, as happened earlier in the areas of student and project support, new conflicts arose in university-government relation over the dangers of political intrusion into university affairs. The sixties saw an outburst of student radicalism and demands for higher education to become more “relevant” in addressing social problems and for students to obtain a strong voice in university governance; the time saw also a proliferation of curricular developments that focused on new areas of study such as women’s  and African-American and non-Western studies. The following decades witnessed periods of economic expansion and contraction and of an increasingly intense and not always healthy competition among its different institutions. As the costs of higher education grew, and as questions of educational quality and outcome and even of the worth of higher education came more and more to be raised, the public’s attitude toward universities became more skeptical and critical. Universities adopted a more consumerist style as they sought to satisfy their constituents and to recruit students in a highly competitive environment.  At the same time, they were being asked to prepare students for the world of work and to design programs more oriented toward that end. In the wake of these concerns, the traditional liberal arts have come increasingly under siege.

But the continuities that have marked higher education over the years are equally striking. The history of universities is a history of recurrence: the same basic questions and dilemmas re-emerge for reconsideration and debate over and over again, but in new contexts. The issues of academic freedom, its definition and sustenance, of free expression and discussion, of the university’s role in political and social matters, of its institutional autonomies and their limits may take new forms as they occur, but they are the same basic issues that have dominated the lives of universities forever. Today’s disputes over academic freedom and over free speech and its limits on our campuses represent one, and a highly significant, version of that. On the international front, too, we continue to witness countries in which the repressive treatment of universities by authoritarian regimes threaten their existence. For universities, too, the age-old issues of their role in both teaching and research and the balance between those missions continue to provoke fierce debate as the institutions seek understanding of their larger purposes and their contributions to the social order.

Hanna Holborn Gray is the Harry Pratt Judson Distinguished Service Professor Emeritus of Early Modern European History at the University of Chicago, where she served as president from 1978 to 1993. She is the author of Searching for Utopia: Universities and Their Histories. She lives in Chicago.