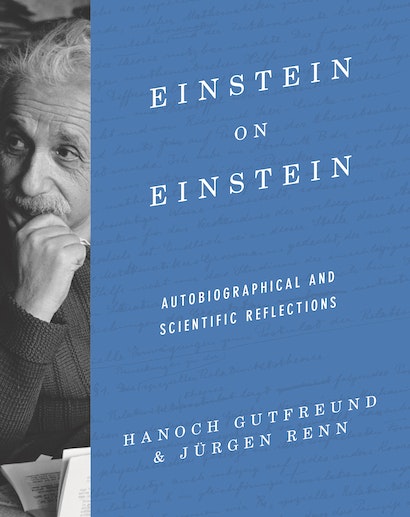 Einstein on Einstein
Available in 2 editions
Buy This 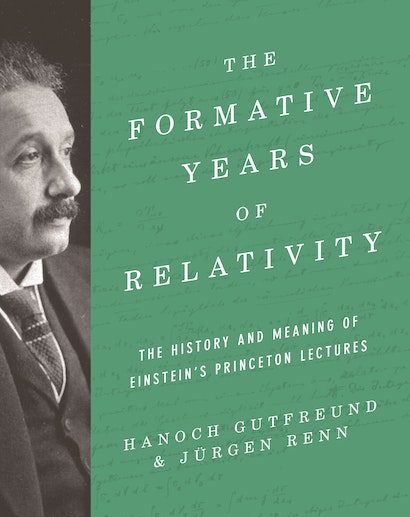 The Formative Years of Relativity
Available in 2 editions
Buy This 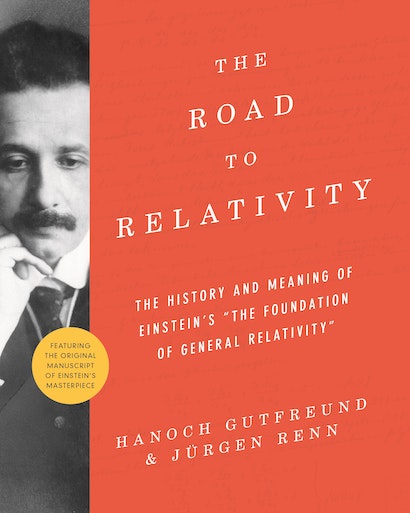 At the end of World War II, Albert Einstein was invited to write his intellectual autobiography for the Library of Living Philosophers. The resulting book was his uniquely personal Autobiographical Notes, a classic work in the history of science that explains the development of his ideas with unmatched warmth and clarity. Hanoch Gutfreund and Jürgen Renn introduce Einstein’s scientific reflections to today’s readers, tracing his intellectual formation from childhood to old age and offering a compelling portrait of the making of a philosopher-scientist. Recently they spoke to us, and to each other, about the project.

You have already co-authored three books on Einstein’s scientific legacy—what compelled you to write another one?

HG & JR: We wanted to feature one of Einstein’s most significant, but largely neglected texts: his unique autobiography. Each one of our previous three books featured a canonical text from the early days of Einstein’s theory of general relativity and his new gravitational physics. These texts are: The Foundation of General Relativity, the first comprehensive review of the new theory; Relativity – the Special and General Theory, an attempt to present the theory to the general public; The Meaning of Relativity, a definitive exposition of the special and general theories of relativity and an introduction to the formative years and consequences of general relativity. Around each one of these texts we built a narrative, placing them in the historical and scientific context of the evolution of Einstein’s ideas, tracing their roots in the contemporary research of Einstein and his interaction with peers—physicists, mathematicians, and philosophers.

This project would not have been complete had we not included in this series Einstein’s Autobiographical Notes, which was written at a later stage in his life and looks back at his efforts described in the other three texts. This text represents a key document of the twentieth century: it sheds light on the rise of the new physical worldview that resulted from the intellectual revolution initiated by Einstein. The Autobiographical Notes offer a unique, introspective view of how this revolution came about. Presenting this text in Einstein on Einstein, accompanied by commentary essays in a format similar to the previous three books, was an absolute must for us.

What lessons would you like your readers to learn from this book?

HG & JR: We think our book offers readers a very accessible synopsis of Einstein’s worldview, not just with regard to physics but also his outlook on the world at large, from philosophy to science and society.

Einstein is generally known and revered for his groundbreaking contributions to our understanding of the physical world and for the technological consequences of his theories, which affect our daily life. In the Autobiographical Notes, he almost completely ignores these achievements. Throughout the entire text it is clear that what counts for him, in the end, is how a man of his kind thinks, as well as the challenges and tensions he encountered along his quest for a scientific worldview and not the final formulation of successful breakthroughs. In his final remarks, Einstein defined the message he wished to convey to his readers: “This exposition has fulfilled its purpose if it shows the reader how the efforts of a life hang together and why they have led to expectations of a definite form.” His expectation, to which he was led by the efforts of his entire life, was to formulate an ultimate worldview based on the field concept of general relativity.

Our commentaries in Einstein on Einstein offer a new way of reading this text. Their main goal is to highlight the unique features of Einstein’s scientific odyssey and to show how the efforts in his effort amounted to nothing less than the creation of a comprehensive scientific worldview. This effort is characterized by a deep interest in philosophy, which was not detached from his actual work in physics. Indeed, his scientific breakthroughs are intimately connected with his epistemological reflections, in particular, with the nature and origin of fundamental concepts such as space, time, and causality.

Our take-away message to the reader is that to fully comprehend Einstein’s role in the history of modern physics, it is not enough to understand his theories and their consequences. A full understanding requires a picture that shows the results of Einstein’s scientific work and the methods that led to them to be on an equal footing. In Einstein on Einstein we attempt to draw such a picture.

What is the contribution of intellectual autobiographies to our understanding of history?

HG & JR: Intellectual autobiographies give us the inside view on history: how does it feel to be Einstein looking back at half a century of revolutionary contributions to science? The answer is surprising and very different from what we would expect: the ongoing quest is more important than the accomplishments. But, of course, autobiographies tend to give us a distorted view as they are highly subjective accounts. Einstein himself warns us in fact that “Every reminiscence is colored by today’s being what it is, and therefore by a deceptive point of view,” and several years earlier he even commented that “Autobiographies mostly arise from narcissism and negative feelings toward others.” Yet, without Einstein’s personal account, we could hardly appreciate the degree to which the great variety of his scientific endeavors, from relativity to quantum theory, were actually connected by a hidden thread. Even if that coherence may be partly due to a hindsight perspective, Einstein’s reminiscences reveal connections among his scientific contributions that we would not have seen otherwise. Bringing these connections, but also their roots in Einstein’s personal life, to the fore is one of the aims of our book.

HG: Jürgen, you have recently published The Evolution of Knowledge—a fundamentally new approach to the history of science and technology. How do you see the Einstein chapter in this history?

JR: The part of The Evolution of Knowledge dealing with Einstein’s formulation of relativity theory owes much to our joint work on Einstein, embodied in our four common books. Since my time as a co-editor of the Collected Papers of Albert Einstein, the history of relativity has always struck me as a prime example of the long-term character of the evolution of knowledge, extending as it does from challenging problems of classical physics in the 19th century to the detection of gravitational waves in this century. In The Evolution of Knowledge, this is one of many episodes of the history of science that I describe, placing it within the larger context of a history of knowledge. This history begins at the dawn of humanity and reaches to the challenges of the Anthropocene, the new geological epoch shaped by the planetary impact of humanity. But there is more Einstein in this book than first meets the eye: I have always been inspired by Einstein and Leopold Infeld’s classic work The Evolution of Physics, a popular history of physical concepts, and hence the title of my book. More importantly, Einstein’s sense of global responsibility and his commitment to science in the service of humanity have encouraged me to develop a perspective on the history of knowledge that critically examines the potential of science to address the grand challenges of humanity, from pandemics to the climate crisis. And finally, the tools and concepts of my analysis have their roots in Einstein’s epistemological stance, in particular, in his insights into the human-made nature of scientific concepts as he expounds them in his Autobiographical Notes. In this sense, The Evolution of Knowledge and our Einstein on Einstein are really twin publications.

JR: Hanoch, most of your life in science was devoted to research in physics. In recent years your interest is focused on Einstein scholarship. How do you view this transition in your academic career?

HG: As a Professor of Theoretical Physics at the Hebrew University of Jerusalem, I taught for decades everything that Einstein did (except for general relativity). When I stepped down from the presidency of that university, I decided to explore the contents of the unique cultural asset owned by the university—the Albert Einstein Archives. It is then that I read, for the first time, Einstein’s original papers from 1905. For me it was an eye-opener. These papers are formulated very differently from the way the corresponding physical issues are presented in the text books that I used in my teaching. Although these papers explain experimental phenomena that could not be explained in the context of classical physics, none of them was written in order to explain a specific phenomenon. They were all motivated by basic questions associated with Einstein’s quest for a comprehensive physical worldview, guided by his philosophical and epistemological thinking, as is so clearly demonstrated in the Autobiographical Notes and elaborated in our commentaries in Einstein on Einstein.

It then dawned on me that when we teach physics to students of physics, we are only interested in the results and ignore the struggles, debates, methods, and failures that led to these results. I believe that if I had known what I know today when I was teaching physics, my lectures would have been more thought-provoking and challenging to my students. It was with this understanding that I came to visit you in your institute in Berlin. Our discussions led to the four books that we have already co-authored, of which Einstein on Einstein may be considered a comprehensive summary of the ideas expressed in the previous three.

Looking back at these two phases in my academic life, I am pleased to see how they supplement and enrich each other.

Hanoch Gutfreund is professor emeritus of theoretical physics at the Hebrew University of Jerusalem, where he is also academic director of the Albert Einstein Archives. His books include, with Jürgen Renn, The Formative Years of Relativity: The History and Meaning of Einstein’s Princeton Lectures (Princeton). Jürgen Renn is a director at the Max Planck Institute for the History of Science in Berlin. His books include The Evolution of Knowledge: Rethinking Science for the Anthropocene (Princeton).