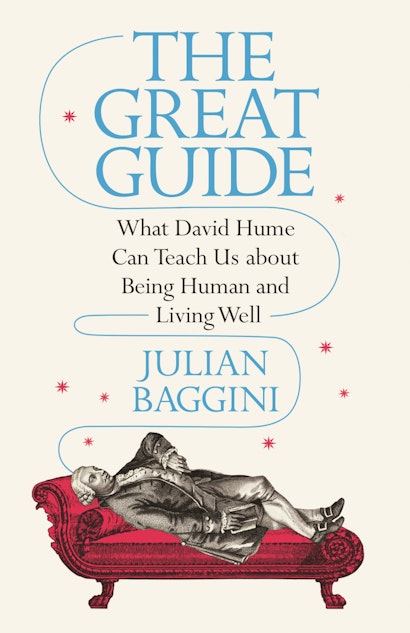 The Great Guide
Available in 3 editions
Buy This

It’s a great irony that many still believe Darwin’s theory of evolution was a sudden, startling revelation rather than itself being the fruit of the evolution of ideas. Darwin found some key missing pieces and put the jigsaw together, but many other pieces had been discovered years before.

Most of these piece-finders were nineteenth century scientists, such as Charles Lyell, William Herbert, William Charles Wells and, of course, Alfred Russel Wallace, who came up with his own theory of evolution through natural selection independently of Darwin. But one had a very different background. The eighteenth century Scottish enlightenment philosopher David Hume had ideas that dovetailed so perfectly with evolutionary theory that reading him now, it seems remarkable he had no idea of evolution at all.

This is most evident in Hume’s writings about what we now call evolutionary psychology, before there was even a theory of evolution. Without the specific insights of Darwin, Hume had a sense that certain principles of thought had developed over the course of human history in response to certain needs that emerged purely out of our biological and social situation.

For instance, in one striking passage he suggests that our ideals of beauty are linked to what we would now call, in evolutionary terms, fitness for survival. “’Tis certain, that a considerable part of the beauty of men, as well as of other animals, consists in such a conformation of members, as we find by experience to be attended with strength and agility, and to capacitate the creature for any action or exercise. Broad shoulders, a lank belly, firm joints, taper legs; all these are beautiful in our species, because they are signs of force and vigour, which being advantages we naturally sympathize with, they convey to the beholder a share of that satisfaction they produce in the possessor.”

Our natural history even explains the emergence of moral norms, another idea which has become popular in recent years. Perhaps the clearest example of this is his answer to the question of why sexual promiscuity has been condemned more in women than men. Hume offered a version of an argument that many evolutionary psychologists use today. It starts with the observation that “Men are induc’d to labour for the maintenance and education of their children, by the persuasion that they are really their own; and therefore ‘tis reasonable, and even necessary, to give them some security in this particular.” As Hume delicately explains, “if we examine the structure of the human body, we shall find, that this security is very difficult to be attain’d on our part.” The most efficient means that evolved to ensure this was for women themselves to internalise society’s condemnation of infidelity. “In order, therefore, to impose a due restraint on the female sex, we must attach a peculiar degree of shame to their infidelity, above what arises merely from its injustice, and must bestow proportionable praises on their chastity.”

Hume believed that the usefulness of norms of chastity for married women of childbearing age generates a general rule which “carries us beyond the original principle, and makes us extend the notions of modesty over the whole sex, from their earliest infancy to their extremest old-age and infirmity.”

Another respect in which Hume anticipated Darwin was in his denial of a sharp distinction between humans and other animals. Quite remarkably for his time, he claimed that “no truth appears to me more evident, than that beasts are endow’d with thought and reason as well as men.”

If it seems much less than obvious, that is probably because we are pretty sure that animals don’t construct logical arguments. This misses the point. By saying animals reason, Hume is not so much raising them to the level of the highest philosophy but lowering the level of most human reasoning. Animals are more intelligent than we tend to think because humans are not as intelligent as we would like to think.

For Hume, we have to remember that most of our “reasoning” is little more than making assumptions based on past experience without any logical inference at all. Animals do the same. “Animals, as well as men learn many things from experience, and infer, that the same events will always follow from the same causes.” Hume full accepts that animals “are not guided in these inferences by reasoning” but “Neither are children: Neither are the generality of mankind, in their ordinary actions and conclusions: Neither are philosophers themselves, who, in all the active parts of life, are, in the main, the same with the vulgar, and are governed by the same maxims.”

Although it is commonly believed that animals act on pure “instinct” whereas humans do not, for Hume even reason itself “is nothing but a wonderful and unintelligible instinct in our souls, which carries us along a certain train of ideas, and endows them with particular qualities, according to their particular situations and relations.”

Hume also attributes emotions to animals, saying “love and hatred are common to the whole sensitive creation.” Darwin himself wrote extensively on the same theme his The Expression of the Emotions in Man and Animals. As with humans, these are transmitted from animal to animal. “Fear, anger, courage and other affections are frequently communicated from one animal to another, without their knowledge of that cause, which produc’d the original passion.” Given that Hume believed such sympathy is the basis of morality in humankind, Hume suggested that this ability to sense the emotions of others gives animals some kind of primitive moral sense too.

Charles Darwin’s notebooks also show he read several of Hume’s works. We do not know whether they helped him to form his ideas. But even if they did not, he would have agreed with many of Hume’s observations and arguments. Darwin took many of Hume’s ideas further than the great Scot could have done, and vindicated them.

Julian Baggini is an independent scholar, philosopher, and writer. He was the founding editor of The Philosophers’ Magazine and is the author of many books, including How the World Thinks: A Global History of Philosophy and The Edge of Reason: A Rational Skeptic in an Irrational World. Website julianbaggini.com Twitter @JulianBaggini