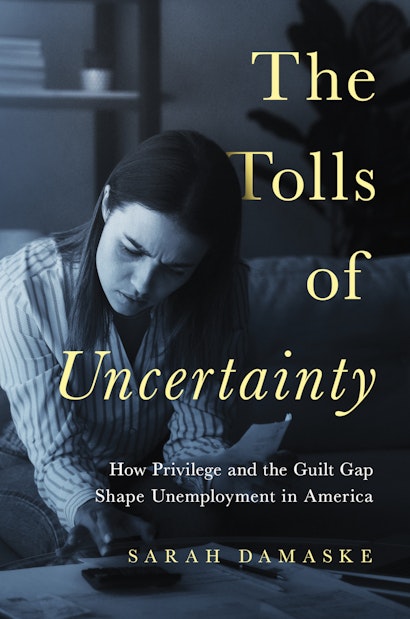 The Tolls of Uncertainty
Available in 2 editions
Buy This

Losing your job is difficult for anyone, but for working-class women without savings it is even harder. Sarah Damaske talked to women in low-wage jobs in Pennsylvania who struggled to afford to feed their families or pay for childcare so they could look for work.

This is a response to Aliya Rao’s LSE Festival film, Why is Unemployment Bad for Gender Equality?

I’ve spent the last ten years interviewing men and women doing a range of jobs and with varied educational backgrounds in the state of Pennsylvania. Unlike the people who’ve lost jobs during the pandemic, those I met were put out of work during a period of unprecedented economic growth. Yet despite the booming economy, I found job loss and unemployment was a fast track to great hardship and even impoverishment for a particular group: mothers in low-wage jobs. Women working low-wage jobs have also been some of the hardest hit by the current recession.

One white woman I met, Tracy, had a full-time job that paid slightly above the Pennsylvania minimum wage; her unemployment compensation was $154 a week, or $616 monthly. How far would that have stretched when we met? For the year 2013, the USDA estimated it would cost about $479 a month using a “thrifty” budget to buy healthy meals to feed a mom and two children the ages of Tracy’s kids. Had Tracy followed this recommendation, it would had left her with 137 dollars to pay her rent, her bills, and everything else. But Tracy had long stockpiled dried food and after her job loss, she raided her once well-stocked pantry. This helped Tracy keep her children fed, as did the SNAP benefits they received, but she was not eating as regularly as she used to. “When you don’t have [enough food] here,” she explained, “you try not to eat … what I have, I want my kids to have it.”

In my study, women working lower-wage jobs (both married and single) experienced painful economic jeopardy. Over half reported bills going unpaid, food being reduced, children’s necessities eliminated, savings (if they existed) depleted, and household supplies gone. Some went hungry, others lost their homes, still others experienced heat or electricity stoppages; a number reported that phone bills were the only bills regularly paid (phones were necessary to find a job). Women similarly experienced greater material hardship than men after the Great Recession, according to the Institute for Women’s Policy Research.

There are a few factors that help explain why lower-wage working women are so at risk when they lose a job. First, women continue to make less money than men do (even when employed in the same line of work). Since unemployment insurance in the United States is based on people’s incomes (calculated as about half of one’s earnings, depending on what state you live in) and women earn less than men, women bring home, on average, less money than men do after a job loss. Women’s lower wages also mean that they have fewer resources to set aside savings before their job loss, putting them closer to the edge when it comes.

The Biden administration is working on a new stimulus package. The money promised in the unemployment extensions supplements and the direct cheques to American families will likely be used to pay for outstanding expenses or to purchase larger items that the family needs, as Laura Tach and Kathryn Edin have found. It will also likely steady some families who are teetering on the edge of poverty.

This is good news, as my research suggests that being thrown into poverty diverts lower-wage women workers from their job search. Instead of seeking jobs, they spend their attention on dealing with the newfound challenges of life in poverty.

But another cheque won’t be enough to help low-wage women’s employment prospects. As Rao notes in her talk, during unemployment, women are also more likely than men to have more chores to do around the house as well as increased care-giving responsibilities. This is particularly true for lower-wage women workers. In a recent paper, I found women without college degrees had to take on more responsibilities at home after a job loss than did men or even women with college degrees (who often had the ability to afford childcare). This made it hardest for women without college degrees to search for work. Sometimes women had to take on these responsibilities because they were single moms, as was the case for Samantha, who lost her state childcare credit when she lost her job. She said, “I’m a stay-at-home mom now, again, because my day care [credit] was pulled. …I couldn’t afford day care with the cheque I was making from [unemployment]. So, now I’m just home with the kids again.” Although Samantha called herself a stay-at-home mom, she was not partnered, so she knew she would need a job once her unemployment ran out. In the meantime, with two young children and no childcare, she could not search for work.

The current stimulus proposal includes plans to reopen schools and to support families with children via a tax credit. Future proposals that incorporate women’s care-giving responsibilities, particularly free childcare and school days that align with paid work, must continue to be central to recovery plans if we hope to help women return to paid employment.

Without solutions that tackle both their economic vulnerability and their care-giving responsibilities, lower-wage women workers will be left behind yet again.

This essay was originally posted on the LSE COVID-19 blog.

Sarah Damaske is an Associate Professor of sociology and labor and employment relations at Penn State. Her book The Tolls of Uncertainty: Losing a Job in the 21st Century will be published by Princeton University Press on May 4, 2021. She is the author of For the Family: How Class and Gender Shape Women’s Work and co-author of The Science and Art of Qualitative Interviewing (Oxford). Twitter @sarahdamaske