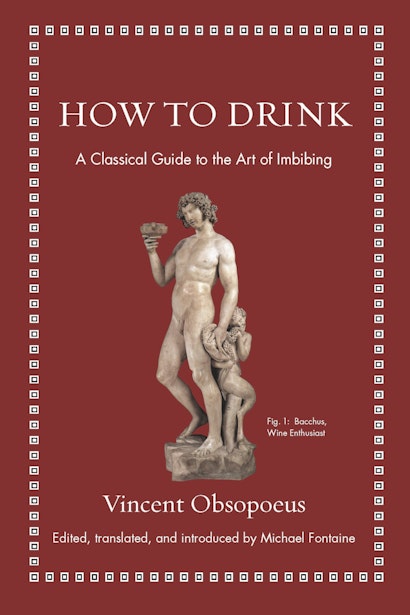 How to Drink
Available in 2 editions
Buy This

Is there an art to drinking alcohol? Can drinking ever be a virtue? The Renaissance humanist and neoclassical poet Vincent Obsopoeus (ca. 1498–1539) thought so. In this excerpt from How to Drink: A Classical Guide to the Art of Imbibing, translated and edited by Michael Fontaine, Obsopoeus muses about the benefits of drinking in a place where we’re all spending ever more time—home.

At home, you can say or do anything; you’re the king in your house. Nobody you could offend is drinking with you. Your wife’s the only one enjoying alcohol’s sweetness with you, and she’s long been used to how you are. She already knows your life, knows how to deal with you; she has the patience of a pro for your sermonizing. And if you’re nice to her, you’ll strengthen your wife’s devotion and love: give her wine, drink with her, and you’ll get greater pleasure from a single drink than from going out and draining dry whole bottles of wine. What’s more, the woman you love won’t feel like her husband disrespects her; no, she’ll feel like the center of your universe, and she won’t think you’re out living it up on your own while she’s left sitting at home by herself, wishing she could have a drink, too. You can express total happiness, laugh without embarrassment, and say anything and everything that comes to mind.

By drinking at home like this, you’ll avoid a bunch of irritations you have to put up with when you go out drinking:

And that’s not to mention the mouthing off—no glory there!—and embarrassing brawls that are always breaking out over some stupid little thing.

Seriously, how often have you regretted abandoning your house and going out drinking with someone else, or having to put up with people arguing and fighting and other ordeals that are unworthy of a gentleman? A peaceful house prevents all that and worse, whereas the barrage is nonstop when you’re out drinking. No malicious ears will be breathlessly hunting your words to tattle to the world, which is what happens all the time in public life when a word accidentally pops out of someone’s mouth: it’s been betrayed by its throat, and it will—make no mistake—boomerang back to slit it.

Already in this short poem, my Muse has covered the opportunities your home affords for drinking wine safely and enjoyably. Really, though, who could count all a home’s advantages? Peaceful love and restful sleep rule there; there thrive harmony, the relaxed life, and trust, which is the sacred glue that holds a marriage together.

There will never be a better or safer retreat than your home: it’s a haven rarely troubled by swelling storms.

About the Editor and Translator