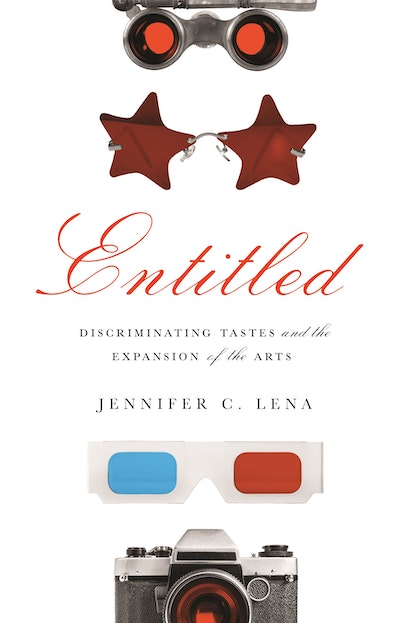 Entitled
Available in 3 editions
Buy This

JL: For the first decade of my career, I studied the sociological features of rap and hip-hop music. I came to understand that, as a white woman in an Ivy League Ph.D. program, I was given more encouragement to pursue the topic than my non-white peers. I hoped that my work would help make the subject matter more appealing and legitimate to (and for!) other scholars, and allow more voices to enter the conversation.

Once you read Entitled, you’ll be able to argue that I was an aesthetic entrepreneur: a privileged person working to convince people to treat a native form of entertainment as art. The book is about what it takes for efforts like mine to succeed, and why that success benefits me more than the artists I care about.

One of the key concepts in your book is about the “openness” of the arts. What does that mean, and how has it changed over time?

JL: Most of us think of the fine arts as a pretty “closed” world. Major museums and symphony orchestras are expensive to enter, and we can’t touch anything or make noise. Even when we know that the point of these places is to provide a respite from everyday life, they can feel exclusive and elitist.

Wealthy and powerful Americans did build and run these organizations, and they wanted them to look and feel like “cathedrals” of culture. But they’re also public places, in the sense of being open to the public (for an admission fee). They’re also civic places, in the sense that many programs and exhibitions are designed to educate the public, host debate, and stimulate community cohesion; they also receive donations from the public and support from our tax dollars.

And—here is where my argument may be most surprising—they’re also more open to more kinds of artists than ever before. You can visit any major metropolitan art museum and expect to see painting and sculpture but also motorcycles, fashion, photography, design objects, and—in one striking example—a recreation of the dirty CBGB club bathroom. You can go the symphony and hear popular music, even film scores.

In Entitled I devote a lot of attention to this last type of openness, and try to understand why it happened, what was excluded, and what it means for public life.

In short, while the invention of “high art” in America depended on the work and tastes of elites, the story of the arts in America is incomplete if it is a tale of the noblesse oblige of the wealthy; it is better characterized by the tension between elitism and populism.

Once we treat something as ‘art’ instead of viewing it just as “useful” or entertaining, it becomes more valuable. Why do you argue that this process benefits aesthetic entrepreneurs more than the artists?

JL: Many people with wealth and power today adopt a kind of “cosmopolitan” approach, supporting a huge variety of kinds of art and culture with their patronage. They depart from their ancestors who stuck pretty close to the “highbrow” tastes of their parents and grandparents.

But in offering their support to artisans in Ghana, weavers in Burma, or French graffiti artists, contemporary elites often end up reproducing stereotypes of these creators and their home places. That is, sometimes when you celebrate “difference” or novelty, you just end up reinforcing the fact that something is atypical.

I try to understand how their engagement with “diversity” through cultural consumption is viewed as political and ethical action, and I argue that they benefit from this a lot more than the artists, in part because so little profit (financial or reputational) trickles back to the artist and her collaborators. Much of their work ends up in other countries, and away from its contexts of production. To achieve diversity, we’re always also practicing exclusion.

Can you give us an idea of how that tension between elitism and populism plays out?

JL: They’re usually very visible, as two or more groups within a creative community battle over specific objects, sometimes using the terms “cultural appropriation.” In the book, I write about one such battle over the use of a kimono in an exhibit at the Boston Museum of Fine Arts, in 2015. The following year, the Whitney Biennial exhibition was marked by protests over Dana Schutz’s 2016 painting of Emmett Till (“Open Casket”). These two battles were fought over who the right to display culture.

But these tensions are also evident in how we choose what culture to consume. In fact, in order to guide “elite” viewers toward the “correct” programs, we’ve invented the category of “prestige television.” A 2017 Vulture essay on “prestige television” begins: “Do you need help recognizing whether the show you’re watching is good, serious TV? What if you thought the thing you’d fallen in love with was high-quality entertainment, but actually it’s just cheap trash?” This nicely frames the problem: mediums no longer allow us to easily distinguish “good” and “trashy” culture; instead, we need to rely on indicators of “elite quality” within “populist media.” The aforementioned essay recommends, I think correctly, that people detect “prestige television” by the presence of discursive cues: comparisons to other art forms (novels, cinema), descriptions that are particular to art (“chapters,” not episodes; a “pilot” season), and the use of sophisticated interpretative lenses (“winking self-awareness”).

And so we increasingly discover that the tension between elitism and populism plays out within audiences, as some viewers are amused by the “winking self-awareness” of the script writers, directors, and actors, while others mis-recognize this content, or ignore it completely. During the recent Emmy Awards, we could see this tension played out on stage, as prestige shows captured the “serious” awards (within the drama categories), while comedy and unnominated shows boasted more total viewers.