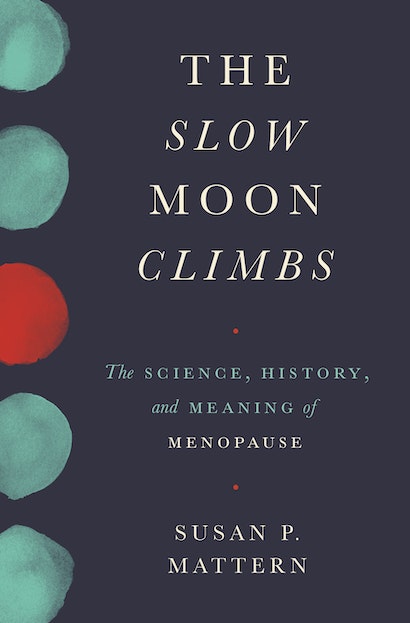 The Slow Moon Climbs
Available in 4 editions
Buy This

Books about menopause seem to be primarily written as memoirs. What compelled you to write a cultural—and evolutionary—history of menopause?

SM: There are a lot of memoirs about menopause out there, and I guess I just don’t find them very interesting. To write a memoir about menopause that fits in the genre, I would have had to talk about symptoms, medical problems, emotional and psychological distress, anxiety about aging and sexuality, and so on. But my questions were about why we think of menopause that way—as a women’s medical problem and a collection of symptoms. Why do we have menopause in the first place? What role has it played in our history as a species? These are complex questions to which many very smart people have dedicated a lot of research that isn’t widely known or available to the general public.

When did you first learn about Ho’elun, and why did her story speak to you?

SM: I teach World History to undergraduates, and The Secret History of the Mongols is one of my favorite primary sources to read with them. We don’t have many sources in which nomads describe themselves, their history, their identity and ideology; normally we hear about nomads from the more literate agricultural societies that they clashed with. The Secret History is an exception. One of its striking features is the prominence of women in the story it tells about Mongol origins. Mothers and wives are key actors in this story, and of these characters Ho’elun is the best-developed.

You’re a historian, but this book takes a great deal of evolutionary biology and scientific data into account. What made this cross-disciplinary approach appealing?

SM: My profession is moving away from the idea that history is just about documents. There are so many more ways to find out about our past. The biological sciences are surprising us almost every week with new evidence about migrations, displacements, diseases, diet, food sources, and so on.

Who should be paying attention to the idea that menopause frees up women to contribute to the evolutionary success of the human race?

SM: Everyone. Women, men, young people, old people. Our society has limited itself with a number of—as I see it—fundamentally wrong assumptions about human nature that restrict our sense of what we can do. We don’t value midlife and old age despite that it is precisely these stages of life that distinguish us from other apes. Our longer lifespan, together with an extraordinary level of cooperation in things like child care and food-sharing, have allowed us to invest in long childhoods, the development of skills and technology, and big brains, while also having the ability to reproduce quickly in favorable circumstances. For an animal like us, dependent as we are on skill and experience, midlife is the most productive time of life. The surplus energy that women in this stage are able to transfer to descendants and non-relatives is a big part of what makes us different from other animals—distinctly human—and what makes us so adaptable to different circumstances and environments. I don’t think it’s an exaggeration to say that that surplus allows us to have civilization. If we internalized that view, it would change a lot of our policies about medicine, childcare, aging, and related subjects.

Do you foresee a change in the way we talk about menopause? Will society stop thinking of it as a medical condition to be addressed? How would that happen?

SM: I would love to believe that everyone will read my book, stop going on and on about how menopause is a medical problem of symptoms and risk factors, acknowledge the origins of this view in certain trends in eighteenth-century medical discourse, and start seeing if for what, as I argue, it really is. I’m saying that menopause is a transition to a natural, evolved stage of life that has been critical to the success of our species in the past and remains critical to our future, and it ought to be valued and respected. It’s a solution, not a problem. Whether that happens depends on how many people read the book. And of course, we have whole industries that depend on a medical view of menopause and aren’t going to want to change.

What does this new view of menopause teach us about the role of older people in our society?

SM: It is impossible to stress strongly enough that old people are what differentiate us from other apes. Without longer lives than chimpanzees, we could not have evolved the bigger brains that we are so proud of—those things go together. We could not invest in the technologies that have helped us adapt to all ecological niches and that have created the energy surpluses that allow for civilization and more technology. Adaptations of the evolutionary theory of senescence that explain longevity and menopause stress the importance of transfers of resources—humans tend to transfer resources downward through the generations, and that’s one of the foundations of who we are. Older generations give to younger ones. But we have this negative view of aging, like it’s something bad. Our longevity is part of a suite of traits, including big brains, cooperation, and menopause, that make us distinctly human.