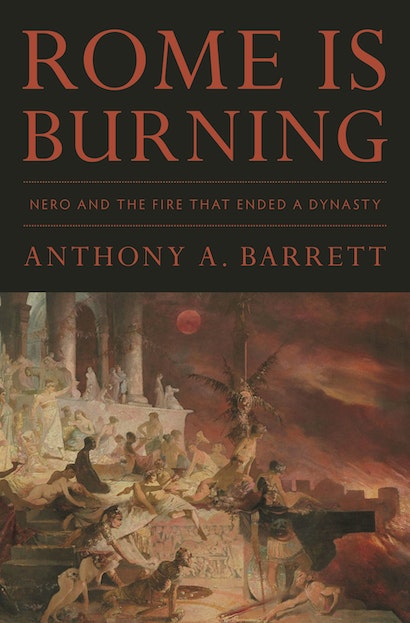 Rome Is Burning
Available in 4 editions
Buy This

There is one political failing that people seem unable to forgive. In the case of George W. Bush it was not the bitterly divisive invasion of Iraq that blighted his presidential image, nor was Donald Trump’s belligerent governing style his most serious liability in the 2020 election. Critics of both were fixated on something seemingly far less contentious: an alleged failure to provide effective leadership in troubled times, Bush after Hurricane Katrina, Trump during the coronavirus pandemic. But first prize for archetypal failed leader must surely go to Nero, for his response to the fire that devastated Rome in July, AD 64. After all, his reputedly lax handling of that crisis has given the English language possibly its most familiar expression derived from antiquity, “fiddling while Rome burns,” a byword for the neglect of pressing problems in favour of trivial or personal preoccupations.

So, in the case of Nero, it would seem deserved. But does he in fact deserve the scorn that has stuck to him so stubbornly for nearly two millennia? If we look carefully, and objectively at the evidence, there are good reasons for skepticism. When the fire first broke out, he was relaxing at the imperial villa in Antium (Anzio), some forty miles south of Rome. Admittedly, he did not immediately rush back, but that was not unreasonable—urban fires were a fairly common occurrence in those days. Once it became apparent that the fire was serious, he did return, and not just to inspire by his presence: far from merely “fiddling” he actually assumed a hands-on role in fighting the flames, placing himself in danger as he rushed from building to burning building. It was to no avail, but he did at least make the effort. In reality, once a fire had taken a firm hold in ancient Rome, the options were very limited. The standard tactic of the emergency services (the Vigiles or “watchmen”) was to try to create firebreaks by levelling buildings in its path, usually by setting small controlled fires. This was attempted during the Great Fire, and in at least one sector efficiently enough to bring it temporarily to a halt. But in the end, the wildly erratic course of the fierce winds made the route of the flames all but predictable.

There was little that even the most energetic leader could have done before the fire had abated, nine days after it started, and where we might more usefully seek to assess leadership is in the emergency measures adopted to help the victims, and in subsequent programs. Here, again, Nero gets high marks. He set up temporary shelters on the Campus Martius for those rendered homeless. When these became over-crowded, he opened up other locations, including major public buildings and even his own personal estates. He initiated schemes to encourage reconstruction though government-investor partnerships. Grants for rebuilding were provided; former slaves who had acquired partial citizenship could gain full status by investing half their accumulated assets in home-construction. He undertook to remove the debris and recover the bodies at his own expense. Similar diligence was shown in new measures to combat a recurrence. In post-fire Rome, new streets were properly surveyed, with wide roads and reserved open spaces. Height restrictions were imposed on apartment blocks (notorious fire-traps). Party walls were prohibited and perimeter space was mandated. There were new rules on the avoidance of wood in construction: buildings were to incorporate stone, and even the types of permitted fire-proofing stone were specified. Guards were posted to prevent illegal siphoning from the water supply, and firefighting appliances were to be kept in public view. In an operation that suggests excellent planning and management, when ships were able once again to bring up grain from the port of Ostia, they carried back fire debris, which was then used to fill the Ostian Marshes.

So how did Nero become the quintessential fiddler during his city’s calamity? It is not complicated. He had the bad luck to fall victim to something as prevalent in antiquity as it is today—“false news.” He was reputedly seen overlooking the conflagration from a high tower and reciting his poetry. The Roman historian Tacitus, although bitterly hostile to the emperor, concedes that this was only a rumor, but rumor is far more appetizing than truth when false news tops the menu. The regime that eventually succeeded Nero, the Flavians (Vespasian and his two sons), was anxious to foster bogus stories about their predecessor, the more outrageous the better—so long as they were negative. Nero’s personal fire-fighting activities were depicted as a selfish attempt to save his own palaces, the laying down of firebreaks by the fire services as acts of arson committed by his agents. His welfare measures were dismissed as crass stunts to win popularity, and his debris removal initiative as a scam to get access to loot. The commendable provision of safe, wide, streets was also criticized. Why? Because they provided less shade! His later plan to beautify the devastated center of Rome with a visionary project involving stunning buildings and a large artificial lake, situated in idyllic semi-rural surroundings with generous access for the public, the famous “Golden House,” was disparaged as a symptom of tyrannical megalomania. Even an absurd notion that he had personally started the fire was encouraged.

There is little doubt that Nero was, generally speaking, a deplorable ruler, a pampered playboy prone to arbitrary cruelty and gross misjudgment. We should make no mistake about that. But during and after the Great Fire he performed admirably: perhaps he was simply bored by the duties of routine government but could rise to the challenge and excitement of a crisis. In the end, his efforts did his reputation little good, and we should learn from this. Whether reading ancient texts or watching TV news, we need to be constantly on our guard. When it comes to the scrutiny of our leaders, the truth rarely resides on the surface.