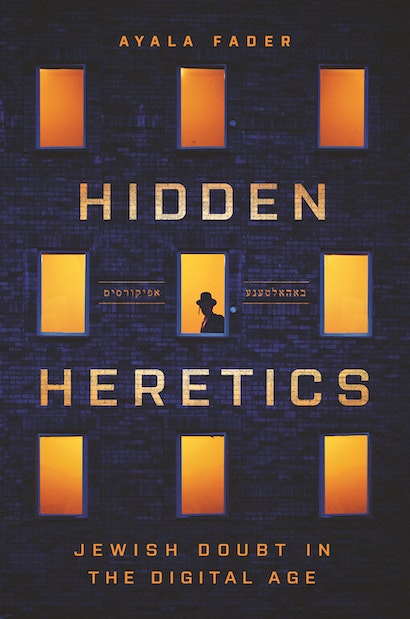 Yisroel was an earnestly pious boy growing up Hasidic in Brooklyn, New York. With his side curls grazing his shoulders, thick plastic glasses, and big black velvet yarmulke, he looked like all the other boys in his yeshiva, where he studied the Torah and its commentaries from early in the morning until late at night. But when he was thirteen, Yisroel began to notice contradictions that troubled him in the religious texts he was studying. He didn’t initially doubt the truth of ultra-Orthodox Judaism, but he had problematic questions—what are called in Yiddish emuna kashes (questions about faith). Only once did he timidly confide in his teacher, a rabbi, who angrily warned him that such questions came from the sin of masturbation. From then on, confused and ashamed, he kept his questions to himself and tried, as he told me, to “push them under the rug.” At eighteen he got married, and he and his wife, Rukhy, whom he barely knew but grew to adore, had five children in quick succession. To support his growing family, Yisroel eventually stopped studying Torah and began, as many Hasidic men do, to work in information technology.

However, in 2003, when he was twenty-nine, his questions began to nag at him again. And this time, thanks to his work with computers, he turned to the internet, secretly searching for and reading forbidden scholarly articles on theology, biblical criticism, and science. He hoped to finally find answers to his questions about faith in these non-Jewish sources, but they only provoked more questions. He decided then, he told me, that he had to “take his questioning all the way.”

Late at night, sitting alone in the kitchen after everyone had gone to bed and the only sound was the humming of the two dishwashers (one for meat and one for dairy), he began reading some of the then-popular heretical ultra-Orthodox blogs, like Hasidic Rebel and Shtreimel. These led him to online forums of the day, where writing under a pseudonym in Yiddish and in English, Yisroel debated with ultra-Orthodox Jewish doubters and even some who had openly left Jewish Orthodoxy altogether to go “OTD,” or “off the derekh” (path). He tried to convince them (and himself) that they were wrong. All of his searching, he told me, remembering his anguish, “tortured” him, but he could not stop.

Eventually, his questions gave way to doubt in the central premise of ultra-Orthodox Jewish authority: that God revealed the Torah to the Jews at Mount Sinai through Moses. Yisroel was in such agony at this heresy (kfira) that he secretly began to make phone calls to consult rabbis outside of his community who specialized in answering questions of faith. Their arguments failed to convince him. Despite continuing to observe the mitsves, the 613 prohibitions and commandments that had always directed every aspect of his life, he began to doubt their divine truth.

The first time he ever violated one of the commandments was on a Sabbath evening in 2012. His youngest was crying, and he knew that turning on the musical mobile above her crib would calm her down. Observant Jews do not turn electricity on or off during the Sabbath. He stood alone in the dark with his hand on the switch for a long time—yes, no, yes, no, yes, no? And then he switched it on. Each time he broke another commandment, like using his phone on the Sabbath, or skipping daily prayers, or even eventually sneaking nonkosher cold cuts into the pocket of his jacket to nibble on at home, he told me, he felt a sense of “freedom,” finally “in control of his life.”

That was when he became one of a growing number of what most ultra-Orthodox call in English “double life” or “ITC” (in the closet), or what Yiddish-speaking ultra-Orthodox call bahaltena apikorsim (hidden heretics), those who feature in this book: men and women who practiced religiously in public, including at home, but who often violated the commandments in secret because they no longer believed them to be God’s words to his chosen people. Yisroel and others like him kept their double lives secret to protect their families and for fear of being cast out in a world they were ill-prepared to navigate.

In 2014, after Yisroel had developed a growing network of double-life friends on social media and in person, his wife, Rukhy, finally confronted him. She had noticed that in the intimacy of their bedroom, he had stopped “washing negl vasser,” the ritual handwashing upon waking each morning. She asked him if he still prayed. If he kept the Sabbath. Did he still believe? Hiding in their bedroom closet and whispering late at night, so their children would not hear, he told her everything. She was devastated and told me she cried for three days straight. Then, just a few months later, the vaad ha­tsnius (the Committee on Modesty), a group of self-appointed activists and rabbis, contacted Yisroel through his brother-in-law. They somehow knew that he had just bought a book on science from Amazon for his twelve-year old daughter, which included a section on the theory of evolution, which Hasidic Jews reject.

Yisroel’s world was literally falling apart, and that was when I met him. A mutual contact, Zalman, who had been forced to leave his own ultra-Orthodox community a few years earlier for heresy, introduced us, knowing I was conducting anthropological research with those living double lives and those who tried to help them. Over the next year, Yisroel and I met periodically in a wooden booth in the back of a dark bar on Manhattan’s Upper West Side, amid the safe anonymity of Columbia University students. He still had his long side curls along with a long beard, thick glasses, and a big black velvet yarmulke. However, as a small personal rebellion, he had taken off the high black velvet hat most Hasidic men wear, and instead of the usual Hasidic men’s long black jacket, he always wore a cardigan or a parka.

Yisroel told me his story as it was unfolding. Although he was always anxious about protecting the anonymity of his family, he seemed to need to talk, often asking me about his legal rights, something I knew little about. When we couldn’t meet, we communicated on Whats­App, the secure phone messaging app that so many ultra-Orthodox Jews used. He told me how he and his wife were trying to figure out how to make their life together work again. He had promised her that he would keep practicing in front of the children. He hoped it was enough.

With her permission, he gave me Rukhy’s number, and I began to talk with her, too, on the phone and on Facebook. Rukhy, who used to rely on her husband for spiritual guidance, told me how his doubt had begun to affect her: how she worried about her own faith glitshing (slipping); how she had begun to reach out to other women in similar situations online; and about her new sense of responsibility for the rukhnius (spirituality) in their home, traditionally the authority of the husband. Yisroel’s secret was hers now too. She could tell no one, not even her mother or her sisters who lived across the street. She told me she was scared, angry, and heartbroken all at once.

The Committee on Modesty wanted Yisroel to sign a contract promising he would stop using any social media, part of the growing effort by the ultra-Orthodox to control the internet and protect the community from what was increasingly called the “crisis of emuna,” or the crisis of faith. This made Yisroel angry, and he brought up his constitutional right to privacy, having only recently learned about the existence of the Constitution at all. He was not rebellious, he insisted. He was simply following his conscience. Then the committee threatened to expel his children from school and to tell Yisroel’s parents unless he and Rukhy agreed to see a religious therapist, someone who worked with a rabbi and then reported back to the committee. Many ultra-Orthodox Jews believe that religious doubt might be symptomatic of an underlying mental illness, perhaps depression, a trauma, or anxiety, something that could be treated and cured. Afraid, Yisroel and Rukhy tried a number of different therapists, religious and secular, but none helped Yisroel regain his faith.

What Yisroel called his “journey” was still unfolding. Would he and his wife stay together, and if they did, would her faith continue to slip? Would the religious authorities and institutions be able to control the decisions Yisroel and his wife made? Would they expel his children, which would have serious repercussions for the entire family’s life, especially when it came time for matchmaking? Where did his responsibilities as a parent lie, especially as his children got older? Was there anyone, a therapist or a rabbi, who could help Yisroel regain his faith, something he still wished for?

Yisroel’s story was but one of many, the uncharted territory of ultra-Orthodox hidden heretics living double lives where belief and practice were at odds; these were men and (fewer) women, who no longer believed in the literal truth of divine revelation at Mount Sinai. Nevertheless, they felt bound by love and a sense of moral responsibility to stay with their still-religious spouses and children. Keeping secrets from those they were closest to, double lifers upheld the public appearance of adhering to ultra-Orthodoxy, even as they explored forbidden worlds, online and in person, beyond their own.

This essay is an excerpt from Hidden Heretics: Jewish Doubt in the Digital Age by Ayala Fader.