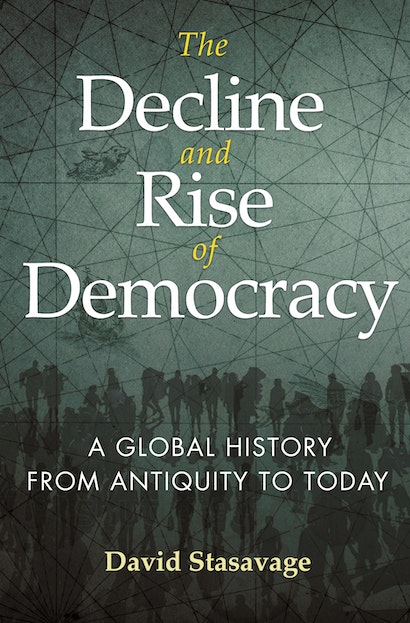 When we think about the history of democracy we need to first recognize one thing; the Greeks gave us the word demokratia, but they did not invent the practice. Across several millennia, a great many human societies have had collective forms of governance that gave people a voice. They did this by having councils and assemblies that placed constraints on rulers. They did it also by choosing leaders via consensus. These practices existed in the Americas before European conquest, in Ancient Mesopotamia, in precolonial Africa, and elsewhere. Early democracy was not the only form of government at this time—the alternative was autocracy—but it was so prevalent across regions that we can say that it came naturally to humans. Early democracy was particularly likely to exist in localized settings; larger polities more often tended toward autocracy. If we trace the long history from these early democracies forward, we are in a better position to understand the tensions in our own democracy today and to ask where we may be headed.

Early democracy existed as a substitute way of governing in the absence of a state bureaucracy. If we recognize this point, then we can better understand why modern democracy eventually emerged in Europe and not in China or the Middle East. Well into the second millennium of the common era, China remained ahead of European polities in terms of state development. Its rulers benefitted from an extensive state bureaucracy, and they also disposed of technologies that allowed them to use bureaucrats to map the soil and assess taxes. A similar pattern prevailed in the Middle East after the Arab conquests as a society that had previously practiced early democracy inherited a strong state bureaucracy from the Sasanian Empire. All of these developments paved the way for autocracy.

In Medieval Europe the near absence of state bureaucracies and technological backwardness combined to produce the exact opposite outcome; rulers needed to rely on their people to help them govern, and so they were forced to work with assemblies, councils, and other consultative bodies. Often it was these bodies themselves that collected the taxes, something which gave them great leverage. The irony is that it was Europe’s backwardness that would pave the way for the slow emergence of modern democracy. If early democracy had been above all a local phenomenon, as medieval European rulers began to jointly with members of their societies they succeeded in scaling up the practice of collective governance to a much larger setting

While England pioneered in developing many of the institutions that we associate with democracy today, it was in North America that the first modern democracy would take shape. Consider the historical background. Seventeenth century conditions in the British colonies in North America were much like those that had produced early democracy elsewhere; there was no state—apart from the one way back in England—to exercise coercive force, and land was abundant. These were exactly the same conditions that had previously helped lead to early democracy among the Native Americans of the Eastern Woodlands before European conquest. What the Founders did with the Constitution of 1787 was shift the United States towards modern democracy by creating for the possibility of a strong central state. We are still learning whether this experiment can work.

If early democracy involved citizens governing in the absence of a state bureaucracy—and with a deep form of political participation—modern democracy is a very different affair. For most people participation is limited to casting a ballot every few years, and governance in the interim is carried out by representatives and a state bureaucracy often located in far-away places. If for several millennia democracy was above all a local phenomenon, one potential risk in modern democracy is that citizens will grow distrustful of a distant central state.

The Constitution of 1787 did not on its own solve the problem of distrust in central government. Successfully practicing democracy at scale required additional efforts. If the danger of a large republic was that citizens would lack information and feel disconnected from the federal government, then investments needed to made to overcome this problem of scale. Soon after the Constitution’s ratification, James Madison wrote of the importance of subsidizing newspaper delivery to out of the way places so that citizens could be informed. This took place with the Postal Service Act of 1792. People in the Early Republic also wrote that democracy in an extensive republic could only function effectively if citizens were educated, and so many states established plans to subsidize common schools.

The lessons from the Early Republic, and from the long history of democracy, are clear; there are times when preserving an extensive republic requires investments to better connect people with a distant state. In the United States toda—in our era of polarization and distrust—we are at another such moment. This is one way in which a look at the long history of democracy can help us know what to do in our current age of democratic anxiety.

David Stasavage is dean for the social sciences and Julius Silver Professor of Politics at New York University. His books include Taxing the Rich and States of Credit (both Princeton). Twitter @stasavage