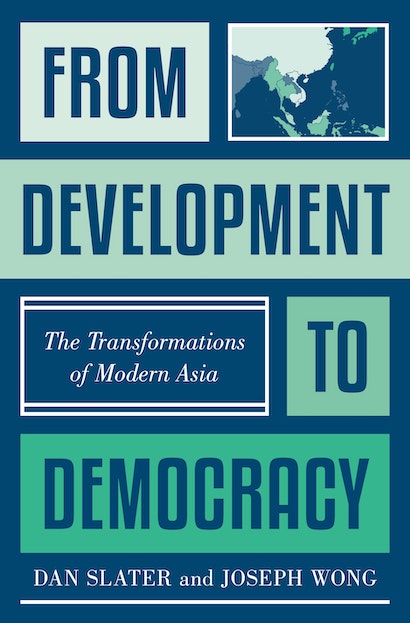 From Development to Democracy
Available in 2 editions
Buy This

Democracy is not just Western; it is Eastern as well. In a time when democracies globally—including the United States—are endangered, three Asian democracies stand out for their quality and stability: Japan, South Korea, and Taiwan. How did this “Eastern democracy” come to be? And could China ever follow a similar path?

In reality, all three democracies emerged from a common internal logic—a logic that could eventually apply to China and its ruling party, the Chinese Communist Party (CCP). Ruling elites in Japan, South Korea, and Taiwan didn’t abandon authoritarianism and acclimate to democracy because they were toppled by opponents or were required to by the Americans. They did so because they decided that they could continue to thrive even after democratization. And history has abundantly proven them correct.

Could democracy also arise in China simply because the CCP sees it as a way to rejuvenate and extend its legitimacy? The possibility is not as fanciful as one might suppose, and it has clear historical parallels in China’s immediate neighbors. Consider this scenario: If the CCP were to hold free and fair elections in the very near future—that is, to start the process of democratizing China—would there be any chance the incumbent party would lose those elections? After all, the CCP is a governing party that orchestrated one of history’s most remarkable economic transformations, elevating what was a hermit country closed off from the world into a global superpower. Today’s CCP does not only take credit for having united what was once a fractured China during the first half of the twentieth century, but it also claims to have maintained a unified China through multiple political and economic transformations since. Most importantly, the Chinese Communist Party is stronger and more popular today than it has ever been. Would the CCP lose if it were to lead China’s democratization? Conceding democracy is not the same as conceding defeat, so it is unlikely.

During the late 1980s, when the Kuomintang (KMT) in Taiwan lifted martial law and gradually introduced free and fair elections, the incumbent regime was not on the verge of collapse. The opposition, increasingly vocal, remained electorally weak. The KMT, much like China’s CCP today, governed Taiwan’s booming economy at the time, which meant that Taiwan’s democratic transition proceeded during “good times.” In almost every regard, Taiwan’s democratic transition—what we see to be the exemplary case of “democracy through strength”—was the opposite of what was happening in the Philippines, a story of “democracy through weakness.” Whereas the disgraced and illegitimate strongman Ferdinand Marcos left behind an unstable and ultimately flawed democracy in the wake of the Philippines People Power revolution, the KMT rode its popularity to victory in Taiwan’s founding democratic legislative and presidential elections.

It is not just possible for an autocratic regime to democratize through strength; it is sometimes in the regime’s best interest to do so if it seeks to stay in power. Paradoxically, it is precisely strong regimes that have the political strength to maintain their authoritarian grip and democratize with the confidence that they will still legitimately win political power. This counterintuitive argument challenges the conventional view that democracies are most likely to emerge from the ashes of weak and even collapsed autocratic regimes. While the path of democracy through strength is not ubiquitous in East Asia, it is not uncommon (let alone impossible). Because of this, understanding why and how regimes choose this trajectory is imperative. It’s a paradox worth explaining.

Developmental states in northeast Asia, for instance, successfully transitioned to democracy from a position of party and state strength. Some regimes attempt to democratize through strength but soon confront intractable sources of weakness, leaving them vulnerable to democratic reversals. Other developmental regimes miss their opportunity altogether, waiting too long and become what we call “embittered autocrats,” hanging on to their dwindling base of power with little hopes of regaining the strength needed to navigate a democratic transition. Other regimes simply resist democracy for historical and ideological reasons. These cases are instructive, not only for uncovering democratic possibilities in what was once thought to be infertile ground, but also for revealing the brutal lessons learned when regimes fail or refuse to democratize through strength, eventually finding themselves barely grasping onto power, if not befallen and disgraced, and leaving their country politically and economically unstable.

Going back to the case of contemporary China, the theory of democracy through strength implies that the current CCP regime is in the best position right now to concede democracy, if what it seeks is to continue ruling China as a legitimate governing party. Often, Chinese leaders will point to the collapse of the Soviet Union as proof that democratizing too soon can lead to a ruling party’s—and the country’s—demise. That would be the wrong lesson to learn, as the former Soviet Union did not democratize too soon, but rather the Communist Party there succumbed to democratic pressures too late, when it was already a spent and weakened regime.

History teaches us that, when it comes to politics, nothing is forever, even the most formidable of regimes. It makes good sense for such regimes to democratize before they pass their inevitable “best before” date. Simply put, waiting too long may prove calamitous for the CCP, as it did for other autocratic regimes that surrendered power when they became weak rather than concede democracy while strong.

Dan Slater is the Weiser Professor of Emerging Democracies in the Department of Political Science and director of the Weiser Center for Emerging Democracies at the University of Michigan. His books include Ordering Power: Contentious Politics and Authoritarian Leviathans in Southeast Asia. Joseph Wong is the Roz and Ralph Halbert Professor of Innovation at the Munk School of Global Affairs and Public Policy and professor of political science at the University of Toronto. His books include Healthy Democracies: Welfare Politics in Taiwan and South Korea.