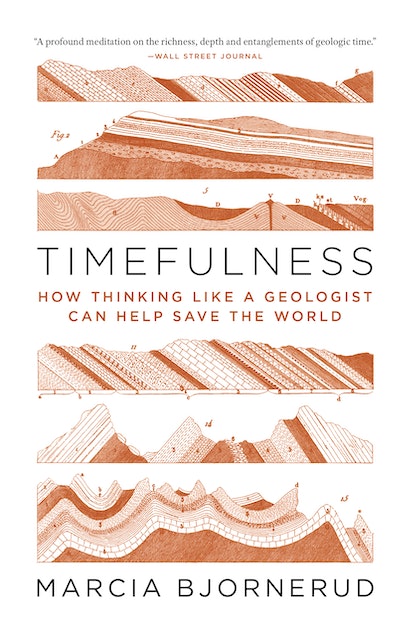 What exactly do you mean by Timefulness?

It’s the habit of seeing things not merely as they are now, but also recognizing how they evolved—and will continue to evolve—over time. In a sense, it’s perceiving the world in four dimensions. I use the word as a deliberate counterpoint to the idea of Timelessness, which is an impossible, and ultimately sterile, aspiration. Unless you’re jet-setting around the cosmos at relativistic speeds, nothing exists outside the framework of time; every person, idea, culture, organism, landscape, and continent exists in a particular time-stamped moment while also bearing vestiges of a much deeper historical and evolutionary past. We tend to view these entities only as they appear in the current temporal plane, but their paths through time shaped what they are now, and what they may become in the future. In other words, all things are full of Time— they’re Timeful. The natural world in particular is bursting with backstories— tragedies, comedies, sprawling million-year sagas, chronicles of forgotten empires. Reconceiving everything, including ourselves, as entities sculpted by time is a perceptual shift that can be transformative on the personal and societal levels.

I don’t quite get the connection with geology.

This way of viewing the world is the very essence of geological thinking – being able to hold in the mind’s eye multiple past— and plausible future— iterations of the Earth and its ecosystems. I recognize that geology suffers from a public perception problem; people either associate it with musty museum displays or rapacious oil companies and mineral prospectors. But in fact it’s an intellectually vibrant science that requires exceptional powers of imagination: the capacity to zoom in and out of spatial and temporal scales, and to visualize long vanished landscapes and inaccessible parts of the Earth we can never see directly. Geology is also a strange field in that it addresses both very pragmatic questions—where to find groundwater, how to protect people from natural hazards—and deep, even philosophical ones: Where do we come from? Why is the Earth the way it is? Both kinds of questions are important to humans, and both require a keen sense of temporal proportion—the relative and absolute durations of the great chapters in the planet’s past, the characteristic rates and timescales of natural phenomena. But as a society, we are largely time-illiterate: shockingly ignorant about how our activities intersect with the Earth’s long-established habits.

Human and geological timescales are so vastly different – why does it matter if ordinary people have a feeling for ‘deep time’?

Actually, they’re not as disparate as one might think. Geologists have perhaps overemphasized the idea that the Earth is incredibly old and slow-moving and that humans are mere last-minute walk-ons. I think this misrepresents our place on Earth in a number of ways. First, we humans may have taken our current form only recently, but we have very deep roots in the evolutionary tree. Second, even though we may be relative newcomers, we are having an outsized effect on the planet. Finally, the Earth’s habits are really not that sluggish. Today, satellite observations allow us to see glaciers and tectonic plates moving in real time. Many geologic processes—erosion, river migration and climate change, for example—can play out well within a human lifetime. And some of the planet’s behaviors, like earthquakes and landslides, happen so fast that we are left dazed in their aftermath. Earth has many tempos and modes, many still being discovered and documented.

Throughout the book, you weave in the intellectual history of geology and explain how we have come to our current understanding. That must be intentional?

Yes! The story of how humans have gradually come to understand the character of our planet and managed to reconstruct its deep history is itself a fascinating evolutionary tale. Calibrating the geologic timescale is arguably one of humanity’s greatest intellectual achievements. Yet it is underappreciated because it is not the work of a solitary genius but instead a collaborative effort of people making observations all around the globe over the past two centuries – and it’s still a work in progress. Along the way, there have been scientists, both amateur and professional, who had brilliant insights but were too far ahead of their time for their ideas to be verified by available data. There have also been experts much celebrated in their own day who proved to be completely wrong about the nature of the Earth and who held the science in check during their lifetimes. So yes, the book is both about the idiosyncratic history of the Earth, and the equally idiosyncratic history of human understanding of the Earth.

Some people find the idea of geologic time terrifying because it makes them feel insignificant. How do you respond to that?

I can understand that reaction and again I think we geologists ourselves are partly to blame for flogging people over the head with the vastness of geologic time. I had a math professor who was fond of pointing out that, “there are many sizes and shapes of infinity.” The same can be said for different points in the geologic past. Some are a long time ago—some are a long, longtime ago. Developing some ‘depth of field’ in thinking about geologic time makes it seem less like a yawning abyss, and then filling it in with the narrative details of Earth’s development transforms it into an awe-inspiring origin story that embraces, rather than excludes, us. I personally find existential comfort in knowing that I am a resident of an ancient, resilient, marvelously complicated planet that has been teeming with life and continuously reinventing itself for 4 billion years.

OK, but can Timefulness really “help save the world?”

First let me emphasize that by “world” I don’t mean the planet; Earth will be fine with or without us and will survive the damage we are currently inflicting on it in the same way that it has endured previous calamities. It’s the stability of the world as we humans define it— the political, economic, social and cultural world— that is in grave peril. And yes, I would argue that Timeful, long-term thinking is essential to saving that. At a time when we urgently need mechanisms in our political and economic systems that encourage long-term planning, our attention spans keep shrinking. The few leaders who aspire to keep the long view in mind find themselves removed from boardrooms and public office by impatient shareholders, voters and corporate interests that benefit from the short-sightedness of the collective. The capacity to think on even decadal timescales—zooming out just enough to recognize our common past and shared destiny as human creatures on a changing planet— may be a way to spring ourselves out of the polarized, antagonistic, segregated mindsets and habits in which we have trapped ourselves. The narratives of natural history are a heritage we all share as Earthlings, and expanded awareness of that legacy— a little Timefulness—may liberate us from our self-absorbed narcissism and other self-destructive tendencies.