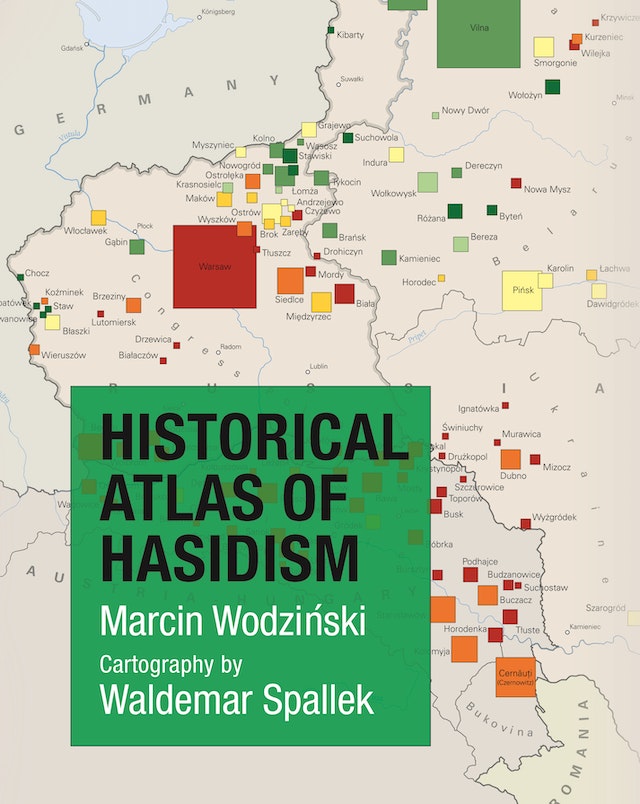 Historical Atlas of Hasidism
Available in 2 editions
Buy This

Historical Atlas of Hasidism is the very first cartographic reference book on one of the modern era’s most vibrant and important mystical movements. Featuring sixty-one large-format maps and a wealth of illustrations, charts, and tables, this one-of-a-kind atlas charts Hasidism’s emergence and expansion; its dynasties, courts, and prayer houses; its spread to the New World; the crisis of the two world wars and the Holocaust; and Hasidism’s remarkable postwar rebirth. Historical Atlas of Hasidism is visually stunning and easy to use, a magnificent resource for anyone seeking to understand Hasidism’s spatial and spiritual dimensions, or indeed anybody interested in geographies of religious movements past and present.

What exactly is the Historical Atlas of Hasidism?

MW: This is the first cartographic interpretation of the mystical movement of Hasidism. 280 pages of large-format, full-color maps, images, and text about Hasidism, from its origins in the mid-eighteenth century until today.

What is the appeal of the Atlas?

MW: Whoever gets it into his or her hands will notice that the atlas is simply beautiful. With more than one hundred charts, tables, and unique images, and with 74 beautifully designed full-color maps, this is simply a pleasure to flip through. But I believe there is much more to it. The atlas presents in a visually attractive, easy-to-understand cartographic form the spatial, physical, and visual dimension of a mystical movement. More than that, it demonstrates the meaningful interrelations between the movement’s spatiality and spirituality: Hasidism has been conditioned by its geographic characteristics not only in its social organization, but also in its spiritual life, type of religious leadership, and cultural articulation. On the more general level, this atlas offers an innovative way of looking at a religious movement that might be inspiring for anybody interested in the history, sociology, or geography of religions. This is why I believe the atlas will have a wide readership.

Why does Hasidism require a special Atlas?

MW: Hasidism is one of the most important religious movements of modern Eastern Europe, contemporary Israel, and North America, and this for a number of reasons. For example, this is one of very few successful attempts at creating a religious movement that is both egalitarian and mystical, a real exception in the history of world religions. In addition, many people today are captivated by the extraordinary social and political success of the Hasidim, far beyond their rather moderate numbers. But maybe most importantly, even for those who have never heard the name of Hasidism, the image of traditional Jewry, of the “authentic Jewishness,” is informed mostly by Hasidism. Even though I disagree with this over-simplifying narrative, I believe it vividly represents the importance of the phenomenon.

But why maps, why an atlas as opposed to a standard monograph?

MW: How otherwise could we capture the spatial dimension of the movement? If you believe, as I do, that the Hasidim were not only otherworldly mystics, but also down-to-earth residents of specific locations in very specific historical context of Eastern Europe, then you need to ask what is relation between these two. The maps are not only the easiest way to show it, but they allow for much more than textual exposition. And, besides, today in the digital age, visualization might be the only way to get through with a complex message.

To put this same question another way: you’ve written on Hasidism before; what is unique about this book?

MW: I published my first book in Hasidism twenty years ago and I am still proud of this juvenile publication, as I am of other books I published later. But this book is indeed special. My previous books on Hasidism were more specialist, addressed mostly to the academic readers. This one is addressed to a wide group of readers, academic and lay. Each of the nine chapters introduces in a short, accessible way some central features of Hasidism, such as emergence, development of leadership, relation between religious centers and peripheries, demography, crisis of war and the Holocaust, etc. This very accessible introduction leads to the analysis of how these phenomena were affected by and found representation in space. In other ways, each chapter attempts to be accessible, but at the same time to offer some innovative understanding of the movement (and of a spatial dimension of any religion by implication). The same way, the maps have been conceptualized so that they communicate both the big message, something that you might grasp in the blink of your eye, and a far more developed, complex message, something that you need to read the map carefully for in order to see and understand. In this sense, the atlas both makes the history of Hasidism accessible to a freshman and introduces an expert knowledge on aspects that will be hopefully novel to both the students of Hasidism and a larger group of historians, sociologists, and geographers of religions.

Is it really a book for everybody?

MW: I wouldn’t put it that way. The book is academic. But we, the cartographer and I, made a lot of effort to make it accessible, attractive, and engaging for a wide group of non-academic readers, too, e.g. those interested in Jewish history, Judaism, and history of religion more generally. Also, as the maps contain much geographical detail, e.g. thousands of places of residence of Hasidic leaders, thousands of Hasidic prayer halls, this will be of interest also to lay readers interested in local history, family histories, etc.

The scope of the Atlas sets it apart from other publications. Can you explain how?

MW: This atlas broadens our understanding of Hasidism in three important ways. First, it looks at the movement beyond the Hasidic leaders at thousands of their followers living far from Hasidic centers. This is new, innovative, and I think very needed corrective to the dominant trends in research on Hasidism. Second, it examines Hasidism in its historical entirety from its beginnings in the eighteenth century till today. Very few publications are similarly comprehensive. Most importantly, responding to the challenge of digital humanities, it uses the diverse collection of qualitative, but above all quantitative data of diversified origin, including extensive GIS-processed databases of historical and contemporary records. The largest database is nearly 130 thousand records! Several others have thousands of records. I don’t know any similar publication on Hasidism, or, indeed, on any other religious movement.

Does the Atlas have real world applications?

MW: I believe every knowledge has real world applications, at least by making us wiser. Well, of course, some sections might have direct application. For example my mapping of the settlement patterns among Israeli Hasidim might be successfully used by the Israel city planners or government administration in allocation of resources. For some others, the atlas might become an inspiring guidebook for cultural, or, indeed, spiritual tourism in Eastern Europe. Hasidism pilgrimages are today enormous enterprise with tens of thousands of Hasidim and non-Hasidim visiting graves of the tsadikim and other Hasidic sites. Finally, many maps are simply beautiful, so my wife says they will make perfect print for tablecloths, T-shirts, and postcards. We can’t wait to open a souvenir shop!