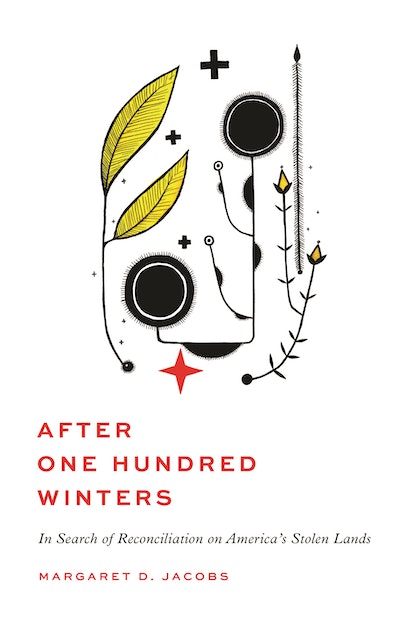 MJ: Since 1998 I have been studying the policy and practice of Indigenous child removal in settler colonial nations, including the Indian residential schools in Canada, Indian boarding schools in the U.S., and the Stolen Generations in Australia. I became intensely curious about the ways in which Australia and Canada had embarked on national truth and reconciliation processes to face up to and make amends for this 100-year practice and wondered what it would take for the US to come to terms with its own histories of Indigenous family separation. That was my initial impetus for the book. But After One Hundred Winters took on a life of its own and insistently compelled me in another direction.

Tell us more about that—how did you change directions?

First, when I started the project, I thought that I wanted to do a lot of interviews with people all over the world—both of Indigenous and settler background—who were engaging in reconciliation in some way. In the past, when I conducted such interviews, I squirreled them away in my basement or on a hard drive. This time, I thought, wouldn’t it be cool to share these interviews with anyone who was interested, in the form of podcasts. Then I thought what if the process of carrying out these interviews could itself be a form of reconciliation, if I worked in partnership with an Indigenous person who had similar interests? That led me to meet a Lincoln, Nebraska journalist named Kevin Abourezk, who is a member of the Rosebud Lakota nation. He and I decided to start a project called Reconciliation Rising. Our interviews led me to focus on grassroots reconciliation as much as the grand national schemes. And they led me to think about my own background as a white settler and my personal connection to this history. All that comes out in the book.

Second, when I started the project, I was very starry-eyed about the Stolen Generations Inquiry in Australia and the Canadian Truth and Reconciliation Commission. But then I read a lot of Indigenous critiques of these efforts. Yes, these government-sponsored initiatives brought attention to the issue of child removal and made some important reparations, but they were often unsatisfying to survivors and their Indigenous communities. These critics pointed out that these national schemes failed to grapple with the founding crime against Indigenous peoples in all settler colonial nations: the theft of land. Without acknowledging and addressing this, they would never bring true healing and justice to Indigenous people.  This led me to broaden my inquiry beyond child removal.

MJ: I think sin, in Judeo-Christian terms, implies a universality and an inevitability. We are all sinful, right? And we can’t help it. But there was nothing inevitable about slavery or land dispossession; historical actors made choices to enslave Africans, steal Indigenous land, massacre Native people, and exile them from their homelands. These are crimes with clear perpetrators, victims, survivors, and perhaps most importantly for my book, beneficiaries.

And crimes require some form of justice, not just repentance. In this case, the crimes were carried out on such a mass scale and for so long, that it is impossible to bring the original perpetrators to justice. But today we settlers can take responsibility for what happened in the past and engage in restorative justice, a catch-all term for addressing a collective harm and promoting collective healing.

Why do you use the term “settlers” to refer to non-Indigenous people?

MJ: One part of facing up to our history is acknowledging that the United States is a settler colonial nation, just like Australia and Canada. The term “settler colonialism” is widely accepted and used in those countries. It refers to a form of foreign intervention bent on transferring vast territories from Indigenous peoples to their colonizers and the elimination and replacement of the Indigenous population with that of settlers. I think many Americans are uncomfortable thinking of themselves as settler colonists, but I think we can’t move toward reconciliation until we acknowledge this basic fact.

But nobody is settling on American Indian land now. Why do you use the term “settlers” for people today?

MJ: I think many people that I call “settlers” today believe that they had nothing to do with dispossession or the historical abuses of Indigenous peoples in the United States. But all of us who are settlers have benefitted enormously from Indigenous land, and still do, even if we had no direct hand in removing Indian people from it. That is why we have a responsibility toward Indigenous people to make redress for the past.

How exactly can we make redress? What would you say to those who say we can’t just give all the land back.

MJ: Well, actually we can, or at least some of it. In the process of writing this book, Kevin Abourezk and I learned of many white settlers, organizations, churches, cities, and even corporations that are repatriating land to tribal nations. I would go so far as to say that this is a grassroots social movement. Kevin and I are making a documentary about it, in fact. And there are many other ways to make redress, at all levels of our society, that I explore extensively in the book.

Margaret D. Jacobs is professor of history and director of the Center for Great Plains Studies at the University of Nebraska–Lincoln. Her books include White Mother to a Dark Race: Settler Colonialism, Maternalism, and the Removal of Indigenous Children in the American West and Australia, 1880–1940. Website reconciliationrising.org