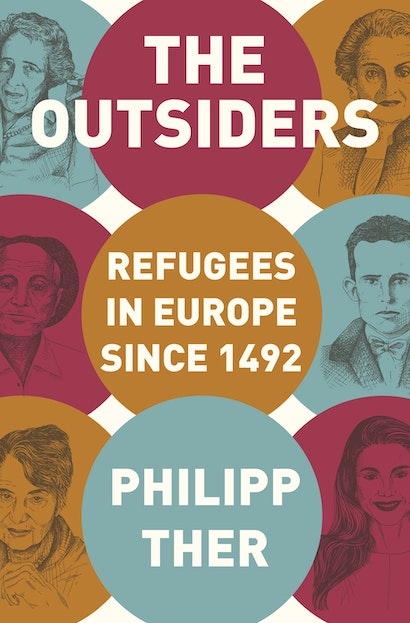 The Outsiders
Available in 3 editions
Buy This

European history has been permeated with refugees. The Outsiders chronicles every major refugee movement since 1492, when the Catholic rulers of Spain set in motion the first mass flight and expulsion in modern European history. Philipp Ther provides needed perspective on today’s “refugee crisis,” demonstrating how Europe has taken in far greater numbers of refugees in earlier periods of its history, in wartime as well as peacetime.

The refugee crisis in both the United States and Europe seems very much of the present moment, but your book looks at refugee movements from 1492. What happened in 1492 that made it the natural starting point for the book?

PT: 1492 is remembered, of course, as the year that Christopher Columbus first set foot on American soil. But in the same year, Spanish troops vanquished the last Muslim-governed kingdom on the Iberian Peninsula. 300,000 Spanish Muslims and as many Sephardic Jews were driven out of Spain, and an unknown number of people died as a result of mass persecution. The clergy called this “cleansing” essential for religious purposes; radical nationalists adopted this ideology in later periods.

So there are many continuities between early modern history—when the terms “refuge” and “refugee” were codified—and recent periods. A key difference is that early modern rulers mostly welcomed refugees, especially if they adhered to the same faith. Moral convictions aside, these rulers admitted refugees based on utilitarian calculations. The rulers and the elites knew that their countries would profit from the intake of refugees, as have the United States throughout their history.

Why are some refugees accepted, and others rejected/villainized/etc.?

PT:People have tended to fear foreigners, so refugees with similar religious, political and ethnic backgrounds have an advantage over refugees of a different nationality or race. Depending on the attitude of the receiving nation, ruling elites, or sometimes a single president, these refugees might be branded as dangerous just based on their differences. Radical nationalism and other collectivist ideologies have been used many times to exclude—and even reject—refugees and other migrants.

However, there have been times when refugees were generously admitted. During the Cold War, the United States welcomed many refugees from Communist countries, largely because they symbolized the superiority of the West. Since the 1970s, receiving nations have admitted refugees on the basis of humanitarianism, but it was often limited and contradictory. In recent times, there has been a resurgence of nationalism. The backlash against refugees and humanitarianism since 2016 is not new, however. Radical nationalism and blatant racism are to blame for periods of closure in the ‘20s, ‘30s, and ‘80s in the US and Europe.

What was one of the most surprising or shocking bits of information that you came across in your research?

PT: Based on my own family history, I was always aware that refugees can fail in their attempts to flee and to reach a safe place and country. But I was not aware that in the course of history, millions of refugees have been rejected or deported to their countries of origin. My individual case studies reveal the dire consequences of rejection or deportation. Death was an ever-present companion to refugees.

In what ways do countries that accept refugees benefit from granting them asylum?

PT: The US and various European countries have almost always profited culturally, politically, and economically from the intake of refugees. Former refugees (think Henry Kissinger, Zbigniew Brzeziński or Madeleine Albright) have played a prominent role in US and European governments. I also have taken the word “profit” literally and backed it up with data. The “economic miracle” in postwar Germany was based on the intake of 12 million refugees from Eastern Europe and the GDR. And since the 1990s, Austria—my country of residence and honorary citizenship—has profited economically from the arrival of refugees from former Yugoslavia.

There are only very few cases in which there has been a mixed or negative legacy. This is true for the Palestinians, who were denied equal rights and integration in the countries of arrival (with the exception of Jordan). This has destabilized the Middle East since the war of Israeli Independence in 1948.

What can we take away from this book?

PT: Unfortunately, it is very hard to “learn from history” in the literal sense. But I hope that we can avoid the repetition of past mistakes. The exclusion of refugees has always had a bad impact on the integration of western societies and of migrants who have arrived previously. I am afraid that the present political climate will result in the alienation of immigrants and minorities who are already living in the US and Europe for a long time and even several generations. There is a danger that the rising tensions will escalate to violence.

But there’s a lot to be optimistic about, too. Although some of my individual case studies reveal tragedies, I am very impressed by how courageous, inventive and energetic many refugees have been. Most of them—at least in the second generation—were able to start new lives. They succeeded to their own benefit and that of the receiving societies.

Philipp Ther is professor of Central European history at the University of Vienna. His books include Europe since 1989: A History (Princeton), The Dark Side of Nation-States: Ethnic Cleansing in Modern Europe, and Center Stage: Operatic Culture and Nation Building in Nineteenth-Century Central Europe. He lives in Vienna.