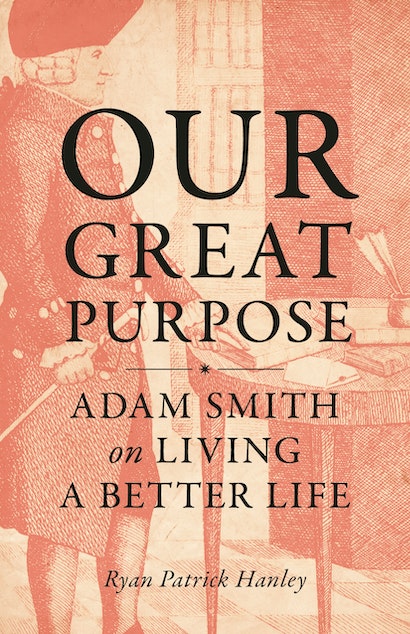 Our Great Purpose
Available in 3 editions
Buy This

Adam Smith is best known today as the founder of modern economics, but he was also an uncommonly brilliant philosopher who was especially interested in the perennial question of how to live a good life. Our Great Purpose is a short and illuminating guide to Smith’s incomparable wisdom on how to live well, written by one of today’s leading Smith scholars.

Can you talk a little bit about the significance of the title? What is “our great purpose?” What is Adam Smith arguing here?

RPH: Great question.  Most of us today don’t talk in terms of our “purpose” – that sounds stilted.  I’ll confess that the first time I typed the title what came to mind was the scene in The Jerk when Steve Martin discovers his “special purpose”!  But the more I thought about the title, the more I liked it.  At some point, most of us have probably asked ourselves – maybe in a meditative moment, maybe in a moment of frustration or despair – just what the point of it all is.  Adam Smith wondered about this too, and what he says about it is certainly striking.  For many people, he says, the “great purpose of human life” lies in “bettering our condition.”  But Smith knew better than anyone that there’s more to life than money and status.  The truth, he thinks, is that we were put on earth for a different reason.  In his words: “Man was made for action, and to promote by the exertion of his faculties, such changes in the external circumstances of both himself and others, as may seem most favorable to the happiness of all.”  This, from the founding father of capitalism!  To say the very least: for Smith, winning isn’t everything.  The truth is that we’re “made for” others at least as much as for ourselves.

Adam Smith is synonymous with modern capitalism. What got you interested in him as a moral philosopher?

RPH: Like most people, my first introduction to Smith was to his economics in the Wealth of Nations, which I read bits of as an undergraduate.  But the summer after my junior year I interned at a think-tank in Washington.  There I very quickly discovered that whatever my great purpose might be, it certainly didn’t lie in politics.  But happily I had the good fortune to be sent off to do some research in the think-tank’s library, where I found a set of Smith’s complete works.  I cracked open The Theory of Moral Sentiments and was hooked.  TMS introduced me to a way of thinking about morality and society that was, for lack of a better term, more capacious than anything I had yet encountered. I had learned a little bit about various aspects of moral and political philosophy from different thinkers who I had begun to read.  But Smith was the one who put it all together for me, and introduced me to a way of seeing how these different concepts – sympathy and self-interest, justice and benevolence, virtue and corruption – hang together.  I learned a lot about myself and my world reading TMS in that think-tank library, and coming in on three decades later, every time I go back to TMS I’m amazed at how much I still have to learn and how much it still has to teach me.

The book addresses the moral costs of capitalism—greed, corruption, etc. What do you make of his embrace of both capitalism and morality?

RPH: Smith’s understanding of the relationship between markets and morals has interested his readers for a long time.  This goes back at least to the nineteenth-century German scholars who started asking how and whether his two books – one on ethics, one on economics – add up to a coherent system.  Personally, I find two aspects of Smith’s understanding of the relationship of markets to morality especially interesting.  First, Smith thinks markets are morally beneficial for how they generate a general opulence that particularly benefits the least well-off.  That’s a crucial side of Smith that scholars appreciate better now than ever, even if Smith’s popular reputation hasn’t quite caught up with it yet.  Second, and more importantly for this book, I’m fascinated by Smith’s analysis of how modern commercial society opens up unique opportunities for both vice and virtue.  Living a good life in the kind of world in which we live today requires us to develop certain capacities, skills, and virtues that enable us to flourish amid the unique temptations and constraints of a market society.  So Smith shared with ancient thinkers like Aristotle an interest in human flourishing.  But his comparative advantage lies in the fact that where Aristotle’s theory of human flourishing was developed for a context very different from our own, Smith wrote for our world.

What’s the most compelling part of his philosophy, in your opinion?

RPH: I find so much in Smith compelling that I’d hate to have to choose.  So I’ll take an easy out and tell you what I find to be the least compelling part of his philosophy!  As good as he is at describing and articulating so many real human feelings – the experience of sympathy, the experience of anxiety, the experience of joy – I think he misses a lot when it comes to the experience of romantic love.  So there, I’ve said it: Smith isn’t perfect (and neither is anybody else – a point that itself turns out to be central to his ethics!).

What should readers take away from this book?

RPH: Well, I certainly hope it will inspire readers to read (or re-read) Smith, and to encounter firsthand the full range of his insights and wisdom.  But I also hope it affords readers an opportunity to step back and think through for themselves what exactly a worthwhile life might look like today in light of all the unique opportunities and challenges of our world.

Ryan Patrick Hanley is professor of political science at Boston College. He is the author of Adam Smith and the Character of Virtue and the editor of Adam Smith: His Life, Thought, and Legacy (Princeton) and the Penguin Classics edition of Adam Smith’s The Theory of Moral Sentiments.