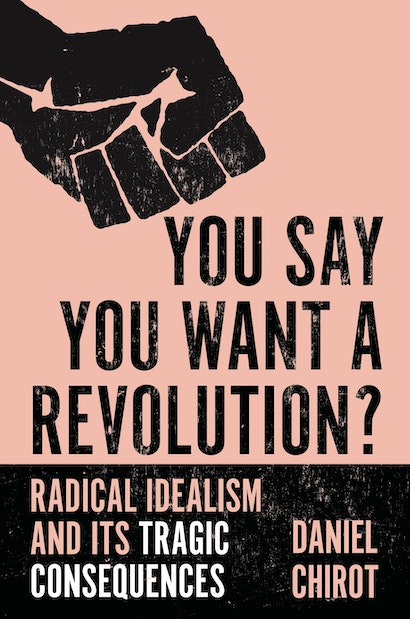 You Say You Want a Revolution?
Available in 3 editions
Buy This

Are we headed for a new set of momentous revolutions like the iconic French and Russian ones of 1789 and 1917? What causes major revolutions? Can we learn something by looking at not just the French and Russian ones but the twentieth century events such as the Mexican revolution of 1910 or the Iranian one of 1979? Does the German Nazi takeover of power in 1933, which was peaceful and legal at first but then sought to violently transform Germany and create a dramatically new kind of society count as a genuine revolution? What about the many anti-colonial revolutions, some of which such as the ones in Algeria and Vietnam were extremely bloody? Why did all of those mentioned so far, but also many others, including the Chinese and Cambodian communist revolutions turn into murderous tragedies?  Why was the American Revolution of 1775 different, or was it really? To understand what all revolutions have had in common is to take a big step toward answering the original question: will such catastrophes happen again?

Revolutions were invariably preceded by years of incompetent governance. Autocrats, hereditary monarchs, and colonial authorities failed for prior decades to recognize that change was necessary and that an accommodation with moderates was more likely to be successful than brutal repression that hit more liberal reformers hardest and left the way open to radical revolutionaries.

It is astounding to look back at the way Nicholas II of Russia and his court prevented liberal political reforms from taking hold, then stumbled into a catastrophic war without realizing they were heading toward disaster.

The French government had been bankrupt for years before 1788, but its selfish aristocracy blocked needed tax reform. After the Revolution broke out in 1789 moderate liberals took control but Louis XVI and his court refused to give up many of their privileges, tried to rely on foreign intervention to save themselves, and provoked a populist leftist reaction by the Jacobins that led to the reign of terror. It is astounding to look back at the way Nicholas II of Russia and his court prevented liberal political reforms from taking hold, then stumbled into a catastrophic war without realizing they were heading toward disaster. When the February 1917 Revolution overthrew the Nicholas its moderate leftist leaders foolishly stayed in the war and eventually fell to Lenin’s Bolsheviks. The same happened to the Shah of Iran who persisted in persecuting liberal reformers until he was overthrown and those now hapless liberals were quickly replaced by radical Islamists.

It is depressing to look at the record of European colonialism in the early twentieth century when independence leaders were eager to move toward gradual liberalization and eventual independence. France could have ended with a much better outcome but instead fought two bloody wars to preserve its empire, leading to the triumph of ultimately oppressive  and much more extremist revolutionary forces. Britain’s criminally inept promotion of Muslim separatism in order to divide and rule in India, and its incompetent partition plan led to tragic massacres and a festering Pakistani-Indian divide that has never been healed. Britain had done this before in Ireland by refusing for too long to grant it more autonomy, and that also led to civil war.

The British could have granted the greater autonomy and control over its taxation to its American colonies and avoided the revolution of 1775. Once that revolution triumphed in 1783, however, it took an unusual path by remaining socially moderate. But before celebrating this moderate success too much we need to remember the second, far more destructive part of the revolution. As the economic importance of slavery grew instead of diminishing, the South became increasingly radicalized. Its landowning elite, resisted accepting what should have been obvious about the ultimate incompatibility of slavery with a modern, industrializing, democratic society. The South fell into the hands of its most uncompromising big slaveholding landowners. They revolted and began America’s most destructive ever war. The ensuing problems of racism and southern exceptionalism have never been solved.

Even in the case of the Nazi accession to power it was clear that the conservative attempt to deal with the Depression by fiscal restraint had become dysfunctional. When populist anger rose, Germany’s ruling arch-conservative elite turned to Hitler, whose Nazis had captured much of that populism, rather than trying to compromise with more progressive moderates who would have promoted something like the American New Deal started by Roosevelt in 1933.

The point is not to use hindsight to just to assign blame for past events, much less to claim that history somehow repeats itself in any exact way. Rather, seeing commonalities between the past and the present by using historical examples does offer some guidance. Lasting political paralysis, overly conservative insistence on holding on to obsolete world views, and the arrogance of those in power who think they can suppress discontent indefinitely leads to political polarization and often to upheaval. That is exactly what we are now experiencing in many parts of the world. Recognizing that the potential for destructive revolutions remains real, we can hope to avoid the extremism of both right and left-wing populism.

Populism of the right, as we see today, or that took power in Germany in 1933, has a poor record of solving problems. Populism of the left, from the time of the French Jacobins in 1792 to the corrupt and destructive rise of Hugo Chavez in Venezuela has an equally bad record.

Today angry populism is mostly right wing. That, unfortunately, leads to incompetent responses to serious problems of inequality, climate change, the demographic decline of advanced societies, migration, and unsettling technological innovation. In all of these areas denying the nature of the problem, or proposing populist but ineffective remedies solves nothing. Whether it is The United Kingdom split by Brexit, the United States and Brazil that are led by regimes whose policies either exacerbate environmental problems and inequality, or India’s failing democracy that is veering toward fascist-like oppression of its large Muslim minority, none of these problems will go away. European populists are as bad, and risk destroying the European Union, a solution that will leave all of Europe economically, politically weaker, and less able to face its challenging problems.

Populism of the right, as we see today, or that took power in Germany in 1933, has a poor record of solving problems. Populism of the left, from the time of the French Jacobins in 1792 to the corrupt and destructive rise of Hugo Chavez in Venezuela has an equally bad record.

Failing to solve, or even to admit the existence of chronic, difficult problems often ended in tragedy in the past, and in the most extreme cases to revolutions that made things even worse. What is alarming today is that much of the world is setting out on this very path. The response so far leads to the conclusion that we must reverse this kind of incompetence. Otherwise even some of the most seemingly stable and previously successful countries will experience destructive upheavals whose ultimate consequences cannot be predicted.

Daniel Chirot is the Herbert J. Ellison Professor of Russian and Eurasian Studies at the Henry Jackson School of International Studies at the University of Washington. He is the author of many books, most recently, The Shape of the New: Four Big Ideas and How They Made the Modern World (with Scott L. Montgomery) (Princeton), which was named one of the New York Times Book Review’s 100 Notable Books of the Year.