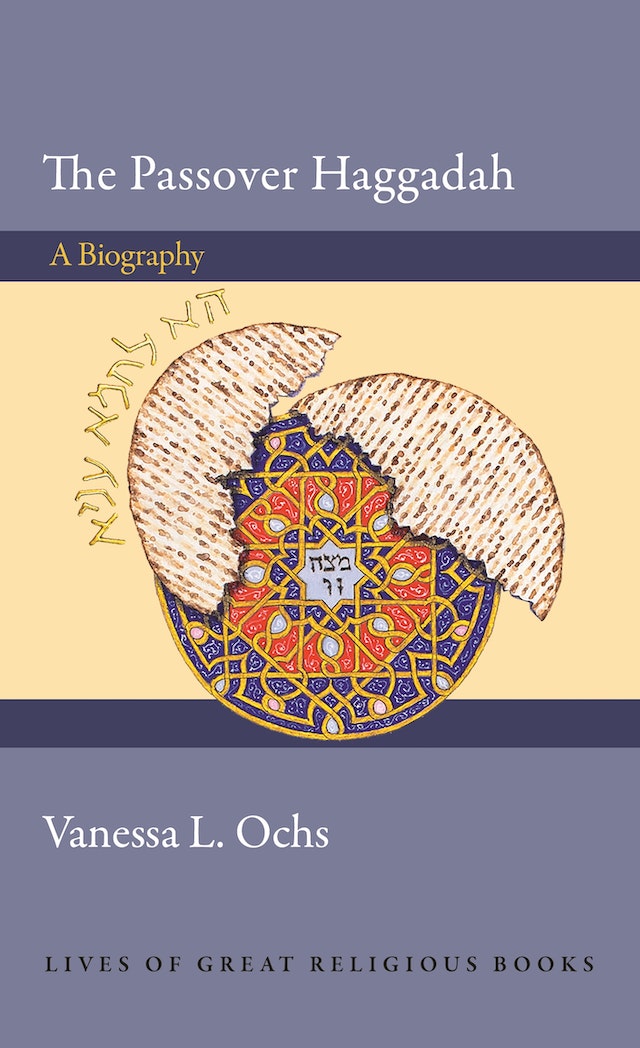 The Passover Haggadah
Available in 2 editions
Buy This

The Haggadah, the text for the Passover seder meal, is supposed to teach the story of Exodus, primarily to the young. It does that poorly, for it assumes that readers are so well versed in the story that they’d prefer to dwell instead on ancient commentaries. Some families, failing to find a coherent Exodus story, just put their haggadahs down after enough cries of “When do we eat?”

One year, my late father-in-law came up with a surprising solution to address the Haggadah’s shortcoming.

He was a man of science who practiced Judaism with fierce correctness on one night alone, the eve of Passover as presided over the seder. With a stiff yarmulke on his bald head, he sat at the head of the table, bolstered by a couch pillow, following the Haggadah’s instruction to “lean.” The rest of us took his direction and read one paragraph each, usually in English, unless we chanced upon a blessing, which we either croak out or chant in Hebrew. Our text was a 1964 edition published by Fortunoff’s, a jewelry and home furnishing store founded in Brooklyn, New York. The back cover featured a picture of Moses holding a ten commandments that looked like—yes—two golden wrapped gift boxes, and yes again, the caption below did read: “Live Rich—You Can Afford to at Fortunoff’s.” On its last page, we could see a picture of a Chanukah menorah, surely out of season, and were reminded of “THE LARGEST SELECTION OF THE MOST ELABORATE ISRAELI GIFTWARE AND SILVER ITEMS AT TRADITIONAL FORTUNOFF PRICES.”

After directing us through the Haggadah’s round of preliminary blessings over wine and parsley, an anxious but well-prepared grandchild asked the ma nishtana, the required four questions. After the child was praised, we expected my father-in-law to launch into the next paragraph called magid that tells the story in a nutshell: “We were slaves to Pharaoh in Egypt, and the Lord our God brought us out of there with a strong hand and an outstretched arm. If the Holy One of Blessing had not brought our ancestors out of Egypt, we and our children would still be enslaved to Pharaoh in Egypt.”

Instead, he announced, “Enough!” as if he were stopping his car because of the mayhem in the back and threatening his children that they would have to get out and walk. He then got up from the table and exited theatrically from the dining room. With mischief in his eyes, he returned from his study with a Bible in hand, “The Five Books of Moses,” Everett Fox’s 1995 poetic rendering based on the Buber-Rosenzweig translation that we had given him for his birthday. It was time, he declared, to read “the real story of Exodus.” We had spent too many years rambling on in ignorance about the rabbis of Bnai Brak, about Ben Zoma deciding if all the days of your life also included the nights, Arameans (or were they Armenians, as we inevitably mispronounced the word, and what did Laban the Syrian try to do to our father Jacob anyway, and what was the business with the goat and the cat who ate the goat?). “All that mumbo-jumbo” was his catch-all for the Haggadah’s rabbinic midrash, commentaries, digressions, allusions and songs that few of the aunts, uncles and children had been trained to decipher or appreciate. At the end of each year’s seder, as we polished off my mother-in-law’s brandied prunes and matzah nut torte, we knew no more than what we had started with. And so he read aloud to us from the Book of Exodus, from the slaves crying out, to God heeding their cry, to Moses being saved, and then later, being called upon to tell Pharaoh to “Let my people go.” No going around the table this time so everyone had a turn. He alone read, and with the booming expression he used for “O Captain, My Captain.” The youngest grandchildren were kept alert by the novelty for a stretch, and when they fell asleep or wandered off, he kept going, going strong until every last Child of Israel crossed the sea, even when Uncle Harold, a salesman at a big box appliance store, started a loud side conversation with Aunt Sadie, telling her never, never to purchase a service contract, a solemn admonition that I remember and observe to this day as if it were a codicil to the Ten Commandments.

It was the longest seder of our lives, but at least those of us who were still listening at the end finally knew more of what the Haggadah assumed we had known about the story of Exodus all along. Even Uncle Harold, who missed saying the lines that prompted laughs each year when he turned Rabbi Yosei into the Hispanic Rabbi José, said the parts of the story he had caught were news to him.

Vanessa L. Ochs is professor in the Department of Religious Studies at the University of Virginia and an ordained rabbi. Her books include Inventing Jewish Ritual, which won a National Jewish Book Award; Sarah Laughed: Modern Lessons from the Wisdom and Stories of Biblical Women; and Words on Fire: One Woman’s Journey into the Sacred. She lives in Charlottesville, Virginia.