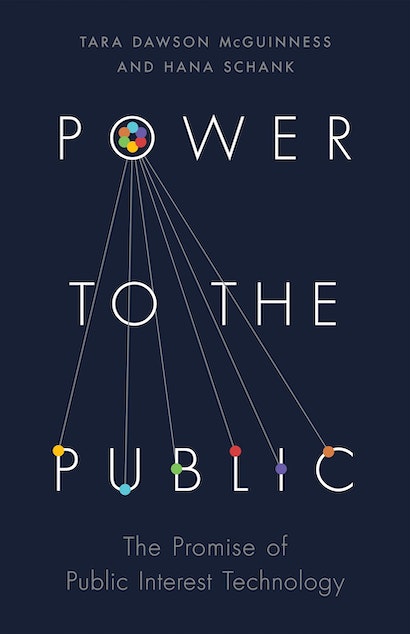 Power to the Public
Available in 2 editions
Buy This

The pandemic laid bare how brittle the systems are that we rely on to provide care in the US. From the drop in women’s labor market participation to the dramatic shortages in child care access and home care, Americans’ ability to work to provide for their families and care for their children and loved ones relies on a haphazardly strung together system, rife with holes. Congress and the Biden administration have made the case that care is infrastructure––putting forth the largest increase in child care funding since World War II and proposing an investment of $400 billion in home care workers.

But first, for policies like paid leave or child care subsidies to work, our government needs a reboot. Ask anyone who has attempted to get unemployment insurance––government is not set up to deliver services digitally.

The Affordable Care Act undertook the Herculean step of moving the United States towards universal health care. But, remember those crashing websites? Until the technology was solidified and people could access care, Obamacare did not really exist. Without a ruthless focus on execution to ensure that the right help reaches the people who need it, the new investment of the $2 trillion American Rescue Plan and the promises to bolster the care space in order to better support working Americans, could meet the same fate. Worse, it could imperil Biden’s chance to deliver other big changes and infrastructure investments our nation so desperately needs.

Right-headed policies are only the first step. When it comes to delivering those policies, usually via technology and the internet, government is critically short on the skills needed to get the right systems up, running and accessible to all. President Biden knows first hand how hard it is to put policy into action. He oversaw the execution of the 2009 Recovery package, and according to The New New Deal he was constantly on speed dial with nearly every state governor. But the world has changed in important ways since 2009, and the answers are simpler than you think. We have a few key pieces of advice for this deeply urgent moment.

First, design forms for real people. Any policy that requires people to fill out countless form fields or navigate unintelligible websites may as well not exist, because it won’t be accessible to large swaths of the population. Worst, the people who need help most don’t have time to refresh pages at 2 a.m. In our research, people described the process of applying for unemployment insurance as “crazy” and “a full-time job.” Americans tenacious enough to complete an application were often rejected. One New York sound engineer’s application took four months and intervention from a local elected official to get approval.

Michigan used to be home to the country’s longest benefits application. At 42 pages long, the form was an inhumane barrier between people desperately in need and the emergency services the state could provide. Today the form can be completed in under 20 minutes and processed by the state in half the time it used to take. Paying attention to form design could be the difference between feeding one’s family this week or not.

Second, test the system. Sometimes a process doesn’t work as expected. Testing a system reveals its flaws or weaknesses immediately.

A 2018 Federal Reserve report found nearly half of American families would be unable to cover an unexpected $400 expense. The Earned Income Tax Credit is the policy that is supposed to have addressed this problem. It is intended to give the 30 million families who qualify extra cash in their pockets through a tax credit. But the number of eligible families who either don’t know about the credit or are unable to access it is equal to the population of Colorado. We can do better.

To truly understand the steps required for Americans to access any policy, federal staff and agency administrators must first eat their own dog food. This means tracking the entire experience from start to finish. Fill out the online form. Time how long it takes. Could you understand and answer all the questions? Could a non-native English speaker? Could someone fill it out on a phone? Call the call center. Is there a wait? Is it longer than ten minutes? Is the person on the other end equipped to provide help? Pull these metrics together to create an overall picture. If this were a company would you be a repeat customer or run screaming to another store?

You can’t fix problems you can’t see. Track your efforts by monitoring data. Is the policy working as intended? What could make it better? Who is it not reaching? Real-time data monitoring was game-changing for the team working to right Healthcare.gov. Once they could see all the parts of the system in one place, they could prioritize where to get to work first.

More recently, the nonprofit Community Solutions used data to end veteran homelessness in over a dozen cities. You read that right: they took it to zero in multiple places. They assisted cities in creating a by-name list of all people experiencing homelessness and a data dashboard to monitor the homeless population’s movement across shelters, city offices, nonprofits and health services. This allowed the cities to understand in real time who was where and why, which in turn meant that city leaders could try new solutions and immediately see a policy’s impact.

Finally, create a culture where ground-level leaders feel free to tell the truth. Throughout history, every crisis has had people on the ground who saw it coming but who were either afraid to say so or were not allowed to speak up. When Mikey Dickerson, former administrator of the US Digital Service and one of the leaders of the Healthcare.gov rescue, first joined the federal government he learned that every agency had a dashboard monitoring their high risk projects. To his surprise, the data reflected on the self-reported dashboards suggested that everything was going smoothly all the time. It was obviously not true. Creating a culture inside federal agencies that values and welcomes clear-eyed truth telling and allows anyone to raise up solutions could be the difference between delivery and disaster.

While the American Rescue Plan has the potential to change the very fabric of American society for the better, it will fail without a strong focus on implementation. To restore faith in our nation’s government, the public needs to be able to ask for help and get it. President Biden has the power to retool our government so that it truly works for the people, by the people, in the digital age. That is not something we have today. But it is within our grasp. President Biden’s success may well depend on his ability to make it so.

Hana Schank is Strategy Director for Public Interest Technology at New America and the coauthor of The Government Fix: How to Innovate in Government and The Ambition Decisions: What Women Know about Work, Family, and the Path to Building a Life. Twitter @hanaschank