An unparalleled exploration of magic in the Greco-Roman world 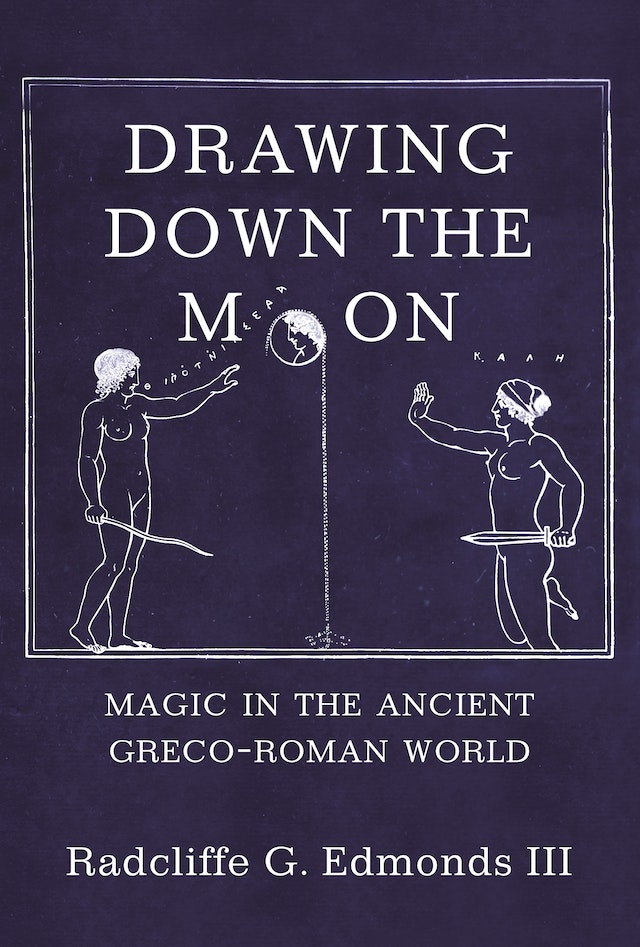 What did magic mean to the people of ancient Greece and Rome? How did Greeks and Romans not only imagine what magic could do, but also use it to try to influence the world around them? In Drawing Down the Moon, Radcliffe Edmonds, one of the foremost experts on magic, religion, and the occult in the ancient world, provides the most comprehensive account of the varieties of phenomena labeled as magic in classical antiquity. Exploring why certain practices, images, and ideas were labeled as “magic” and set apart from “normal” kinds of practices, Edmonds gives insight into the shifting ideas of religion and the divine in the ancient past and later Western tradition.

Using fresh approaches to the history of religions and the social contexts in which magic was exercised, Edmonds delves into the archaeological record and classical literary traditions to examine images of witches, ghosts, and demons as well as the fantastic powers of metamorphosis, erotic attraction, and reversals of nature, such as the famous trick of drawing down the moon. From prayer and divination to astrology and alchemy, Edmonds journeys through all manner of ancient magical rituals and paraphernalia—ancient tablets, spell books, bindings and curses, love charms and healing potions, and amulets and talismans. He considers the ways in which the Greco-Roman discourse of magic was formed amid the cultures of the ancient Mediterranean, including Egypt and the Near East.

An investigation of the mystical and marvelous, Drawing Down the Moon offers an unparalleled record of the origins, nature, and functions of ancient magic.

Radcliffe G. Edmonds III is the Paul Shorey Professor of Greek in the Department of Greek, Latin, and Classical Studies at Bryn Mawr College. His many books include Redefining Ancient Orphism and Myths of the Underworld Journey. Edmonds lives in Haverford, Pennsylvania.

"[An] ambitious and enthusiastic study of magic in classical antiquity."—Marina Warner, New York Review of Books

"An insightful and approachable survey of magical (or non-normative) practices and the beliefs thereto attached in Greco-Roman antiquity. The reasonable price and the attractive design of the volume, with high-quality pictures, make it particularly useful to students and general readers."—Leonardo Constantini, Classical Review

"Drawing Down the Moon can be recommended as an updated gateway into ancient 'magic' for English-speaking academic and public readers. Edmonds offers a rich overview of the present state of knowledge in the field announced by the subtitle: Magic in the Ancient Greco-Roman World."—Bryn Mawr Classical Review, Thomas Galoppin

"In Drawing Down the Moon, Edmonds has produced an extensive, engaging and, crucially, accessible overview which is likely to establish itself quickly as essential reading for anyone seeking to learn more about the vast array of topics that fall under the sweeping category of magic. . . . Ultimately, this work should be considered a resounding success and Edmonds is to be congratulated for providing an extensive and accessible introduction to such a wide-ranging and complex subject."—Jack Lennon, Bryn Mawr Classical Review

"By providing insightful analysis and marshaling an immense amount of information that covers a millennium of ancient culture, Drawing Down the Moon gives us a broad yet thorough overview of magic in Greek and Roman antiquity."—Sarah Iles Johnston, author of Ancient Greek Divination

“Drawing Down the Moon is the richest and most thoughtful investigation into the magic of the ancient Greco-Roman world currently available. I expect it quickly to become the first port of call for anyone interested in this subject.”—James B. Rives, author of Religion in the Roman Empire