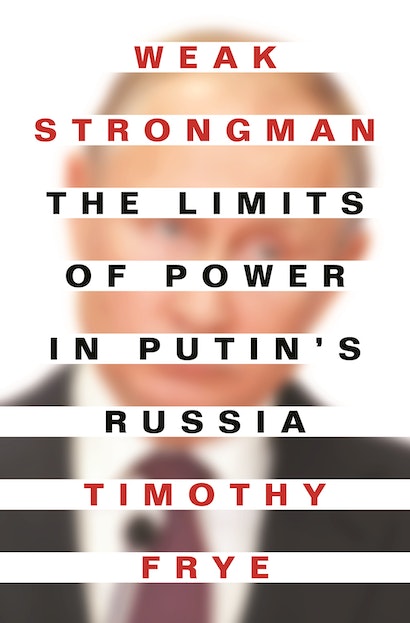 When I started teaching Russian politics in the mid-1990s, I sometimes joked that if I told my undergraduates that in Moscow on Tuesday people walk on their hands, then the students would dutifully jot down in their notes: “Moscow. Tuesday. Hands.” Not that they weren’t bright. They were. But Moscow is far, and Kremlin politics are opaque. Like most people, they needed basic information and context to understand Russia’s politics.

Weak Strongman aims to improve our great national debate about Russia by drawing on a host of fascinating new research that views Russia in comparative perspective. Most observers of Russian politics focus on either Vladimir Putin’s worldview or Russia’s unique history and culture. Yet these two narratives overlook a crucial body of scholarly work that understands Russia not as an extraordinary country run by an extraordinary leader, but instead as part of a group of modern nondemocracies. Tapping into this work allows a far richer—and more accurate—understanding of Russian politics today.

Recognizing Putin as an autocrat, and Russia as an autocracy like many others, may seem obvious—and yet doing so brings into sharp focus the inherent limits on his power that are common to autocratic rule, but are often overlooked in discussions about Russia. Putin faces many of the same trade-offs that other authoritarian governments face. Cheat too much on elections and signal weakness, but cheat too little and risk losing office. Use anti-Westernism to rile the base, yet not so much that it provokes an actual conflict with the West. Use corruption to reward cronies, though not so much that it stunts economic growth. Manipulate the news, but not so much that people distrust the media. Repress political opponents, but not so much that there is a popular backlash. Keep the security services strong, yet not so strong that they can turn on you. While many depictions of Russia focus on Putin’s seemingly unlimited power, this view recognizes that even autocrats as influential as Putin face significant constraints and difficult choices over policy because of the nature of autocratic rule. For the last twenty years, Putin has been unrivaled at home, but rather than the omnipotent ruler depicted in popular narratives, Putin is like many autocrats. He is a strongman, but a weak one.

To make the case for this view of Russian politics, I draw on thirty years of scholarship and experience as a Russia watcher, including stints working as an “information warrior” for the US Information Agency in the Soviet Union in the late 1980s, consulting for the Russian Securities and Exchange Commission in the 1990s, and co-heading a research institute at the Higher School of Economics (HSE) in Moscow since 2011. These experiences—from being an accidental target of a honey trap by the KGB in the Soviet era to witnessing the fall of the Twin Towers from Moscow in 2001—helped me understand how Russia does and does not work.

More important, I rely on research by a new generation of scholars that is frequently at odds with conventional wisdom and has received little attention outside academia. I recount how my colleagues and I conduct surveys with special questions designed to detect whether Russians are lying about Putin’s popularity; scour the internet to document hard to track political and economic ties among the elites; identify bots on Twitter to track propaganda campaigns; use Russian electoral data to reveal fraud; follow the Kremlin’s efforts to manipulate public opinion and interfere in foreign elections; gather archival data to trace how Stalin-era purges shape voting in contemporary Russia; track political graffiti in Moscow to study protest; and interview top Russian elites to explore how decisions are made in the Kremlin. This research, much of it unknown even to diligent readers, offers some of the best evidence we have of how Russia works. The goal is not just to deepen our understanding of Russian politics but also to add scholarly voices to our national debate on the topic.

Understanding the dynamics of Russian politics is as important as ever. Relations with the West have rarely been more contentious as Moscow and Washington spar on issues from arms control and democracy promotion to economic sanctions and national sovereignty. At home, the Russian economy has been stagnant for a decade, Putin-fatigue is rising, and the Kremlin’s inability to find a new narrative to legitimate its rule has led to an increasing reliance on repression in recent years. Yet, for all its problems, Russia remains a great power that shapes global politics for better and for worse, boasts a highly educated populace with vast economic potential, and is a formidable rival in cyberspace. Gaining a clear-eyed view of Russia is especially important now and Weak Strongman is a good place to start.

Timothy Frye is the Marshall D. Shulman Professor of Post-Soviet Foreign Policy at Columbia University and a research director at the Higher School of Economics in Moscow. His books include Property Rights and Property Wrongs: How Power, Institutions, and Norms Shape Economic Conflict in Russia and Building States and Markets after Communism: The Perils of Polarized Democracy. He lives in New York City. Twitter @timothymfrye