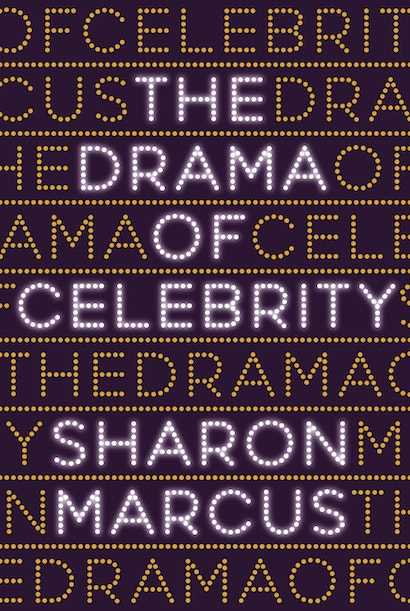 The Drama of Celebrity treats Sarah Bernhardt as the godmother of modern celebrity culture and studies her in relation to many other stars: 18th-century actors and poets; 20th-century superstars like Elvis Presley, Marilyn Monroe, Muhammad Ali, and Princess Diana; present-day celebrities like Taylor Swift and Rihanna. What made you focus on Bernhardt?

SM: I’ve always been interested in Oscar Wilde, and I knew that long before he was put on trial and imprisoned for having sex with men, he became a celebrity precisely because he was so different from other men: he wore his hair long, sported velvet breeches, and gave lectures about the importance of beautiful home decor. I could understand why society punished him for being different, but it was more difficult to understand why so many people had for years before that celebrated his refusal to adhere to norms. That got me thinking about other people who became celebrities because they defied convention. I’d always been interested in Sarah Bernhardt – in fact it I can’t identify the moment when I first learned about her, it feels like I’ve always known who she was. Early in her career, when she complained about bad press coverage, a friend told her, “You will rise on a pillar of calumny.” That was the dynamic I set out to explore, and I found that many celebrities had followed the same pattern, even after live theater gave way to film and film gave way to the Internet. But I also found that calumny was only a piece of the puzzle: celebrities were also prized for their talents and merits.

Your book mentions that 19th-century celebrity culture was dominated by men, and that those men were deemed worthy of respect and admiration. Today, when society tends to associate celebrity with femininity, it has a more negative connotation. Why do you think that Sarah Bernhardt’s legacy holds up?

SM: If you open up a nineteenth-century book with “celebrities” in the title, you will find yourself reading about people known for their contributions to art, science, religion, war, and government. So almost all of them were men. The few female celebrities highlighted in those books were almost all performers: actors, singers, dancers. Acting was one of the few arenas where women could rise as high as men did. Sarah Bernhardt incurred a fair amount of disapproval for her ambition and independence, but the millions of people who admired her rarely worried that other women would follow in her footsteps – when they did entertain this idea, it was more of a joke than a real worry. Most nineteenth-century women lived such constrained lives that society had no reason to fear that masses of women would take female celebrities as role models.

In the twentieth century, the emphasis shifted from hailing celebrities as great men who had done great deeds to worrying about the passive, gullible masses worshipping false idols. As women began to make tangible political and economic gains, the number of female celebrities increased and the idea that ordinary women might imitate them became more plausible. Female stars became more influential – and, as a result, more threatening. Starting around the 1920s, it became very common for journalists to dismiss fans and celebrities alike as silly, empty-headed women. When the Beatles first visited the U.S. in 1964, the New York Times ran articles mocking them as having mostly female fans (which wasn’t actually true) and predicted that their success wouldn’t last long. The teenaged girls they sneered at proved to be the better critics.

As for whether Bernhardt’s legacy holds up: I hope my book helps us to recognize how important a figure she was.  There has been excellent scholarship on her merits as an actress and her innovative approach to publicity, but recent biographies have tended to focus, quite salaciously, on her sex life, often quoting very dubious sources. The nineteenth century was much more willing to acknowledge her merits. Many called her a genius, a word one rarely sees applied to women today.

In the age of Trump, a celebrity president, is the concept of celebrity tarnished beyond repair, or are we entering a new golden age of celebrity?

SM: There are many grounds on which to oppose Trump besides his celebrity, and many celebrities – Meryl Streep, Robert de Niro, Alyssa Milano, John Legend –have strongly opposed Trump. How people view celebrities varies with demographics and individual tastes. There has never been and never will be a golden age where all people admire all celebrities. Many Republican voters dismissed Obama as a celebrity in 2008 but had no problem with Trump’s celebrity in 2016. Older people who like to think of themselves as rational and cultivated often distance themselves from celebrity; the might be interested in Picasso or Einstein or Steve Jobs but would insist that these figures are not “mere” celebrities. Teenagers, especially working-class ones, have a more positive view of celebrity. They often care passionately about specific stars and when surveyed, many say that they aspire to become celebrities themselves.

Are there any contemporary celebrities that you see as having a long-lasting legacy like Bernhardt?

SM: It’s very hard to predict whose star won’t wane with time. Often the most popular celebrities of a given moment are the ones most likely to be forgotten, because they embody the present so completely. Will anyone be able to recognize a photo of Justin Bieber in 100 years? I wouldn’t bet on it. Even Sarah Bernhardt was much more of cultural reference point in the 1930s than she is today.  It’s interesting to look back at the 1950s and 1960s and see who has lasted from then. Marilyn Monroe, Audrey Hepburn, John Lennon, Muhammad Ali – all remain recognizable to millions.

Do you foresee celebrity culture changing dramatically over the next two hundred years, as the media landscape rapidly evolves?

SM: I’d answer that question by looking at the last two hundred years. Celebrity started out as a combination of print and live presence – a melding of newspapers, photographs, and in-person appearances. In the twentieth century, that gave way to film, radio, television. Now digital social media lead the way, though live performances remain important (that’s how most musicians make money, for example).

Through all those drastic changes, the underlying dynamic remained the same: celebrity has always been the result of unpredictable interactions between media, publics, and stars themselves, with no single one of those three groups exercising absolute power. So I’d predict that what would change celebrity drastically would be one of those groups losing power. If the press ceased to be free; if publics were violently forced to follow certain preferences; if stars were completely in the power of autocratic governments – any one of those changes would radically transform celebrity as we have known it.

Sharon Marcus is the Orlando Harriman Professor of English and Comparative Literature at Columbia University. She is a founding editor of Public Books and the author of the award-winning Between Women: Friendship, Desire, and Marriage in Victorian England (Princeton) and Apartment Stories: City and Home in Nineteenth-Century Paris and London.