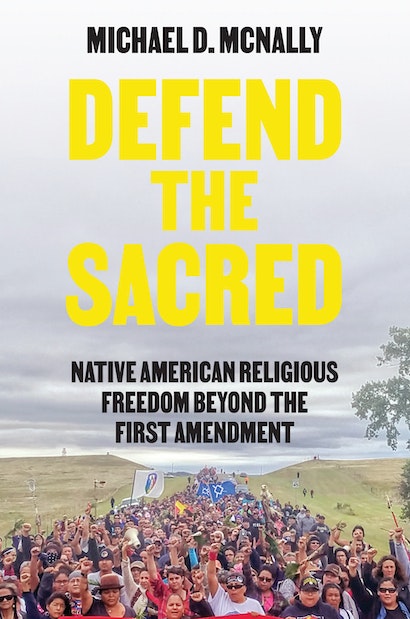 Defend the Sacred
Available in 3 editions
Buy This

In late March, more than three years after Standing Rock’s camps drew the nation’s attention to their campaign to “Defend the Sacred,” the tribe gained a clear court victory. Recently, a federal judge dealt a blow to the Dakota Access Pipeline’s crossing of the Missouri River one half mile upstream from the reservation boundary and ordered the Army Corps of Engineers to conduct a full-blown environmental impact statement.

This ruling came several years after oil began flowing through the completed pipeline, but it breathes new life into Native American efforts to defend sacred lands and waters throughout the country, even as the Trump administration had greenlighted the pipeline, sought to gut regulations designed to protect the environment and culturally significant places, and eviscerated Bears Ears National Monument in Utah by 85%.

Coverage of pipeline and public lands disputes tends to paint them as battles between environmentalists and Trump’s base; but as Defend the Sacred: Native American Religious Freedom beyond the First Amendment shows, they are also crucially about Native American assertions of presence and rights to practice ongoing traditional religions.

At Standing Rock, In the fall of 2016, the “Water Protector” camps objecting to the Dakota Access Pipeline’s crossing of the sacred Missouri River a half mile upstream from the reservation boundary captured the imagination of the nation and inspired broad swaths of the American public of the urgency and validity of Native claims to the sacred. Even more than protests that led President Obama to retract federal approval of the Keystone XL Pipeline (itself back in news), the Standing Rock camps stressed the Dakota Access Pipeline construction’s bulldozing of sacred sites and the water quality of the Missouri River as more than simply a matter of public health. The camps took place on federal lands that were never legally ceded to the US, at Sitting Bull’s traditional winter camp and at a confluence of waters that produced sacred stones in the swirling eddies of the Spring floods, at least before the 1950s when the U.S. Army Corps of Engineers completed the Oahe Dam and stopped up the free flowing waters—famously without the consent of the Standing Rock Sioux Tribe, whose choicest reservation lands, villages, cemeteries disappeared under water.

The courageous stand at Standing Rock to defend the sacred captured the whole country’s imagination in the court of public opinion, so why have their legal claims gained so little traction in the courts? The decision last March offered vindication of sorts, but it may have come too little and too late to stop the desecration. Why especially in the land that trumpets its deep commitment to religious liberty, and increasingly so, why have such legal claims gained so little?

An initial lawsuit to enjoin completion of the pipeline failed to persuade a federal judge that the Army Corps of Engineers, the permitting federal agency, had failed to adequately consult the Standing Rock Sioux Tribes in violation of the National Historic Preservation Act. And although the Obama Administration immediately halted completion of the pipeline at the Missouri River crossing and later, in the December before President Elect Trump took office, called for a fuller Environmental Impact Statement process, which must evaluate alternatives.

Days after taking office, Trump issued a memorandum removing the requirement of further environmental review and greenlighting the pipeline’s completion.  The Cheyenne River Sioux Tribe, the downstream neighbor joined in the lawsuit, challenging Trump’s action as a violation of religious freedom. Especially given the unlawful taking of the sacred Black Hills, the ritual contamination of sacred Missouri River water nullified traditional ceremonies, Cheyenne River argued. Even though courts have broadly rejected the notion that threats to sacred lands can trigger Native American religious freedom rights, Cheyenne River likened its citizens to prisoners whose religious exercise was coerced. Though a federal judge found no such religious freedom violation, he later ruled that the government revisit its streamlined environmental review, but allowed oil to continue to flow at the river crossing. Years later, the same judge drew on a new precedent, a 2019 appellate court ruling requiring a fuller environmental review for a powerline threatening historical sites sacred to national memory at Jamestown, VA (ironically where English settler colonialism began!) and ordered a full Environmental Impact Study for the Dakota Access pipeline, a process whose outcome remains uncertain this late in the game.

Meanwhile, the oil is flowing. Lots of it. And the pipeline company wants to double its capacity.

President Trump, after gutting 85% of Utah lands set aside Bears Ears National Monument, recently put up those lands at auction to uranium, oil, and gas exploration, and this in the midst of a lawsuit challenging his move. But this is hardly the environmental matter alone; Bears Ears has rightfully been called the first Native American National Monument. When President Obama set aside this stunning 23 million acres of Utah land in 2017, he was carrying out a plan by a coalition of Navajo, Hopi, Zuni, Ute, and Ute Mountain Ute nations to safeguard their sacred lands and the ancestral knowledge found in the land as a national treasure. And Bears Ears was to be collaboratively managed with the intertribal coalition.

Especially since courts have rejected any religious freedom rights to sacred lands, Bears Ears was a huge victory for Native peoples. Which may explain why Trump took aim in his first days in office. As for the court battle, the law may well be on the side of the tribes, for previous courts have yet to recognize a president’s authority the American Antiquities Act to drastically remove protections set in place by a predecessors. And the “local voices” of San Juan county commission that the Trump administration cited in its actions has reversed its opposition to the broader monument (a court ordered redistricting reallocated the gerrymandered seats on the commission to reflect the county’s Navajo majority). But the administration’s plan to promote extractive development of the lands in question, like the effort to get the oil flowing ASAP through a contested pipeline, is vexing.

In the face of such adversity, Native people only redouble their resolve. My book tracks how the legal and political efforts to defend the sacred are themselves generative of Native religions, sites of renewal and vitality, not fading traditions. And losses in court need not spell wholesale defeat. With tallies of the economic costs of the Dakota Access debacle mounting between $750 million and $7.5 billion (with social costs factored in), energy companies and government agencies now think twice before sidestepping forthright consultation with Native nations on matters that affect what they hold sacred.

Michael D. McNally is the John M. and Elizabeth W. Musser Professor of Religious Studies at Carleton College. He is author of three books on Native American religions, most recently Defend the Sacred: Native American Religious Freedom beyond the First Amendment.