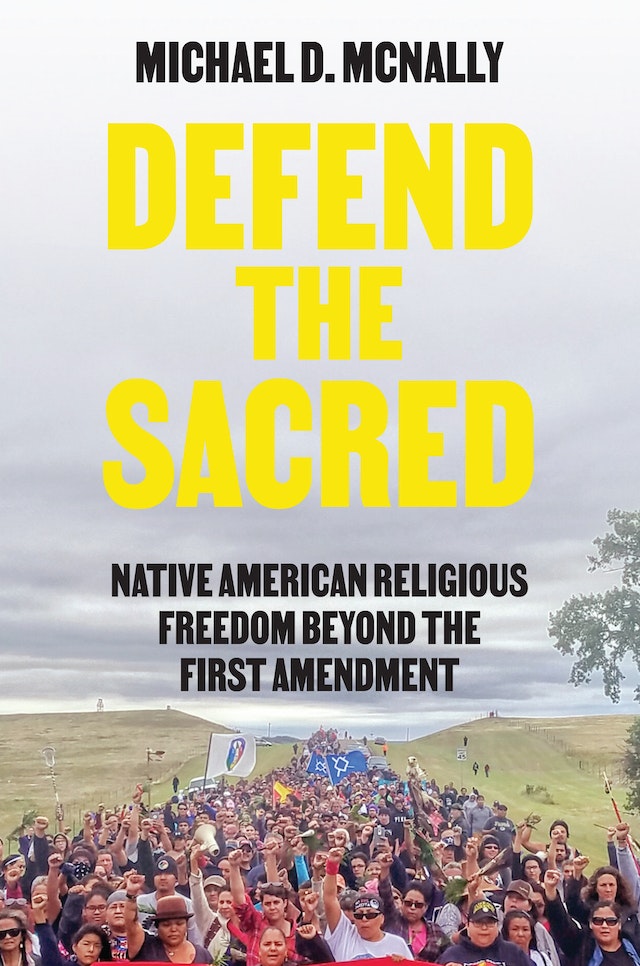 From North Dakota’s Standing Rock encampments to Arizona’s San Francisco Peaks, Native Americans have repeatedly asserted legal rights to religious freedom to protect their sacred places, practices, objects, knowledge, and ancestral remains. But these claims have met with little success in court because Native American communal traditions don’t fit easily into modern Western definitions of religion. In Defend the Sacred, Michael McNally explores how, in response to this situation, Native peoples have creatively turned to other legal means to safeguard what matters to them.

To articulate their claims, Native peoples have resourcefully used the languages of cultural resources under environmental and historic preservation law; of sovereignty under treaty-based federal Indian law; and, increasingly, of Indigenous rights under international human rights law. Along the way, Native nations still draw on the rhetorical power of religious freedom to gain legislative and regulatory successes beyond the First Amendment.

The story of Native American advocates and their struggle to protect their liberties, Defend the Sacred casts new light on discussions of religious freedom, cultural resource management, and the vitality of Indigenous religions today.

Michael D. McNally is the John M. and Elizabeth W. Musser Professor of Religious Studies at Carleton College. He is the author of Honoring Elders: Aging, Authority, and Ojibwe Religion and Ojibwe Singers: Hymns, Grief, and a Native Culture in Motion.

"This book tells the story of Native Peoples' urgent and complex struggle for religious and cultural freedoms. Michael McNally stands witness to our urgency about protecting sacred places, defending ancestors, and continuing traditional ways, especially those in danger of desecration and harm. He traces and makes understandable the complex legal barriers that impede our free exercise of traditional religions and the maze of laws we stitch together for current protections and future possibilities. I urge activists, advocates, allies, policymakers, judges, lawyers, and traditional practitioners to read this book."—Suzan Shown Harjo (Cheyenne & Hodulgee Muscogee), President, The Morning Star Institute

"Defend the Sacred is a very readable history of the collisions between the U.S. Constitution and Native American religious freedom. McNally demonstrates in compelling fashion that U.S. law protects other Americans better than it protects Native Americans, even when it comes to America's most fundamental values."—Kevin K. Washburn, Dean, University of Iowa College of Law

"Defend the Sacred is a pathbreaking work of scholarship that sets a new standard and has the potential to impact public debates around Native American religious freedom."—Tisa Wenger, Yale University

"How best to protect Native American religious freedoms? From ritual feathers and prison religion to sacred land, Michael McNally shows how and where fragile protections are delivered and where they are stultified. His analysis is as keen as it is wide ranging. As a scholar of religion with a long track record of direct engagement with the worlds of law, McNally is uniquely qualified to tell this important story."—Greg Johnson, University of California, Santa Barbara

"An important book on Native American activism from a scholar of religion who has also delved deeply into law and Native history and social life."—Sally Engle Merry, New York University