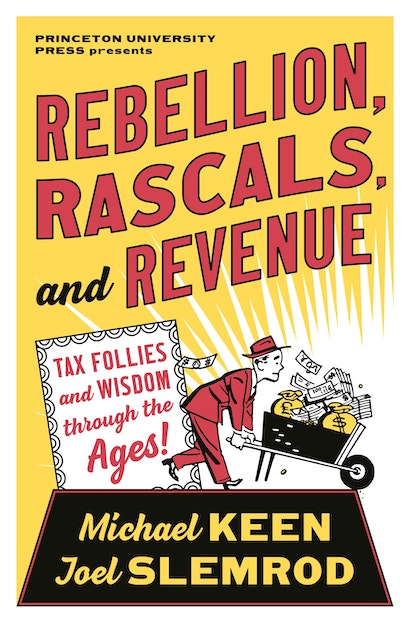 Rebellion, Rascals, and Revenue
Available in 3 editions
Buy This

There is no bloodshed in our last story, but it takes us to the heart of the tax-design problem. This is the tale of the window tax, imposed in Britain from 16971 to 1851. At first blush, taxing windows may seem anachronistic or just plain folly. But it was actually pretty clever.

The problem faced by the government of the time was to find a tax based on something that: increased with wealth (for fairness); was easily verified (to avoid disputes); and—being intended to replace a tax on hearths (that is, fireplaces), much hated for requiring inspectors to check inside the property, imposed by the recently deposed Stuarts—observable from afar. The answer: windows.

The number of windows in a house was a decent proxy for the grandeur and wealth of its occupants, so that on average, wealthier people would owe more window tax. And it could be assessed from outside by “window peepers.”2 In an age that lacked Zillow.com or any other way to estimate on a large scale and with reasonable accuracy the value of residential property, this tax was not such a bad idea. Indeed, a window tax is essentially a (very) simple version of the computer-assisted mass appraisal systems by which some developing countries now assess property tax, valuing each house by applying a mathematical formula to a range of relatively easily observed characteristics (location, size, and so on).3

Clever though the window tax idea was, it had limitations of a kind that pervade other taxes as well. It was not, for instance, a very precise proxy. That led to unfairness. Adam Smith was irked that:

A house of ten pounds rent in a country town may sometimes have more windows than a house of five hundred pounds rent in London; and though the inhabitant of the former is likely to be a much poorer man than that of the latter, yet so far as his contribution is regulated by the window-tax, he must contribute more to the support of the state.4

And even though the tax only applied to properties with more than a certain number of windows, which went some way toward easing the burden on the poorest families, the tenement buildings into which the urban poor were crowding counted as single units for the purposes of the tax, and so were usually not exempt from tax.

The window tax also encountered the difficulty that it induced changes in behavior by which taxpayers reduced how much they owed, but only at the expense of suffering some new harm. The obvious incentive created by the tax was to have fewer windows, if need be by bricking up existing ones, as remains quaintly visible to this day on distinguished old properties (and some undistinguished ones). Light and air were lost. The French economist and businessman Jean-Baptiste Say (1767–1832) experienced this response first-hand when a bricklayer came to his house to brick up a window so as to reduce his tax liability. He said this led to jouissance de moins (enjoyment of less) while yielding nothing to the Treasury, which is a felicitous definition of “excess burden”:5 the idea—one of the most central and hardest to grasp in thinking about taxation—is that the loss which taxpayers suffer due to a tax is actually greater than the amount of tax itself. Excess burden is the collateral damage of taxation, and we will take a close look at it in chapter 9.

The harm done by vanished windows was not trivial. Poor ventilation spread disease; lack of light led to a deficiency of vitamin B that stunted growth—what the French came to call the “British sickness.” Opponents reviled the tax as one on “the light of heaven”; the medical press protested that it was a “tax on health.”6 Philanthropic societies hired architects to design accommodation for the poor so as to reduce liability to the window tax,7 and great minds of the time railed against it. Benjamin Franklin, when Minister to France, may have had it in mind when in 1784 he wrote to the editor of the Journal of Paris musing on the benefits of natural light. Among his recommendations (ironic, we presume) was ringing church bells and/or firing cannons at sunrise to wake everyone up. (For our narrative, though, more noteworthy was Franklin’s proposal for what is effectively the precise opposite of the window tax: a tax “on every window that is provided with shutters to keep out the light of the sun.”)8 Charles Dickens was straight up irate:

The adage “free as air” has become obsolete by Act of Parliament. Neither air nor light have been free since the imposition of the window-tax . . . and the poor who cannot afford the expense are stinted in two of the most urgent necessities of life.9

France followed the British example, adopting a tax on windows (adding an equally hated tax on doors) in 1798, leading the saintly Bishop of Digne of Les Misérables to pity “the poor families, old women and young children, living in those hovels, the fevers and other maladies! God gives air to mankind and the law sells it.”10

At the other end of the scale, the super-rich might revel in the ostentation of their windows. When, in Jane Austen’s Pride and Prejudice, the unctuous Mr. Collins proudly displays the magnificent property of his patrons to Elizabeth Bennett, she “could not be in such raptures as Mr. Collins expected the scene to inspire, and was but slightly affected by his enumeration of the windows in front of the house, and his relation of what the glazing altogether had originally cost Sir Lewis de Bourgh.”11 Because people preferred to both keep their windows and pay less tax, the response to the window tax, as with most taxes, was largely a story of evasion and avoidance, disputes, and legislative change trying to clarify the tax rules about what was and was not subject to tax. When visitors today take a punting outing on the River Cam in Cambridge, the guide may point out a house on the bank with a window on the corner of the building, supposedly designed to let light into two adjacent rooms that counted as just one window for purposes of the tax. The government caught on to that trick, however, and in 1747 introduced legislation stipulating that windows lighting more than one room were to be charged per room.12 A less subtle ploy was to hoodwink the window peepers by temporarily blocking windows “with loose Bricks or Boards, which may be removed at Pleasure or with Mud, Cow-dung, Moarter, and Reeds, on the Outside, which are soon washed off with Shower of Rain, or with paper and Plateboard on the Inside.”13 In response, the same 1747 law also required that no window that had been blocked up previously could be unblocked without informing the surveyor, with heavy fines for violation.

Disputes, favoritism, and upset abounded. What exactly, for instance, is a window? Questions with seemingly obvious answers can get murky when lots of (tax) money is involved. The wording of the act seemed to imply that any hole in an exterior wall, even from a missing brick, was a taxable window.14 The rules did become clearer (or at least more complex) over time; the 1747 reform, for instance, clarified that when two or more panes were combined in one frame, they counted as distinct windows if the partition between them was more than 12 inches wide. In any case, the tax commissions, consisting of local gentlemen, tended to apply the tax much as they wanted. This practice created many opportunities for favoritism. John Wesley, founder of Methodism, complained about an acquaintance with 100 windows paying only for 20.15

The window tax was very imperfect. But it was not a folly. And it illustrates the key challenges that are at the heart of the tax-design problem: the quest for tolerable fairness, the wasteful behavioral responses that the tax induces, and the desire to administer a tax cost effectively and nonintrusively. These challenges are taken up in turn in later chapters of this book. Many governments, as we will see, have done far worse that the window-taxers did.

This selection is an excerpt from Rebellion, Rascals, and Revenue: Tax Follies and Wisdom through the Ages by Michael Keen and Joel Slemrod.

Michael Keen, former deputy director of fiscal affairs at the International Monetary Fund, is Ushioda Fellow at Tokyo College, University of Tokyo. Joel Slemrod is the David Bradford Distinguished University Professor and the Paul W. McCracken Professor of Business Economics and Public Policy at the University of Michigan. They have both received the National Tax Association’s Holland Medal for their lifetime contributions, and both are former presidents of the International Institute of Public Finance.

1. The window tax never took hold in North America. In Charles Dickens’s Martin Chuzzlewit, set in 1840s America, a local boasts to Martin and the companionable Brit Mark Tapley: “No window dues here, sir.” “And no windows to put ’em on,” Mark replies. The tax applied in Scotland only from 1748, and in Ireland only from 1799.

2. Hughes and White (1991). The term is dismissive. But over time, improvements in the administration of the window tax, including the assertion of central control over the exercise of discretion (legal or not) by local elites ultimately responsible for assessment and appeals, were key to the emergence of a disinterested and professional tax administration capable of implementing the income tax; see Ward (1952).

11. Austen (1906, p. 244). The lasting architectural consequences of the window tax are described in Glantz (2008), including current examples of using false bricked-up windows to liven up bare exterior walls.