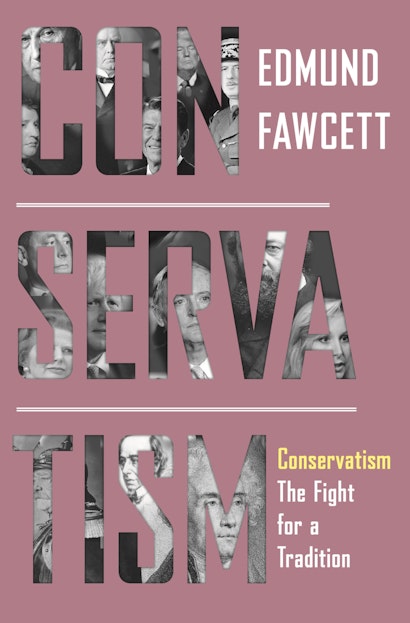 Conservatism
Available in 4 editions
Buy This

The political era through which Americans and Europeans are living is dominated at present by the right. But which right is that? It is not easy to say. For conservatives are at war with each other. Not for the first time, they are fighting over who it is that speaks for their tradition. On one side, tired but not yet beaten, is an older, more liberal-minded conservatism, reconciled to working at the political centre. Facing it on the other side is an energised hard right, a strange but powerful hybrid of national-first populists and market-minded globalists. The hard right has French and German champions, too, but its best known faces are Donald Trump in the United States and Boris Johnson in Britain.

As is any large struggle of ideas, each side claims to represent the true faith and denounces the other as apostates. Centrists look on the hard right as a perversion that betrays the label “conservative.” To the  hard right, centrists are an exhausted remnant that has ceased to speak for “the people” and treacherously sided instead with the true right’s main enemy, the “liberal elite.”

Eloquent defenders of an earlier conservatism now shudder at the hard right’s capture of the Republican party in the United States and the Tory party in Britain. The conservative columnist Bret Stephens wrote recently in the New York Times, that “the only way the Republican Party can again become a vehicle for conservative ideas is if Trump is trounced. Populists and philosophical conservatives may sometimes travel a common road, but they are heading now in different directions.” In similar spirit of alarm the British historian Max Hastings, a conservative by temperament, cited in the London Times, the judgment of his “wisest old friend”: “We must never allow ourselves to be lulled into thinking that what is happening is normal; that it represents the usual give-and-take of democratic politics. It does not. It is strange and new and bad … Johnson and Cummings [his close aide] rule from the Trump playbook.”

It is tempting, especially for those who aim to look at politics in greater calm through a longer lens—political scientists or political philosophers, for example—to treat such conflicts as ordinary factionalism with perhaps the volume turned up more than we have grown used to. Or as a shuffling of slippery and ill-defined labels—“conservative,” “liberal,” “hard right”—that  obscure deeper social and political patterns. A further distraction here is the outsize character of Trump and Johnson themselves. As if maddened by their showmanship, political observers can too easily over-personalise and forget what else is happening on the political right.

Although each of those correctives is fair enough, clearly something big is happening in Western politics that none of us fully understand or can see the end of. Political science, political philosophy and political commentary are each needed to chart a way out of our puzzlement, but they are not enough on their, even together, without a historical view. To grasp what is happening on the right, we need to go backwards in two steps to see where it has come from.

The first step is to take in the upheavals in Western society over the past 30–40 years. Structural changes in society, new cultural attitudes, the break-up of the post-1945 geopolitical frame and economic globalisation have reshaped the West’s old left-right political contest. Intellectually and electorally, the traditional 20th-century left is in headlong retreat. Since the right now occupies much of the political field, the main contest is within the right itself.

The second historical step back is to the roots of conservatism itself in the right’s 19th-century confrontation with liberalism and democracy. Conservatism began as a movement of resistance to liberal capitalism and popular democracy, two restless, unstoppable agents of change. In defence of property and social order, however, conservatives soon made tactical accommodations with both. So successful was the right in this that it gradually absorbed and tamed its original rivals.

Puzzling as it sounds, conservatism’s ultimate reward for compromising with liberal democracy was domination of liberal democracy. At the same time, conservative yearning for stability and boundaries amid the ceaseless upheaval of capitalist modernity never went away. That conflict provides the historical red thread in my history of the political right, Conservatism: The Fight for a Tradition. Told in four parts beginning in the early 19th century, it ties together the party-political and intellectual stories of the political right in four countries that form liberal democracy’s representative but non-exclusive core, France, Britain, Germany and the United States.

In some ground-floor sense, conservatism speaks to a universal human desire for everyday order and stability—for tomorrow to be like today. At the same time, conservatism cannot fail to champion capitalism, a great engine of material progress that restlessly turns society, lives and outlooks upside down and is forever inventing new tomorrows. Conservatives, that is, have always faced two ways, promising stability and upheaval, continuity and disruption. The tensions, difficulties, everything that makes the conservative story interesting, comes back to that basic conflict. The content of the conflict changes, but its defining character remains the same.

That conclusion is not in itself reassuring. The right’s script is indeed old, but it is being played out now in daunting, unfamiliar circumstances. In handling the tensions that define it, the right through history has met success but also catastrophe.