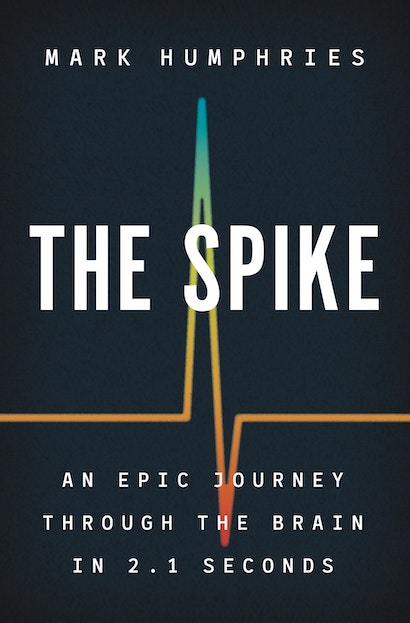 The Spike
Available in 4 editions
Buy This

But it will receive distant echoes of all these things. It will put them together to make a picture of the world for you. The loneliest neurons know all.

Yet no part of the brain exists in isolation from the rest. It is all one giant connected system. Like my headphone cable (seriously, where is the end of this knot?). So where do the loneliest neurons send their pictures of the world? They tell us that perhaps the biggest question in neuroscience is:

Why doesn’t every neuron know about everything?

Take seeing. At the back of our retinas is a complex circuit, from the photoreceptors that ping when a photon hits them, that tickle multiple layers of neurons into life, who then spit their signal out to the rest of the brain (wired backwards, with the neurons sitting in front of the photoreceptors, like trying to watch a TV with the wires hanging in front of the screen). Immediately, the signal splits, some going up to the first “visual’’ cortex, some down to the brainstem. From these first way-stations, the signal travels onward, deeper into cortex, deeper into the brain. As we charge forward from your retina, we move deep into your brain, from neuron to neuron to neuron.

Take reaching for your phone. Your arm and shoulder muscles variously contract and relax to move your hand from where it was to where your phone is. Neurons in your spinal cord connect directly to these muscles; firing these neurons contracts the muscle. Behind those neurons are other neurons in your spinal cord; further behind them, the neurons in your brain stem and motor cortex. As we pull back from the muscles, we move up and through your brain, from neuron to neuron to neuron.

Yes it does. The loneliest neurons may well be somewhere in the darkest corner of the prefrontal cortex—say, the infralimbic—many steps removed from the regions of cortex that get direct input from the senses or talk down to the neurons in the spinal cord. Yet neural activity in prefrontal cortex seems to know about everything. Neurons there can change their activity according to the past (memory) and the future (upcoming decisions); to the colour and motion of objects in the world; to where the animal is right now. Some, perhaps most, of the neurons in prefrontal cortex even respond to combinations of these things.

Or the loneliest neurons may well be in the obliquely obscure globus pallidus—a pale globe of neurons, tucked underneath the striatum, reaching their tendrils into all the other nuclei of the basal ganglia. Far, far from the senses and motion. Yet neurons here have different activity according to how the arm is about to moved; and respond differently to when a reward is delivered to when it is not.

Wherever they are, when we record activity from the loneliest neurons, we indeed see they respond to both sensory and motor events, to both the past and future.

On the face of it, the loneliest neurons fit well with our ancient, back-of-an-envelope idea that your brain is divided into roughly three chunks: sensory systems that bring information in; motor systems that make stuff happen; and “association’’ bits knitting the two together. The kind of world view we teach medics in their neuroanatomy classes. (The examiner strides into the anatomy theatre and sticks a little flag in a random bit of pickled grey matter, twirls around, and barks at the class: “what is that, and what does it do?” Class mumbles something about motor cortex and limb control. Actual answer: we have less idea than a teapot has about calculus; but medics aren’t allowed to admit that).

But the loneliest neuron tells us this division is deeply wrong. For once we move into the brain proper, away from the senses and their special neurons, there is no neuron that is not connected eventually to every other. We can take any neuron at random and after jumping the connections from that neuron to the next and to the next and on, ever onwards, we can end up at any other neuron in the brain. We can trace a path from any sense to any neuron; from any neuron to any muscle.

We can get from the loneliest neuron to any other neuron. We can get back to the neurons in that first bit of cortex that sees; down to the neurons in the spinal cord. If we can trace a path from the spinal cord to visual cortex; from the eye to motor cortex; from prefrontal cortex to, well, bloody everywhere—then shouldn’t we see that the activity of neurons everywhere is related to everything?

We have been stymied here because we interpret our recordings of the brain based on our ancient three-part chunking of the brain. We look for sensory responses in neurons within the designated sensory system; for activity that precedes moving in neurons within the designated motor system; and for complex combinations of stuff, bridging the past to the future, in the activity of neurons in the association system. We don’t typically look for motor responses in sensory regions, and vice-versa. Because, well, the textbook didn’t mention it.

But as recording technology progresses, so we have happened by accident to record from more and more areas outside “classical” ones. And as lab technology progresses, so we have started to put animals in virtual worlds where they can run and see and touch at the same time all while we record lots of neurons from their brains. And we notice things. Weird things. Very recently, we have seen that walking changes activity in the primary visual cortex; that activity there is also changed by expected reward; we have seen activity about the error made in predicting reward in the defiantly motor-system cerebellum; we have seen movement controlled by the defiantly reward-system dopamine neurons. These are all strong hints that, yes, signals go everywhere, come from everywhere.

More is to come. Much more. We are about to enter an era where labs routinely record from many different levels of the brain at once. Not just cortex, or just the globus pallidus, or just wherever; but across bits of the forebrain, midbrain and hindbrain at the same time. So these labs will have recordings from the bit of the brain most interesting to that lab; and by happenstance from many other bits of the brain too.

And we will find that most regions we record from will have neurons that activate specifically to the thing we are making happen (flashing a light, playing a sound), or that the animal is doing (licking, running, turning etc). Not just where we used to look, but everywhere, and at approximately the same time. I think these recordings will force us to think deeply about what we mean by “neural coding”.

Perhaps we have the basic questions of neural coding all wrong. Perhaps we should not ask whether each neuron represents one particular thing. If this particular neuron knows about that light flash. Or this one knows you’re about to kick a football (badly, then fall over). Or this neuron knows about the cream cake you stashed in the back of the fridge, cunningly obscured by the pumpkin you’ve placed in there because that’s not obviously hiding something, no. For if we can trace a path from every neuron to every other, and if we are getting glimpses of neurons everywhere responding to stuff we never thought they knew about, then perhaps the question should be: why do many neurons seem not to respond to everything. What compartmentalises information in the brain?

Two mechanisms spring to mind; undoubtedly there are others. One is that the chain of steps from neuron to neuron ends in neuromodulation. Dopamine neurons are jumpy little bastards, pinging off activity every time something remotely surprising happens. They release dopamine over a wide volume of the brain, where it does not directly trigger more activity. Rather, it raises or lowers how much another neuron responds to its inputs (it modulates the neuron); it may also control whether or not the inputs to that neuron change in strength. So the information contained in the activity of dopamine neurons is not directly transmitted, but is instead used to gate the activity of other neurons. Other neuromodulators, like serotonin, work the same way.

Another mechanism is that the chain of steps from neuron to neuron ends in a brain structure that specialises in inhibition. So instead of passing a signal on, the neurons in this part of the brain invert it, turn it into inhibition, so that more of that signal is turned into less signal in their targets. Or, more succinctly, the inhibition is what compartmentalises information, by preventing its appearance elsewhere. The “its on a need to know basis and you don’t need to know, mate” signal.

Loneliest neuron
At the crossroads of my mind
What are you thinking?

We have good reasons to believe that brains—complex brains at least—build a model of the world. That the activity of neurons represents the brain’s current best guess at what is happening outside, the brain’s prediction of the current state of the world. One reason we think the brain is doing prediction is that the sheer quantity of sensory and movement information available to a brain at any moment in time is too vast to be used. So instead it is sampled, and that sampling is used to update the predictions when they do not match what the samples say.

(A classic example of the brain building a model is your blind spot: the bit of the retina that has no receptors because it’s where your optic nerve leaves the retina to go talk to the rest of the brain. Yet you can see the bit of the world that your blind spot is pointing at, from a combination of the brain extrapolating from what the surrounding receptors can “see” and from what the other eye can see in that region of space. Yes, really: take the test)

A compartmentalised view of the brain implies that this model of the world is fed by separate streams of information. That there is a stream of information from your eyes, coming via the visual parts of cortex. Another stream from your ears, via your auditory cortex. Another from your skin, your touch, via your somatosensory cortex. And so on. If this were the case, then the loneliest neurons would be where these streams converge. They would be the Keepers of The Model.

And then somehow they would send their predictions back down the streams, separated: “you, vision—this is what will happen to eyes shortly”. Are there really separate models for sight in visual cortex, and for sound in auditory cortex, and for walking in, er, somewhere?

For if sight knows about sound, and sound knows about turning, and arm-moving knows about sight, then it makes it a damn sight easier to pick up the boiling hot cup of tea your mum placed on the table next to you without scalding yourself silly. And for that we can all be thankful.

This essay was originally published on Medium.

Mark Humphries is Chair in Computational Neuroscience at the University of Nottingham. He is the founding editor of The Spike, a Medium online publication. He lives in Sheffield, England. Twitter @markdhumphries