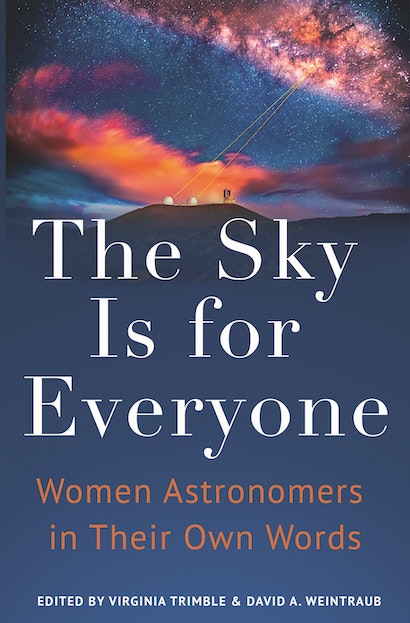 The Sky Is for Everyone
Available in 3 editions
Buy This

The Sky Is for Everyone is an internationally diverse collection of autobiographical essays by women who broke down barriers and changed the face of modern astronomy. Virginia Trimble and David Weintraub vividly describe how, before 1900, a woman who wanted to study the stars had to have a father, brother, or husband to provide entry, and how the considerable intellectual skills of women astronomers were still not enough to enable them to pry open doors of opportunity for much of the twentieth century. After decades of difficult struggles, women are closer to equality in astronomy than ever before. Trimble and Weintraub bring together the stories of the tough and determined women who flung the doors wide open. Taking readers from 1960 to today, this triumphant anthology serves as an inspiration to current and future generations of women scientists while giving voice to the history of a transformative era in astronomy.

VT: David, why did you choose to write this book on the history of women in astronomy?

DW: I wanted to write this book because, as Bob Dylan, reminded us, “the times they are a-changin’.” This book is an attempt to record and preserve the history of an important era of social change in the history of astronomy, beginning roughly in the mid-twentieth century and ongoing today. Before the 1970s, very few graduate programs in astronomy offered admission to women, very few major observatories accepted proposals from women, very few telescope were open for use by women, and very few universities hired women onto their faculties. This was true globally.  Over half a century, all of that changed. We need to know about, remember, and celebrate the courage of the women who made these changes happen. We also need to understand, from the perspectives of women entering the field of astronomy in more recent decades, about what professional life as a woman in astronomy is like now. This book, I hope, will also inspire another generation of scientists, especially young women who aspire to careers in astronomy, to follow in the footsteps.

DW: Virginia, how did you get involved in this project?

VT: Well, you asked me, and women are generally socialized to agree to do what they are asked.  But also it sounded like fun (and it has been) – a chance to connect up with some old friends, make some new ones, and find how things have changed over the past 50 years or so.

DW: I felt, deeply, that the stories of these women should be told by them, not by us or any other biographer. These are their stories and so these stories needed to be told as seen through their eyes in their words.  For this reason, many women whose stories should be told – e.g., E. Margaret Burbidge, Helen Sawyer Hogg, Cecelia Payne-Gaposhkin, Nancy Grace Roman, Vera Rubin, Giusa Cayrel de Strobel, Beatrice Tinsley – are absent from these pages.

DW: You expanded our list of possible writers to be invited far beyond my starter list. How did you go about doing this?

VT: I had in mind filling in some national gaps (India, China, Japan, and others) – this worked well.  I also wanted to fill in some gender gaps (LGBQ+, trans, non-binary) – on this I, well maybe both of us, pretty much failed – and ethnic/racial gaps —– here we were partially successful.

DW: In the end, we extended invitations to 49 women, covering a broad range of ages, countries of origin, education and career, areas of astrophysical expertise, and including as many of the most celebrated and accomplished women of the past half century.  We know that the stories of more than a few, extremely deserving women were left out.  We deeply regret that. But financial issues constrained the ultimate size of the book.  We hoped to have as many as 30 chapters, each of 3,000 words.  We ended up with 37 chapters (not including our own introductory and closing chapters), each of, on-average, about 3,500 words.  We are grateful to our publisher for recognizing the importance of letting each of storyteller be relatively unconstrained in telling her story in as many words as necessary (within limits!) and to not force us to turn down the stories of any of the women who agreed to participate in this adventure.

DW: Why do you think many agreed to write, and some didn’t?

VT: When I was asked by the PUP folks for a sample chapter, I just sat down at my typewriter (yes, really) and wrote it in an afternoon. Writing a story about myself was fun and easy, and we related my experience to our invitees. A few of our authors must have felt (based on their stories) the same way - “I know about myself; it’s fun to talk about myself; no big deal.”  Others have said that they found it painful, or cathartic, or sometimes both, to ‘revisit’ their earlier years and what it took to emerge a success by almost any standard. Of the non-writers, a few apologized for being too busy or being committed to some other autobiographical projects. A few said they would try but missed all possible deadlines. And a few must have thought we were nuts and never even answered.

DW: We think this book represents a special opportunity for each and every writer.  For some, it was an opportunity to add to their legacy; for others, it was a chance to tell their stories for the first time. For all our writers, their chapters are opportunities to help preserve a part of history that they all agreed should be preserved. And because they just happened to be among the few who lived that history and often shaped that history, some of them likely felt an obligation to help us create a record of that history. We’re honored that they did so.  For more than a few writers, but by no means all, writing was painful. We know this because they told us.  These women relived, by relating their histories to our readers, some painful experiences. We are grateful to them for their courage, both in persevering in our profession and in writing their chapters.

VT: Why would anyone want to read this book?

DW: History needs to be known and not forgotten. The paths opened up by many of these women in the 1960s, 1970s, 1980s, and 1990s are only part of the change that needs to happen in order to bring equal opportunity in astronomy to all.  The frontiers for change, today, are different, but those who are working now to increase the opportunities for people of color, for gays, lesbians and gender queers, for people from countries not historically at the vanguard of professional astronomy, and even, still, for women can both learn and be inspired by these stories.  Of course, many readers will simply be thrilled to learn about the accomplishments of and contributions to our knowledge of the astrophysical universe made by 37 brilliant astronomers; they just happen to be women.

VT: Well the index has hundreds of names, not all women and not all are astronomers, so the first thing new readers might do is check to see whether their own names that of people they are interested in learning about are there.  Next, especially for our fellow astronomers, look for your friends, former mentors, places to which you feel an attachment, or the opposite, and so forth.

VT: What do you plan to do for an encore?

DW: Volume 2, in which we could include some ‘missing persons,’ would be a start. In addition, those with the skills to do so might write biographies of some of the women no longer with us whom we mention in Chapters 1 and 39 and whose stories are not yet told.

DW: What do you think should come next?

VT: I’m interested – and perhaps others are also – in statistical and demographic analysis based on the data here, in the individual chapters and in the introductory and concluding material.  What do these women have in common?  Do/did they differ from their contemporaries in identifiable ways?  What comparisons can be made with (a) women who have succeeded in other fields and (b) men in astronomy.

Virginia Trimble is professor of physics and astronomy at the University of California, Irvine. An award-winning astronomer, she earned her PhD at Caltech in 1968, when some leading universities did not admit women. David A. Weintraub is professor of astronomy, history, and the communication of science and technology at Vanderbilt University. His books include Life on Mars: What to Know Before We Go (Princeton).