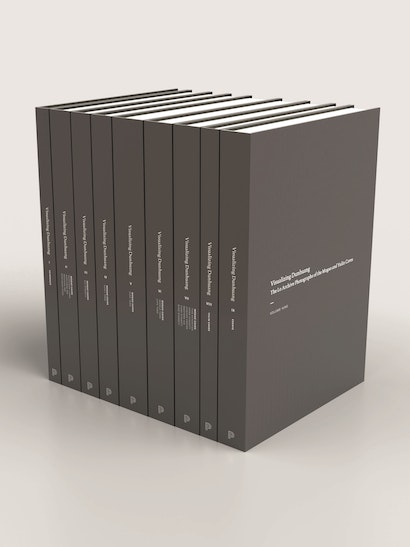 Situated at an important juncture within the network of silk routes from China through central Asia, the oasis city of Dunhuang was an ancient site of Buddhist religious activity. Southeast of the city, the Mogao Caves, also known as the Caves of the Thousand Buddhas, are an astonishing group of hundreds of caves—carved in the cliffs between the fourth and fourteenth centuries—containing sculptures and paintings. Further east sit the Yulin Caves, another critical and richly decorated site. Featuring some of the finest examples of Buddhist imagery to be found anywhere in the world, these caves have enticed explorers, archaeologists, artists, scholars, and photographers since the early twentieth century.

Visualizing Dunhuang: The Lo Archive Photographs of the Mogao and Yulin Caves presents for the first time in print the comprehensive photographic archive—created in the 1940s by James C. M. Lo (1902–1987) and his wife, Lucy L. Lo (b. 1920)—of the remarkable Buddhist caves at Dunhuang. This extraordinary nine-volume set features more than 3,000 of the original black-and-white photographs that provide an indispensable historical record. Invaluable for their documentary worth and artistic quality, and thorough in their coverage and clarity, the images represent a rare perspective on significant monuments, many now irretrievably changed. The Lo Archive serves as a treasure trove of historical, cultural, and artistic information for researchers, art historians, and conservators.

Exquisitely produced, this monumental set’s abundant photographs have been lavishly printed as tritones, allowing for the closest possible match to James Lo’s original black-and-white photographs, and for the clearest, richest images possible. With numerous silk-screened pages and an eight-page double-sided gatefold, Visualizing Dunhuang stands as a definitive reference for scholars, collectors, and libraries in art history and Asian studies.

Published in association with the Tang Center for East Asian Art, Princeton University