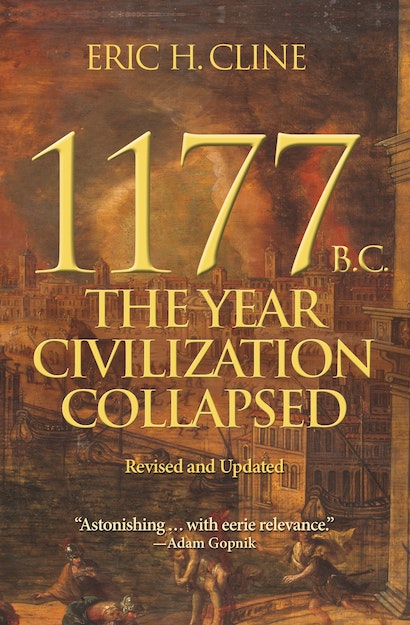 This month’s Book Club Pick is Eric Cline’s bestselling book, 1177 B.C.: The Year Civilization Collapsed. As we head into summer, this bold and breathtaking book is a terrific book club choice and it is sure to lead to lively discussion. In 1177 B.C., marauding groups known only as the “Sea Peoples” invaded Egypt. The pharaoh’s army and navy defeated them, but the victory so weakened Egypt that it soon slid into decline, as did most of the surrounding civilizations. Cline tells the gripping story of how the end was brought about by multiple interconnected failures, ranging from invasion and revolt to earthquakes, drought, famine, and the cutting of international trade routes. Bringing to life a vibrant multicultural world, he draws a sweeping panorama of the empires of the age and shows that it may have been their very interdependence that hastened their dramatic collapse. Recently revised and updated, 1177 B.C. sheds light on the complex ties that gave rise to, and eventually destroyed, the flourishing civilizations of the Late Bronze Age—and set the stage for the emergence of classical Greece and, ultimately, our world today. Writing in the pages of the New Yorker, Adam Gopnik noted, “The memorable thing about Cline’s book is the strangely recognizable picture he paints of this very faraway time.” 1177 B.C. is an ideal pick for readers who are interested in ancient history; it is packed with detail, reads like a mystery, and is unputdownable.

Eric H. Cline is professor of classics and anthropology and director of the Capitol Archaeological Institute at George Washington University. An active archaeologist, he has excavated and surveyed in Greece, Crete, Cyprus, Egypt, Israel, and Jordan. His many books include From Eden to Exile: Unraveling the Mysteries of the Bible and The Trojan War: A Very Short Introduction. Twitter @digkabri