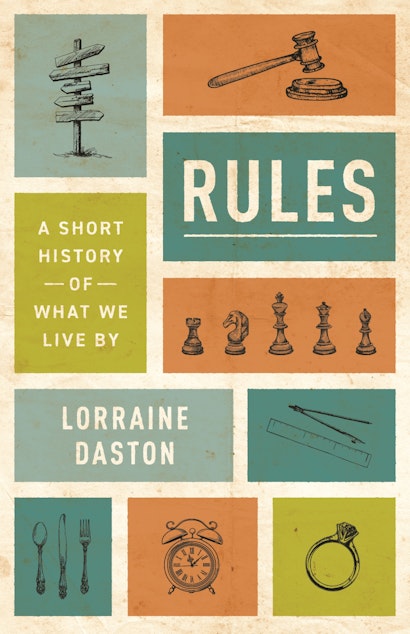 Rules
Available in 2 editions
Buy This

Rules: there are so many of them, and all so very various. Rules for where to place that third fork in a formal table setting, rules for when to clap at concerts, rules for deciding who has the right of way at an intersection, rules for how to play games, rules for declaring taxable income, rules for how to greet friends—a firm handshake (Germany), alternating pecks on the cheek (France), a bow and clasped hands (India), or a hug (the U.S.). That last example not only highlights how different cultures make different rules; it reminds all of us of how such rules can crumble in a sudden emergency like a pandemic, only for new ones to be invented to fill the void: remember the elbow bump? And as the experience of the past two years has taught us, rules can sometimes seem like the guardrails that keep us safe and sometimes like an exasperating swarm of mosquitoes buzzing around our heads. When rules come fast and furious and change weekly—why and where and when to wear a mask? sanitize the groceries or not? Send the kids to school or keep them home?—the stable ground beneath our feet seems to quake. We can’t live without rules, but we complain endlessly about the ones we have.

The specifics of rules are notoriously diverse. In some cultures and epochs, it’s the rule for a host to offer guests whatever household item they may admire; in others for the guests to shower their hosts with gifts. Some cultures drive on the right, others on the left. But there is no known culture without rules, both implicit and explicit. Rules distill the essence of cultures, crystallizing shared values and approved ways of doing things. Almost all rules choreograph the conduct of people doing things together, from the rites of birth and death to what to wear to a wedding. When individuals make rules for themselves (“Read a poem every day.” “Don’t snack between meals.”), it is to import public order into disorderly private lives: the single self divides in two, the rule-maker and the rule-follower (and, all too often, the rule-breaker). If rules are a cultural universal, it’s because cultures need rules to define themselves, who we are (and aren’t—those people somewhere else who eat snails or don’t sort their garbage).

The history of rules is rich in lessons for which rules work and which don’t, and under what circumstances. Take the case of rules governing who can wear what where. Unless you attended a school with a dress code, you’re unlikely to have encountered official rules of this sort (unofficial rules are a different story: just try wearing a tuxedo to a barbecue). But many cultures all over the world have tried to regulate dress in mind-numbing detail, and some still do: one of the demands of reformers demonstrating recently in Sudan was to suspend the strict rules dictating what women could wear in public, which threatened women caught wearing trousers with a flogging. Whether in the name of modesty, avoiding excessive expenditure, protecting local goods against imports, or enforcing the social order, these sumptuary regulations (from the Latin sumptus, meaning “expense”) tended to pop up whenever a city became prosperous enough for its richer residents to splash out in the latest style. By the thirteenth century, the codes of wealthy trading centers like Genoa or Venice read the like the medieval version of Vogue, as municipal authorities scrambled to keep track of the latest fashion—beaked shoes, ermine trim, wide sleeves, puffy pantaloons, you name it—and ban it.

Of course, this was a hopeless game of whack-a-mole, as anyone with experience of high school dress codes knows. No sooner had lace cuffs or boots with buckles been prohibited, than ingenious tailors and cobblers dreamed up some new fad, even more outrageous. No amount of fines, threats, and even occasional prison sentences worked to curb the voracious appetite for the next new fashion frill. Worse, people became expert in gaming the system: “Slashed sleeves, officer? Why, no—it’s just the lining poking through.” Worst of all, the rules that were intended to halt the relentless pace of changing fashion actually ended up accelerating it, as designers and their customers sought to evade sanctions based on last year’s hot items by coming up with novelties not yet banned (“beaked shoes are so 1470”). Amazingly, this cat-and-mouse game went on for hundreds of years; not until the eighteenth century did officials in Paris and other European metropolises throw in the towel.

Or perhaps not so amazingly. Take another example of that behemoth of rules that everyone except accountants loathes: the tax code. As in the case of the sumptuary rules, the tax code is maniacally detailed and becomes even more so as it is repeatedly amended to plug loopholes opened up by clever accountants who exploit every ambiguity and possibility not yet expressly prohibited. And like the medieval dress codes, this mare’s nest of detail is so complicated that it becomes even more ambiguous and difficult to enforce in practice. Contrary to the intentions of the legislators who frame the tax code, specifying what is and (mostly) is not allowed only encourages those with a motive to game the system—basically everyone—to invent yet more elaborate ruses. The resulting arms race may actually drive tax evasion, just as the medieval sumptuary regulations may have driven fashion.

What morals can be drawn from this episode in history of rules? First, detail and specificity can never eliminate ambiguity and interpretation—quite the contrary. This is especially the case when there is motive and opportunity for evasion, as medieval municipalities discovered when they tried to regulate dress and modern governments learn when they try to perfect tax codes. Second, failure, even abysmal, acknowledged failure for centuries on end, is not in itself a sufficient reason for giving up on regulation. Do not expect governments to surrender to tax evaders anytime soon. Third and finally, just because of the obstacles to enforcement, implicit norms work far better than explicit regulations in achieving the desired results. Only newcomers need to be told about the unwritten dress code for most social occasions, and violations are both rare and deliberate (for example, Marlene Dietrich’s calculated appropriation of male evening dress for dramatic effect in the 1930 film Morocco). And rules hobbled by their own maniacal detail and rubbery revisability are unlikely to coalesce into norms—a lesson for the next pandemic.

Lorraine Daston is director emerita of the Max Planck Institute for the History of Science (MPIWG) in Berlin, visiting professor in the Committee on Social Thought at the University of Chicago, and a permanent fellow at the Berlin Institute for Advanced Study. Her most recent book is Against Nature.