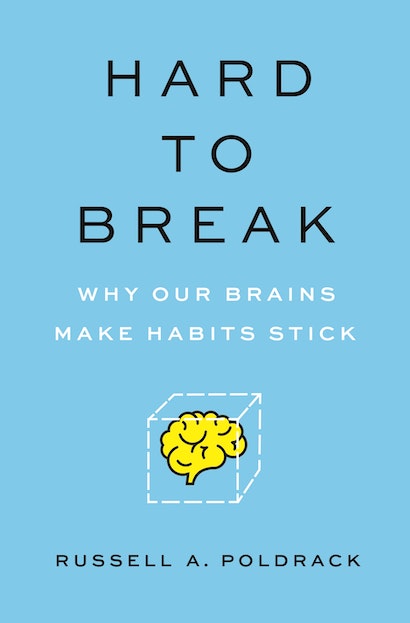 Hard to Break
Available in 2 editions
Buy This

Nearly all of us have habits that we would like to get rid of. It might be as innocuous as saying “um” too often when we speak, or as serious as a pack-a-day smoking habit. Either way, we know that changing our behavior is really difficult, even when the stakes are high. Research shows that when people try to stop a problem behavior (such as excessive drinking or smoking), only about a third of them succeed for at least a year. Which might lead us to ask: Why are habits so sticky?

The answer to this question lies in the fact that habits play a much more central role in our mental lives than we might think. Consider your morning routine, which might involve getting out of bed, preparing some coffee and breakfast, and reading the news on your digital device. Hidden in this routine are countless decisions that must be made: Which way do you turn the door handle to open the door? Do you turn on the coffee machine before or after adding the water and coffee? Do you use a fork or spoon to eat your cereal? Think about the paralysis that would ensue if you had to actually consider all of the alternatives around every possible action, and you will soon see how habits are very much our friend in general. It’s only when they cause us to make errors or when we no longer want them that they become a problem.

The stickiness of habits relates to directly to the fact that for the most part, the world is remarkably constant from day to day; once you learn to drive a particular car, the pedals are not going to change their function or location. At the same time, there are things that do change from day to day, such as the particular location that you park your car each day. The brain needs to know which things are stable and which are changing, and evolution came up with a clever solution to this problem: It built in different brain systems to do each one. The system that is in charge of building habits is centered around a set of regions deep in the brain called the basal ganglia, which are also the main target of the brain systems that produce dopamine, everyone’s favorite neurotransmitter.

Dopamine turns out to be critical to the development of habits. It’s commonly thought that dopamine relates to pleasure, but in fact dopamine plays a crucial role in telling our brain whether the world is better or worse than we expected. When we take an action that leads to an outcome that is better than we expected, a little squirt of dopamine gets sent to the habit system. This causes the connections between the neurons that produced that behavior to become stronger, so that the next time we are in the same situation, we are more likely to take the same action. It is this learning mechanism that gets hijacked by drugs of abuse, all of which have either a direct or indirect effect on dopamine neurons, and this explains why drug habits are particularly powerful.

If habits are so powerful, then how might we break them more effectively? Many people think that the answer is willpower or self-control, but research suggests otherwise. Studies that have tracked individuals and recorded their momentary urges show that people who report having higher self-control don’t actually suppress more urges than those who report having poor self-control. Self-control seems to be less important in overcoming urges, and more important for avoiding the situations where urges are likely to arise in the first place.

In fact, a key to defeating habits is realizing that once they are triggered they can be very difficult to stop. This suggests that the best way to defeat a habit is to prevent it from being triggered in the first place. Sometimes this is easy—a person with a gambling problem whose usual drive home takes them by a casino can take a different route—though in many cases it just isn’t possible to avoid the triggers. In those cases the best solution to changing behavior is to develop detailed plans for how one can avoid the unwanted behavior. Research has shown that people who plan their future actions around their behavior change goals are more likely to be effective in those goals.

The brain’s habit system is a magnificent feat of evolution, allowing us to navigate our world without having to expend cognitive effort on most of our actions. However, when it collides with the modern world, whose foods and digital devices are engineered to drive our dopamine systems, the habit system can instead become our enemy. By understanding how the system works, we can start to wrestle back control over our behavior.

Russell A. Poldrack is the Albert Ray Lang Professor of Psychology at Stanford University. He is the author of The New Mind Readers: What Neuroimaging Can and Cannot Reveal about Our Thoughts (Princeton). He lives in San Francisco. Twitter @russpoldrack