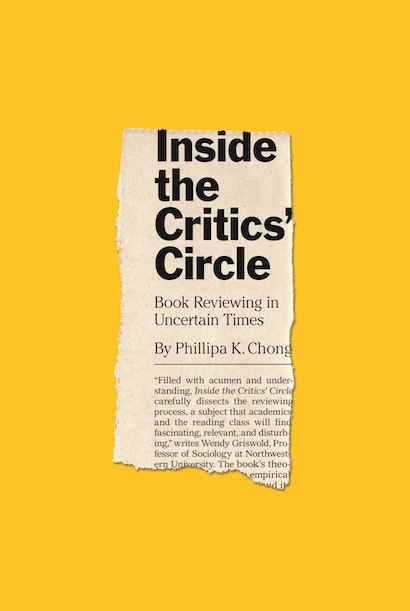 Inside the Critics’ Circle
Available in 3 editions
Buy This

In 2010, the Huffington Post compiled a list of “The Five Meanest Book Reviews Ever: Franzen, Foer, Larson, and more.” The chart included the following zingers:

Freedom by Jonathan Franzen
“The novel is a 576-page monument to insignificance. Franzen uses facile tricks to tart up the story as a total account of American life.” (B.R. Meyers, The Atlantic, 2010).

Extremely Loud And Incredibly Close by Jonathan Safran Foer
“Foer isn’t just a bad author, he’s a vile one. Why wait to have ideas worth writing when you can grab a big theme, throw in the kitchen sink, and wear your flip-flops all the way to the bank? How could someone so willfully young be so unambitious?” (Harry Siegel, NYPress, 2005).

The Girl With The Dragon Tattoo by Stieg Larsson
“This is easily one of the worst books I’ve ever read. And bear in mind that I’ve read John Grisham.” (Susan Cohen, Charleston City Paper, 2008).

These reviews aren’t just negative—they veer into the realm of meanness, or what I like to call snark. More than a critical appraisal, snark adds a layer of moral judgment. Keep in mind that the pull quotes aren’t even taken out of context—Siegel’s review of Extremely Loud And Incredibly Close is entitled “Extremely Cloying & Incredibly False.” The result is not just criticism, but a negative comment with a derogatory—even devastating—quality. And, obviously, it’s funny too (unless you’re the author).

Snark is always compelling, and probably the reason why outlets like HuffPo compile such lists. Indeed, as part of the marketing and publicity of my own book, Inside the Critics’ Circle, I was invited to, and complied, with creating yet another of these lists for Electric Literature.

While critics do not use the term “snark,” it’s a familiar concept, even if it’s tricky to define. Just as Supreme Court Justice Potter Stewart famously described his threshold test for obscenity, one knows snark ‘when they see it.’ Drawing on interviews for my book that I conducted with critics from influential review outlets, I’ve come up with a working definition.

The distinction between a negative review and a snarky one is ultimately subjective. But in critics’ vernacular, reviews that “go there” are known as “hatchet jobs” or “takedowns.” When I asked critics how they differentiated between a critical review and a “mean” one, they pointed to the reviewer trying to “score points off a failure by making himself [sic] look more clever or witty, or sharp, or talented in their own writing of the review.” But what is there to gain from mockery?

It all comes down to perception. Critics are writers, after all, and they might want to flex their muscles. Snark is about much more than communicating frustration—for instance, having to spend many hours reading a bad book and reviewing it for a modest fee. Rather, the critics I spoke to theorized that a key perceived intention is self-aggrandizement, through wit and cleverness.

Snark in reviewing manifests itself in at least three ways:

So what are these circumstances, and why do reviewers choose not to hold back? For some critics, writing snarky reviews is tantamount to an act of social justice, especially if the target is a commercially-successful author. The logic for many critics is that famous authors don’t deserve review attention simply because they are famous—often, they pull focus from another author who deserves the attention more, in a shrinking review landscape.

Even though critics don’t get to decide which books get reviewed—that’s up to the editors—they do get to choose the content of the reviews that they write. If they must review an inferior book by a famous author, it’s their responsibility to call them out. A form of poetic justice, served in 1000 words or fewer.