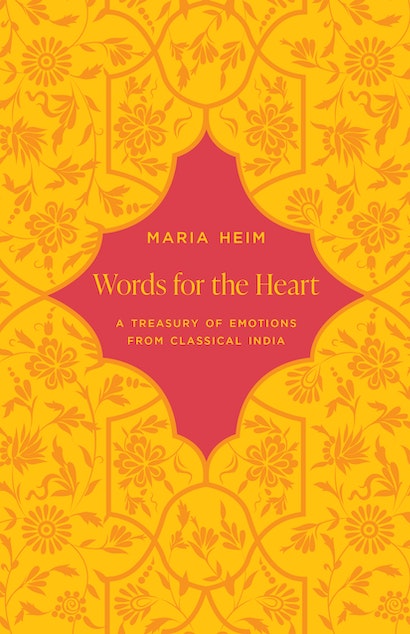 Words for the Heart
Available in 2 editions
Buy This

Ever have the feeling that you should know something, but you don’t yet know what it is? But wait, if it is unknown to you, then how do you know that you should know it? The ancient Buddhist sources from India have a name for this experience—the “I-will-come-to-know-what-is-unknown faculty” (anannatannassamitindriya). This faculty is an inner prompting to curiosity about things important for one’s life, a lifeline that clues us into the very fact that we don’t know something that may become valuable to us. It can be the starting place for new knowledge.

The “I-will-come-to-know-what-is-unknown faculty” is just one of 177 emotion-like terms I have collected in Words for the Heart, a “treasury” of words from ancient and classical India with vignettes that spring them to life. I say “emotion-like” because no single term in Sanskrit and related languages from classical India correlates exactly with the modern English word “emotion.” India’s sophisticated traditions of philosophical reflection on experience yield their own categories, exploring the nuances of felt experience with fine-grained particularity. Part of the pleasure of encountering these words is exploring the ways people living under different skies have conceptually carved up experience. The word “emotion” may seem universal enough today, but it may not be so when we consider that the way we use it is only about two hundred years old. Before that, people got along quite well interpreting their experience without it. Three thousand years of Indian intellectual history have generated alternative possibilities for how we might come to know what we feel.

A treasury is an ancient genre in India, where words, poems, or philosophical ideas are gathered into a collection. In the fifth century, Amarasimha, himself a gem at the court of the emperor Chandragupta II, composed the Treasury of Amara, a thesaurus providing synonyms for words used in nearly every sphere of life. The study of language had been under way for at least a millennium before Amara, and he cites precursors to his lexicon that have been lost to us. Amara’s Treasury, already valued by poets in India, traveled far beyond its shores—eastward as a seventh-century translation in Chinese, southward as it was rendered into Pali in Sri Lanka, northward as a Tibetan version in the medieval period, and westward to Europe as an Italian translation in the late eighteenth century. My Treasury continues this long-standing Indian love of collecting words and their meanings and then casting them abroad int the world—but unlike Amara, I focus exclusively on words related to emotion.

In this sense, the Treasury should be seen as a modern enterprise too, especially at a time when lists and lexica of emotions have great currency. Some scholars—Descartes, Darwin, Ekman—arrive at tidy lists of six or seven basic emotions (though they disagree about which six or seven). Other scholars aim not for brevity but for prolixity and inclusivity, as Tiffany Watt Smith does in her collection of 156 feelings from many languages (The Book of Human Emotions). She argues that we need more terms for emotions from across cultures, as they help us identify finer shades of experience. Mining literary, epic, philosophical, political, religious, aesthetic, moral, and medical texts in three of India’s earliest classical languages (Sanskrit, Pali, and Prakrit) may offer the English-speaking world a wealth of such terms.

Among other jewels, we find in these texts words for feelings that are familiar to English speakers but are perhaps more finely drawn in the Indian lexica. We have many shades of anger, for example—from simmering, unremitting rage (the epic heroine Draupadi keeps her celebrated anger at being assaulted on a ready low boil throughout much of the great Mahabharata) to fiery blasts of fury (the ferocity of her husband, Bhima, actually ignites sparks from his body at key junctures in the narrative) and everything in between. We get a fine-grained gradation of mirth in hasa, a word that refers to the smiles and laughter of amusement and hilarity. The full phenomenality of “funny” admits of at least six grades. First, we get a restrained smile evident in open eyes and raised cheeks but with teeth not showing. Then a gentle full grin, followed by a slightly less genteel giggle or chuckle, with eyes and cheeks contracted and a flush creeping over the face. After this, in cases of escalating hilarity, we find loud guffawing with head and body narrowing and shuddering. By the time one succumbs to the next degree of laughter, head and shoulders heave and eyes get wet. The last form is paroxysmal laughter where a violent scream rends the air and hands clutch splitting sides. In fact, I find it hard even to list these without cracking a smile.

However, the prize for the most exacting precision must surely go to the eleventh-century scholar, King Bhoja, who, in a treatise on literary aesthetics, carefully parses the nuances and varieties of attraction (anuraga), a word that spans the gamut from gentle affection to blinding erotic passion. He lists no fewer than sixty-four varieties of how humans may be attracted to one another. He then considers different circumstances, degrees of ephemerality, kinds of people, and other modalities that, when multiplied by each of the sixty-four, ultimately yield 12,228 possible nuances of attraction! If the neuroscientist Lisa Feldman Barrett is correct that increasing our capacity for “emotional granularity”—the richness of our conceptual vocabulary for experience—yields a wise and flourishing life, one may wish to gradually work up to Bhoja.

The Indian sources also suggest experiences that we don’t have a term for in English, though they can be made familiar with phrasing and discussion. The “torment of a tight spot” (amhas) was acute for the ancient Vedic pastoralists seeking open spaces in northern India where the blackbuck ranges. Buddhists celebrate a religious emotion called “rejoicing in others’ virtue” (anumodana), where the happiness of someone making merit or giving a gift is shared by observers, amplifying the good of the deed itself. The “conceit of self-loathing” (omana) suggests the subtlety of Buddhist conceptions of pride as a manufactured product of an obsession with self: I am the worst, truly despicable. No really, I am. I must insist. I am the very worst. Ever.

And, of course, there is the distinctive delight that flows from being free of regrets (pamojja), the sheer absence of the bad conscience that would otherwise nip away at our contentment. Pamojja leads to layers of joy, calm, and concentration that themselves prompt true wisdom. And then there are the morbid, not-to-be-denied desires that include pregnancy cravings (dohada). Stories abound of prenatal dohadas that indicate the deepest and otherwise-unspoken desires of the woman or the unborn child (we aren’t always sure which). In one case, a queen was gripped by the gruesome dohada to drink the blood from the right knee of her husband, the king, who kindly obliges. Her then-unborn child grows up to become the most famous patricide in the Buddhist tradition. Finally, I must mention the frissons of aesthetic and spiritual wonder that produce a smacking sound as the lips come together in surprise (camatkara). One sees instantly that something special has flashed before one—the gorgeous poetry and belles lettres of India famously evoke it. Such possibilities for how we may feel might just be enough to kindle the curiosity to discover what has been, until now, unknown to us.

Maria Heim is the George Lyman Crosby 1896 & Stanley Warfield Crosby Professor in Religion at Amherst College and a Guggenheim fellow. Her books include The Bloomsbury Research Handbook of Emotions in Classical Indian Philosophy and The Forerunner of All Things: Buddhaghosa on Mind, Intention, and Agency. She lives in Amherst, Massachusetts.