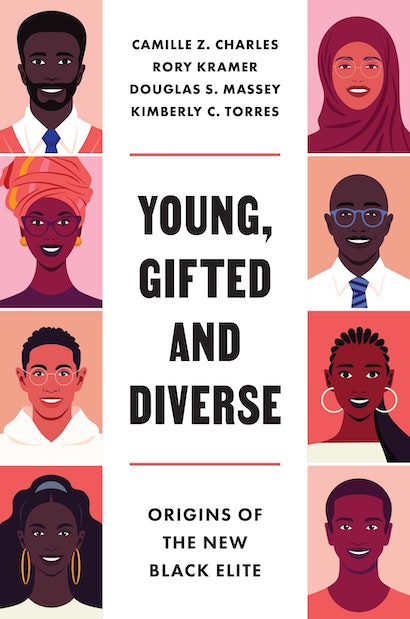 Young, Gifted and Diverse
Available in 3 editions
Buy This

Despite their diversity, Black Americans have long been studied as a uniformly disadvantaged group. Drawing from a representative sample of over a thousand Black students and in-depth interviews and focus groups with over one hundred more, Young, Gifted and Diverse highlights diversity among the new educated Black elite—those graduating from America’s selective colleges and universities in the early twenty-first century.

Who comprises the new Black elite, and what does this book aim to say about them?

The new Black elite that we studied were undergraduates students who graduated from a set of 28 selective colleges and universities circa 2003. They’re now just entering their 40s and are presumably ensconced in leadership positions in the nation’s professional and business enterprises. Their composition reflects changes in America’s Black population stemming from recent trends in interracial marriage, immigration, socioeconomic mobility, residential segregation, and incarceration, with the last factor implicated in producing an imbalanced sex ratio in the Black student population on elite campuses. These trends have produced a new Black elite that is dynamic but not representative of the wider Black population. Immigrant, multiracial, upper class, and integrated upbringings are overrepresented, as are people with lighter skin tones, whereas males are underrepresented. This book is our effort at explicating how those diverse and intersecting backgrounds do—and crucially do not—affect the new Black elite’s attitudes, perceptions, experiences, and outcomes.

Why does the Black elite complicate a monolithic understanding of the Black experience?

Young Black Americans experience quite variable life circumstances while growing up, depending on whether they are rich or poor, of immigrant or native origins, Black or of racially mixed parentage, and whether they came of age in integrated versus segregated schools and neighborhoods. Americans are increasingly familiar with the concept of intersectionality, which refers to how racial experiences and identities vary by gender and class. These other axes of diversity produce intersections that structure a multiplicity of Black experiences and outcomes. Confronting this complexity may help us understand why and how well-intentioned programs to support “Black students” fall short: they presume a stereotypical origin story (child from of a low-income, single-parent household raised in a segregated, under-resourced neighborhood and school), which is not the majority experience amongst the Black student population at elite schools.

How might the specific experiences of a Black college student/graduate shape their conceptions of race and belonging?

Owing to the persistence of both implicit and explicit prejudices, Black people are often treated differently in schools and in society depending on their gender identifications and skin tones, producing different outlooks, identities, and expectations. Elite college campuses also tend to reflect a White, wealthy, and professional culture that is less familiar to students who do not come from that background. Furthermore, immigration is a selective process, and Black immigrants hardly reflect their origin countries—they tend to have more education and occupational skill and are positively selected on unobservable traits such as risk tolerance and ambition. Many who come from predominantly Black nations in Africa or the Caribbean have little direct experience with anti-Black discrimination, so they pass on a more optimistic, self-confident outlook to their children. Finally, Black neighborhoods generally lack the resources of White or mixed neighborhoods, and poor Black neighborhoods tend to have higher rates of social disorder and violence that can have pronounced effects on health, wellbeing, and academic outcomes.

We find that one’s pre-college background affects not only their academic and social experiences in college but also how they experience being Black on campus. Many of our interview respondents spoke about searching for a Black student community or, alternatively, of feeling ostracized from the Black community because of their views on race and racism, their social strategies on campus, and/or their cultural dispositions. Interestingly, for many students, the experience of being in an elite environment fostered a shared sense of what it means to be a member of the new Black elite—to be individually optimistic but structurally pessimistic; to feel a sense of responsibility to help others, but to lack consensus on how best to do that.

How do other identities—such as gender, age, nationality, and so on—intersect within this group to produce different modes of belonging?

People are products of the genes they inherit from their parents and of their interactions with their societal environments. If these differ by class, gender, nativity, parentage, and experiences of segregation, they will generate a variety of outlooks, attitudes, and identities. As a result, different students may possess different amounts of social and cultural capital conducive to success at elite universities.

For example, consider dating. Few social experiences are as important to an individual’s sense of belonging and happiness as their romantic experiences, yet not all people are on equal footing here. Demographically, Black women outnumber Black men at these schools roughly 2:1, meaning that heterosexual Black men have a much greater opportunity to find a same-race romantic partner. Add to that the biases about the desirability of racialized women and men, and we see meaningful gaps in the likelihood of dating outside of one’s race and qualitative differences in romantic experiences.

Similar stories can be found about nationality and a sense of belonging with regard to foods, cultural organizations, music at parties, and so on. Because of differences in social class and backgrounds, we also find a wide range of adaptations to the elite world among Black students, ranging from an oppositional stance of trying to minimize social exposure to white students to a view of elite PWIs as an opportunity to assimilate with their white peers.

What can the future of political solidarity look like within such a diverse community?

The growing diversity of the Black population, which is particularly marked in the Black elite, is a reminder that broad racial categorizations hide a great deal of underlying variance, and refraining from such assumptions may allow us to know the people we encounter as individuals. At the same time, there seems to be a shared experience during the college years that contributes to the emergence of more similarities than differences in the attitudes and identities of this group, suggesting that—despite their diverse backgrounds and experiences—the Black elite can find significant political solidarity, both among themselves and with larger political coalitions.

What do you want readers to take away from this book?

We seek to instill an appreciation for the diversity of the Black student population attending institutions of higher education today. Through the case studies and analyses we present in the book, we hope that readers gain some understanding of how this diversity produces different challenges, experiences, expectations, and opportunities for different people and of how these change over four years of college.

We also hope that the book helps to move us beyond crude, oversimplified categorizations of Blackness so that institutions—including but not limited to elite universities—are better equipped to support the wide range of potential of all their students. At the same time, we should recognize that race provides a shared set of experiences and attitudes that, if engaged well by an institution, can provide a sense of belonging and purpose that benefits everyone.