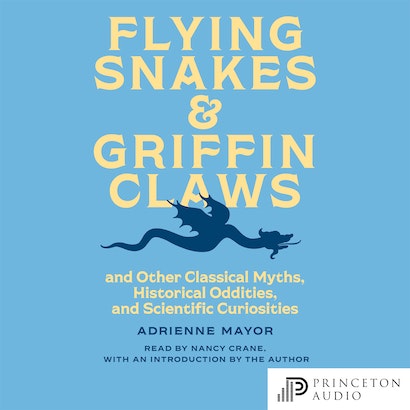 Adrienne Mayor is renowned for exploring the borders of history, science, archaeology, anthropology, and popular knowledge to find historical realities and scientific insights—glimmering, long-buried nuggets of truth—embedded in myth, legends, and folklore. Combing through ancient texts and obscure sources, she has spent decades prospecting for intriguing wonders and marvels, historical mysteries, diverting anecdotes, and hidden gems from antiquity, medieval, and modern times. Flying Snakes and Griffin Claws is a treasury of fifty of her most amazing and amusing discoveries.

The book explores such subjects as how mirages inspired legends of cities in the sky; the true identity of winged serpents in ancient Egypt; how ghost ships led to the discovery of the Gulf Stream; and the beauty secrets of ancient Amazons. Other pieces examine Arthur Conan Doyle’s sea serpent and Geronimo’s dragon; Flaubert’s obsession with ancient Carthage; ancient tattooing practices; and the strange relationship between wine goblets and women’s breasts since the times of Helen of Troy and Marie Antoinette. And there’s much, much more.

Showcasing Mayor’s trademark passion not to demythologize myths, but to uncover the fascinating truths buried beneath them, Flying Snakes and Griffin Claws is a wonder cabinet of delightful curiosities.

“If it were up to me, I’d replace the whole internet and two-thirds of telephony with Adrienne Mayor books.”—Ian Dreiblatt, Literary Hub