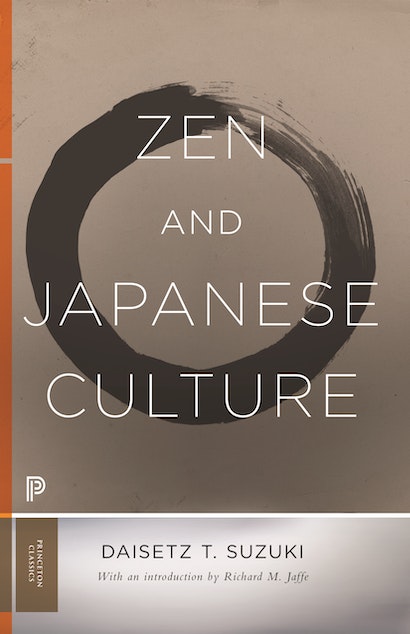 Buy This
Zen and Japanese Culture is a classic that has influenced generations of readers and played a major role in shaping conceptions of Zen’s influence on Japanese traditional arts. In simple and poetic language, Daisetz Suzuki describes Zen and its historical evolution. He connects Zen to the philosophy of the samurai, and subtly portrays the relationship between Zen and swordsmanship, haiku, tea ceremonies, and the Japanese love of nature. Suzuki uses anecdotes, poetry, and illustrations of silk screens, calligraphy, and architecture. The book features an introduction by Richard Jaffe that acquaints readers with Suzuki’s life and career and analyzes the book’s reception in light of contemporary criticism, especially by scholars of Japanese Buddhism. Zen and Japanese Culture is a valuable source for those wishing to understand Zen in the context of Japanese life and art, and remains one of the leading works on the subject.
Daisetz T. Suzuki (1870–1966) was Japan’s foremost authority on Zen Buddhism and the author of more than one hundred books on the subject. Richard M. Jaffe is associate professor of religious studies at Duke University.

"As one turns the pages of this delightful book, one seems to catch intimations of how and why certain aspects of the 'spirit of Zen' are making themselves felt in America today."—New York Times

"[In] Dr. Suzuki’s beautiful book . . . the cults of tea, sword, archery, garden, painting, handwriting are shown as separate petals of that precious efflorescence which, in spite of history, madness and the disturbed surface of the tangible world, are celebrated today, inside and outside of many golden pavilions."—The Nation

"This is one of those books you read to the last page without ever finishing; you keep going back for more—and finding it. . . . Zen and Japanese Culture covers familiar territory in unfamiliar ways."—Japan Times