A history of U.S. Civil War monuments that shows how they distort history and perpetuate white supremacy 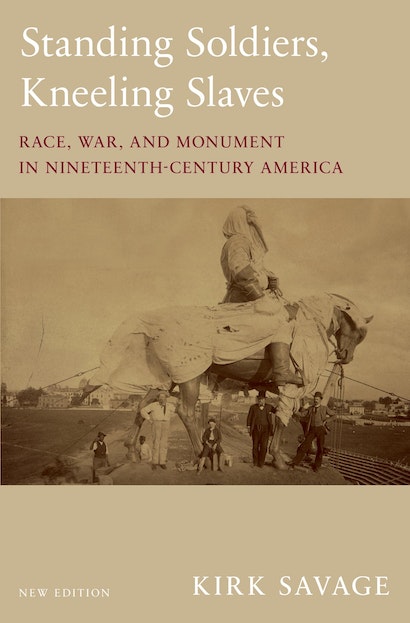 The United States began as a slave society, holding millions of Africans and their descendants in bondage, and remained so until a civil war took the lives of a half million soldiers, some once slaves themselves. Standing Soldiers, Kneeling Slaves explores how the history of slavery and its violent end was told in public spaces—specifically in the sculptural monuments that came to dominate streets, parks, and town squares in nineteenth-century America. Looking at monuments built and unbuilt, Kirk Savage shows how the greatest era of monument building in American history took place amid struggles over race, gender, and collective memory. Standing Soldiers, Kneeling Slaves probes a host of fascinating questions and remains the only sustained investigation of post-Civil War monument building as a process of national and racial definition. Featuring a new preface by the author that reflects on recent events surrounding the meaning of these monuments, and new photography and illustrations throughout, this new and expanded edition reveals how monuments exposed the myth of a “united” people, and have only become more controversial with the passage of time.

"In a fascinating study of public space and the less-than-public contradictions of nineteenth-century culture, Kirk Savage sheds light not only on memory and monument but also on the invention of the 'popular' itself." —Henry Louis Gates, Jr.

"An important and innovative work that will surely gain a wide scholarly audience. . . . My hope is that it will also gain the wider readership its message deserves among the civic leaders who shape public policy and the general citizenry who both inherit and build the public monuments that guide public memory. Though the story Savage traces is often a discouraging one, his message is ultimately hopeful. By understanding how we have defined our past and our present through the lasting medium of public sculpture, we can imagine how we can shape, and perhaps redeem our future." —Catherine W. Bishir, Journal of the Society of Architectural Historians