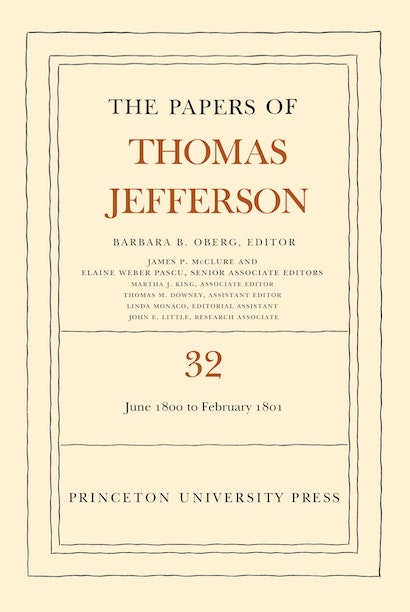 “I have sometimes asked myself whether my country is the better for my having lived at all?” Jefferson muses in this volume. His answer: “I do not know that it is.” Required by custom to be “entirely passive” during the presidential campaign, Jefferson, at Monticello during the summer of 1800, refrains from answering attacks on his character, responds privately to Benjamin Rush’s queries about religion, and learns of rumors of his own death. Yet he is in good health, harvests a bountiful wheat crop, and maintains his belief that the American people will shake off the Federalist thrall. He counsels James Monroe, the governor of Virginia, on the mixture of leniency and firmness to be shown in the wake of the aborted revolt of slaves led by the blacksmith Gabriel.

Arriving in Washington in November, Jefferson reports that the election “is the only thing of which any thing is said here.” He is aware of Alexander Hamilton’s efforts to undermine John Adams, and of desires by some Federalists to give interim executive powers to a president pro tem of the Senate. But the Republicans have made no provision to prevent the tie of electoral votes between Jefferson and Aaron Burr. Jefferson calls Burr’s conduct “honorable & decisive” before prospects of intrigue arise as the nation awaits the decision of the House of Representatives. As the volume closes, the election is still unresolved after six long days of balloting by the House.