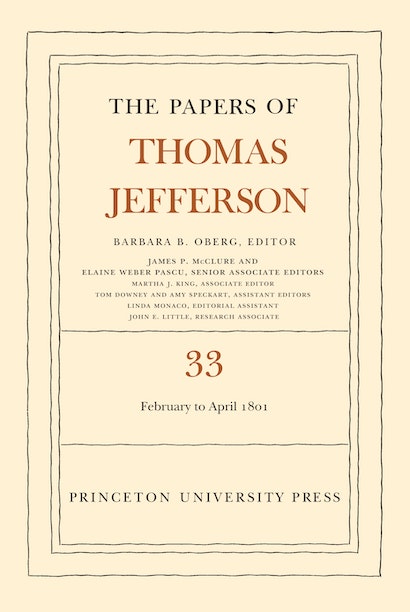 Under normal circumstances, Thomas Jefferson would have had more than two months to prepare for his presidency. However, since the House of Representatives finally settled a tied electoral vote only on 17 February 1801, he had two weeks. This book, which covers the two-and-a-half-month period from that day through April 30, is the first of some twenty volumes that will document Jefferson’s two terms as President of the United States.


Here, Jefferson drafts his Inaugural Address, one of the landmark documents of American history. In this famous speech, delivered before a packed audience in the Senate Chamber on March 4, he condemns “political intolerance” and asserts that “we are all republicans: we are all federalists,” while invoking a policy of “friendship with all nations, entangling alliances with none.”


Jefferson appoints his Cabinet members and deals with the time-consuming process of sifting through the countless appeals and supporting letters of recommendation for government jobs as he seeks to reward loyal Republicans and maintain bipartisan harmony at the same time. Among these letters is one from Catharine Church, who remarks that only women, excluded as they are from political favor or government employment, can be free of “ignorant affectation” and address the president honestly. Jefferson also initiates preparations for a long cruise by a squadron of American warships, with an unstated expectation that their destination will probably be the Barbary Coast of the Mediterranean.