A book that finally demystifies Newton’s experiments in alchemy 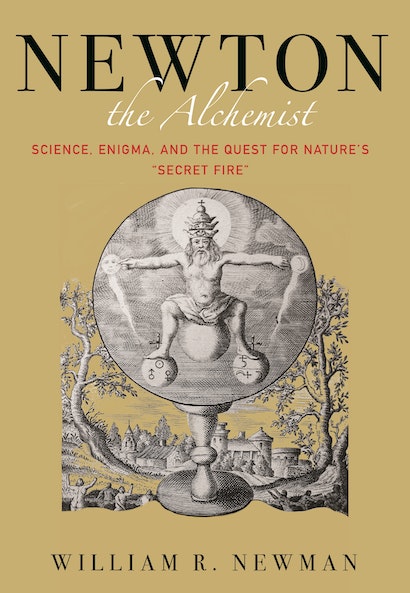 When Isaac Newton’s alchemical papers surfaced at a Sotheby’s auction in 1936, the quantity and seeming incoherence of the manuscripts were shocking. No longer the exemplar of Enlightenment rationality, the legendary physicist suddenly became “the last of the magicians.” Newton the Alchemist unlocks the secrets of Newton’s alchemical quest, providing a radically new understanding of the uncommon genius who probed nature at its deepest levels in pursuit of empirical knowledge.

In this evocative and superbly written book, William Newman blends in-depth analysis of newly available texts with laboratory replications of Newton’s actual experiments in alchemy. He does not justify Newton’s alchemical research as part of a religious search for God in the physical world, nor does he argue that Newton studied alchemy to learn about gravitational attraction. Newman traces the evolution of Newton’s alchemical ideas and practices over a span of more than three decades, showing how they proved fruitful in diverse scientific fields. A precise experimenter in the realm of “chymistry,” Newton put the riddles of alchemy to the test in his lab. He also used ideas drawn from the alchemical texts to great effect in his optical experimentation. In his hands, alchemy was a tool for attaining the material benefits associated with the philosopher’s stone and an instrument for acquiring scientific knowledge of the most sophisticated kind.

Newton the Alchemist provides rare insights into a man who was neither Enlightenment rationalist nor irrational magus, but rather an alchemist who sought through experiment and empiricism to alter nature at its very heart.

William R. Newman is Distinguished Professor and Ruth N. Halls Professor in the Department of History and Philosophy of Science and Medicine at Indiana University. His many books include Atoms and Alchemy: Chymistry and the Experimental Origins of the Scientific Revolution and Promethean Ambitions: Alchemy and the Quest to Perfect Nature. He lives in Bloomington, Indiana.

"[A] brilliantly detailed book. . . . Newman’s patient research has produced a masterpiece of scientific history . . . that will still be read in a century."—Dmitri Levitin, Literary Review

"Newton the Alchemist is unquestionably a significant reappraisal of one of the most iconic figures in the history of science. As such, the stakes are high, and scholars of Isaac Newton and the history of alchemy will no doubt grapple with Newman’s arguments for some time to come."—Tara Nummedal, Isis

"The most thorough, penetrating, and perceptive analysis of Newton’s alchemy ever to appear."—John Henry, Annals of Science

"Keeping a careful balance between the detailed reconstruction – and reproduction – of chymical processes and the portrayal of those authors and texts which influenced Newton’s practices, Newton the Alchemist will remain, probably for years to come, the most complete account – spanning on thirty years – of how the natural philosopher approached the quest for the Philosophers Stone. "—Lavinia Maddaluno, Nuncius

“Newton the Alchemist is a tour de force proving beyond any doubt Newton’s extraordinary debt to ‘chymistry,’ the alchemical art of analysis and synthesis. A magnificent achievement, this book stands as the definitive treatment of Newton on alchemy.”—Jed Z. Buchwald, coauthor of Newton and the Origin of Civilization

“The topic of Newton’s alchemy has been a cause célèbre for more than a generation, thanks to what too many people have viewed as a puzzling juxtaposition between the ‘rationalist scientist’ Newton and ‘irrational, pseudoscientific’ alchemy. The time is ripe for a new understanding of Newton and alchemy, and there is certainly no more capable person to do this than William Newman.”—Lawrence M. Principe, author of The Secrets of Alchemy