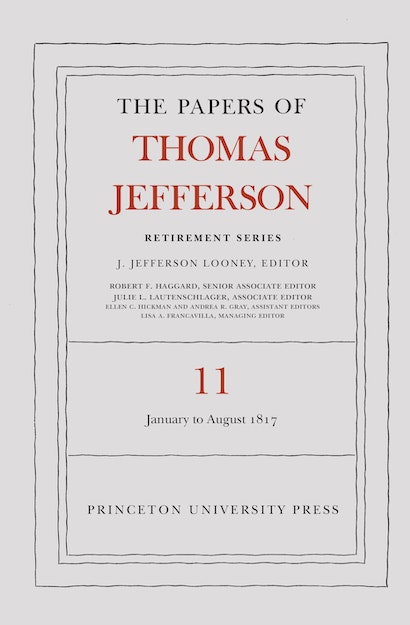 The 584 documents in this volume cover the period from 19 January to 31 August 1817, during which Jefferson devotes much time and energy to founding Central College, the predecessor of the University of Virginia. In May 1817, at its first official meeting, the college’s Board of Visitors authorizes land purchases and a subscription campaign that eventually raises more than $44,000. Jefferson also prepares a legal brief for his chancery suit against the directors of the Rivanna Company. After years of disagreements and failed negotiations, he composes and revises a legal statement of his claim to the property in dispute. Although the complaint is submitted to the court in May 1817, the case is not settled until December 1819. In March 1817 Jefferson’s friend James Monroe begins his first term as president. During the summer Jefferson learns of the death of two friends, Madame de Staël Holstein and Pierre Samuel Du Pont de Nemours. Late in the summer he visits Natural Bridge with two of his granddaughters. Jefferson continues to purchase books from Europe with the assistance of George Ticknor, and Stephen Cathalan helps him restock his wine cellar and pantry. Even though Jefferson answers his voluminous correspondence selectively, he still chafes under the burden.