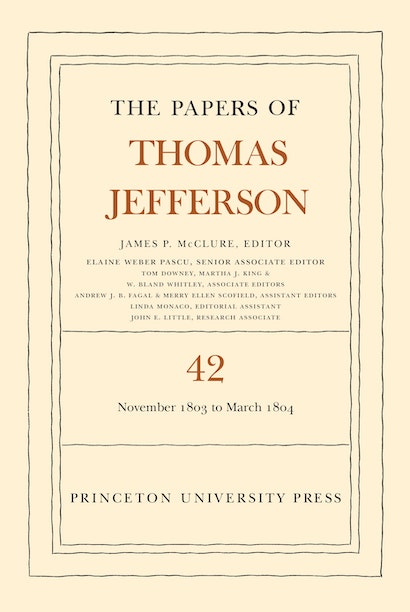 Confessing that he may be acting “with more boldness than wisdom,” Jefferson in November 1803 drafts a bill to create Orleans Territory, which he entrusts to John Breckinridge for introduction in the Senate. The administration sends stock certificates to France in payment for Louisiana. Relieved that affairs in the Mediterranean have improved with the evaporation of a threat of war with Morocco, the president does not know yet that Tripoli has captured the frigate Philadelphia with its officers and crew. He deals with never-ending issues of appointment to office and quarreling in his own party, while hearing that some Federalists are “as Bitter as wormwood.” He shares seeds of the Venus flytrap with Elizabeth Leathes Merry, the British minister’s wife. She and her husband, however, create a diplomatic storm over seating arrangements at dinner parties. Having reached St. Louis, Meriwether Lewis reports on the progress of the western expedition. Congress passes the Twelfth Amendment, which will provide for the separate election of president and vice president. In detailed notes made after Aaron Burr calls on him in January, Jefferson records his long-standing distrust of the New Yorker. Less than a month later, a congressional caucus nominates Jefferson for a second term, with George Clinton to replace Burr as vice president. Jefferson makes his first trials of the “double penned writing box” called the polygraph.