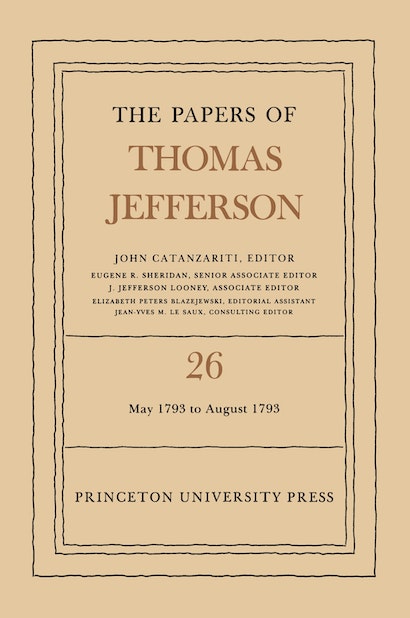 This volume documents exhaustively for the first time Edmond Charles Genet’s dramatic challenges to American neutrality and Jefferson’s diplomatic and political responses. After welcoming Genet’s arrival as the harbinger of closer relations between the American and French republics, Jefferson becomes increasingly distressed by the French minister’s defiance of the Washington administration’s ban on the outfitting of French privateers in American ports, the enlistment of American citizens in French service, and the exercise of admiralty jurisdiction by French consuls in American ports. Although the Supreme Court declines to advise the executive branch on neutrality questions that Jefferson prepares with the President and the Cabinet, he helps to formulate a set of neutrality rules to meet Genet’s challenge.


Unable to convince the impetuous French envoy to adopt a more moderate course, Jefferson works in the Cabinet to bring about Genet’s recall so as to preserve friendly relations with France and minimize political damage to the Republican party, in which he takes a more active role to prevent the Federalists from capitalizing on Genet’s defiance of the President. Grappling with the threat of war with Spain, Jefferson involves himself equivocally in a diplomatically explosive plan by Genet to liberate Louisiana from Spanish rule. In this volume Jefferson also plays a decisive role in resolving a dispute over the design of the Capitol and plans agricultural improvements at Monticello in preparation for his retirement to private life.