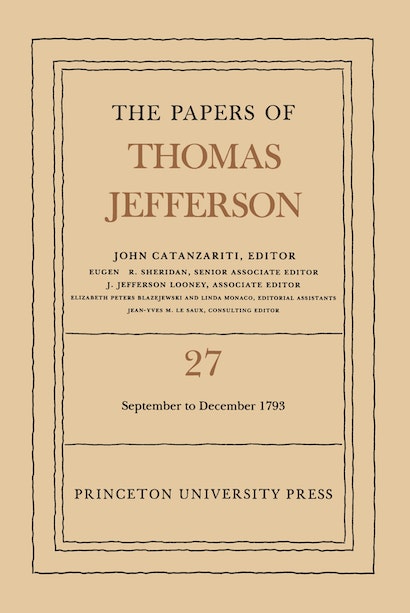 This volume brings to a close Jefferson’s increasingly stormy tenure as Secretary of State, documenting, among many things, his epochal duel with Treasury Secretary Alexander Hamilton over the conduct of American foreign policy. Against the background of the deadly yellow fever in Philadelphia, he copes with obstreperous French consuls and informs Edmond Charles Genet that the American government has requested his recall. After resuming his work on the definition of U.S. maritime limits, Jefferson prevails upon President Washington to inform Congress not only of Genet’s recall but also of the British refusal to carry out the disputed provisions of the Treaty of Paris. In a final effort to implement his policy of commercial retaliation against Great Britain, Jefferson submits to Congress in December his long-awaited Report on Commerce, vividly detailing the various forms of discrimination imposed on American trade by the British. The volume presents the early and final versions of the in all their textual complexity. Disappointed by Washington’s tepid response to his criticisms of Hamilton’s fiscal policies, frustrated by the Treasury Secretary’s rising influence over American foreign policy, and eager to enjoy uninterruptedly the pleasures of domestic life, Jefferson retires from office on 31 December 1793, determined never again to suffer the torments of public life.


Volume 27 contains a supplement that covers some 270 documents for the period 1764-93 that have been found or reclassified since the publication of the last supplement in Volume 15.